Computex is held each year in Taipei and is one of the premier computer shows on the planet. When I go, I find it very informative as a showcase for new products. One of the more interesting I found was the noiseless computer case from Zalman, the low-noise guys.

This case is simply beautiful, and the cooling design is quite interesting: 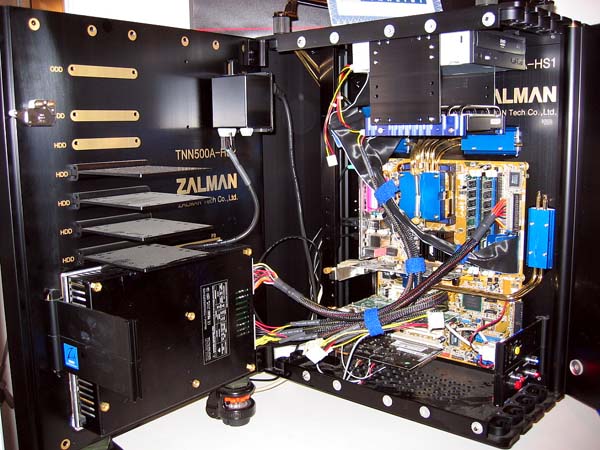 From this interior shot, you can see that cooling is done with heatpipes, and that the heatpipes are bolted directly to the case. Cooling is achieved by convection: 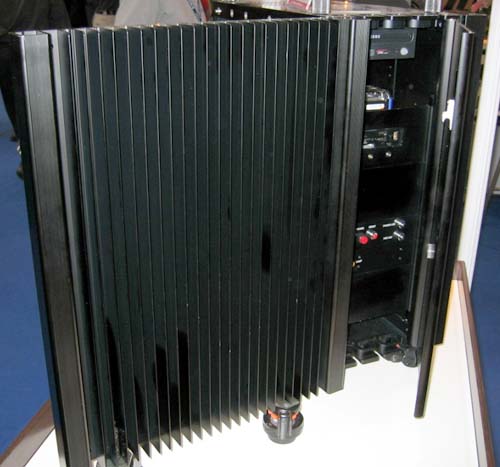 Each side is a large, passive heatsink, as this pic shows: 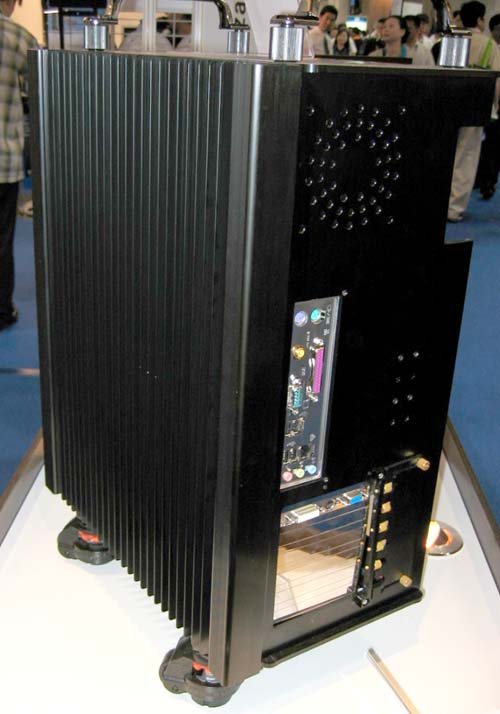 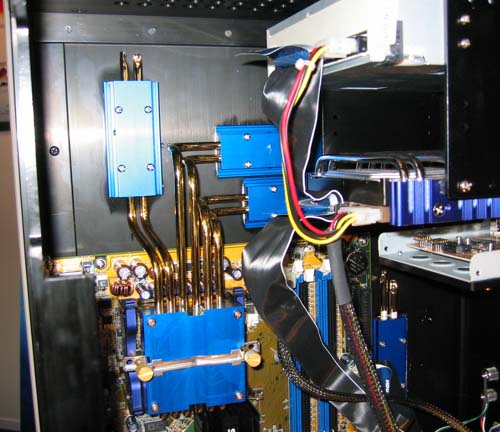 Video card cooling is done in a similar manner: 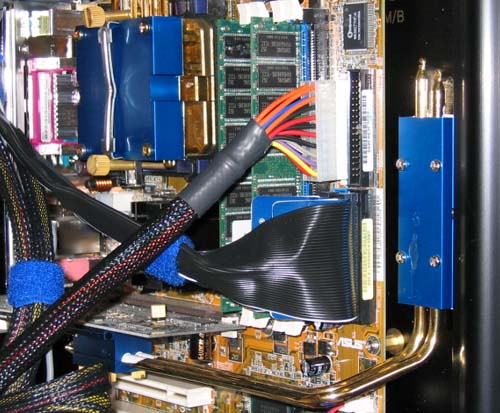 Note also that the power supply cooling is handled by bolting it to the large passive heatsink on one side:

Ergo – a totally noiseless case. If you can budget $1200, it’s yours; should be available this summer.

Water cooling is attracting a lot of interest and expect to see more entries from some familiar aircooling folks; Global Win is showing another entry which deserves a look: 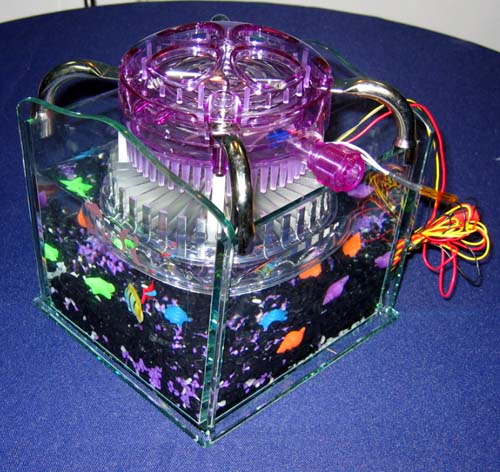 It’s called the Jeti – this is a watercooling setup that uses an aquarium as the radiator: 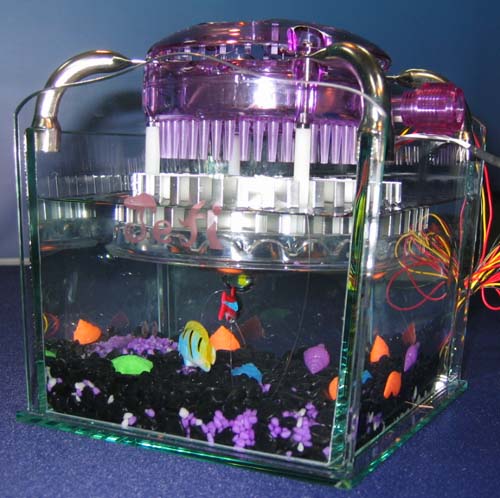 We have done some experiments in the past that used a 5 gallon reservoir as the cooling medium, and the Jeti is a step in this direction. The unit in the pics features a pump and cooling fins as part of the reservoir assembly – real fish are optional.

We’ve seen lots of new faces on the watercooling scene during the last 12 months; now even more activity is apparent as Hitachi joins the fray with an effort to drive watercooling into the OEM mainstream.

This is the unit that caught my eye: 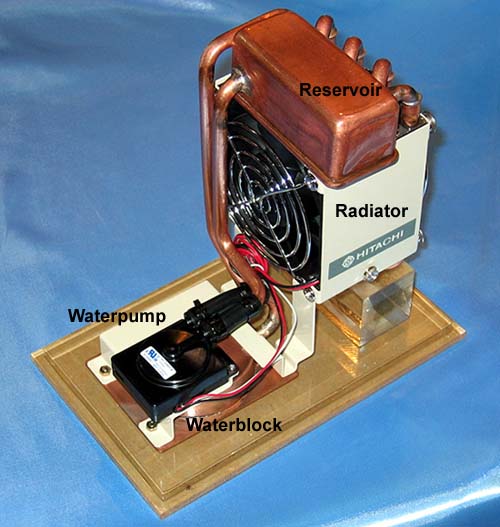 I labelled the key components – note that the waterpump is integrated into the waterblock. Also note that the tubing is rigid copper – this is not a unit aimed at the after market – it’s targeted for OEM sales.

Here’s a closer view of the waterpump and waterblock: 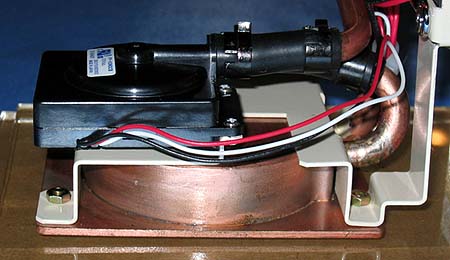 The radiator is a fairly conventional loop unit: 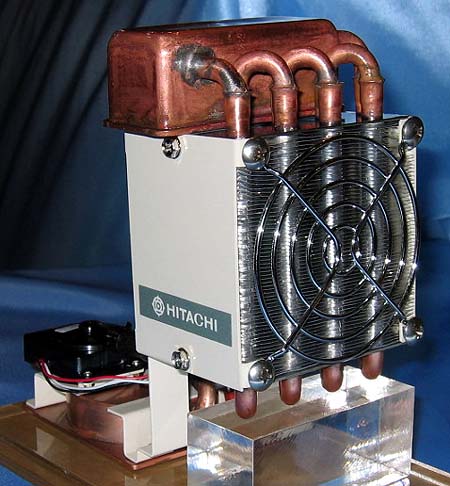 All told, a very nice package: 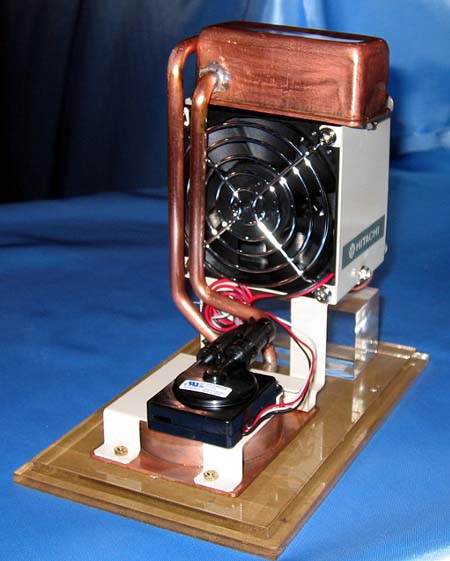 The unit shown above is designed for use in Cubes: 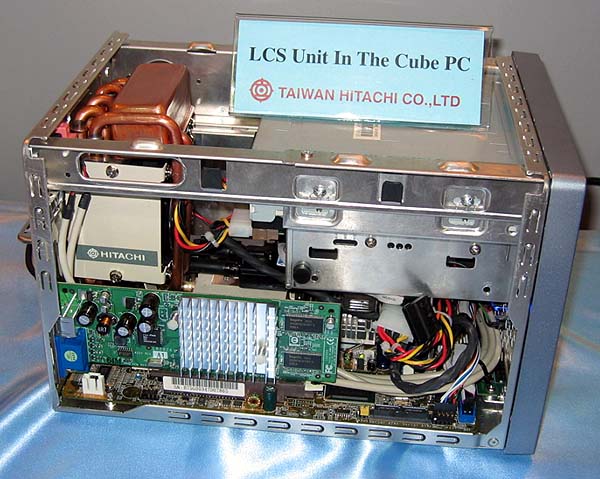 However, desktop applications are possible as well: 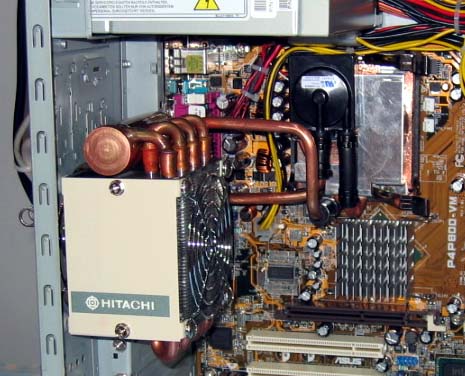 Of even more interest is the 1u product: 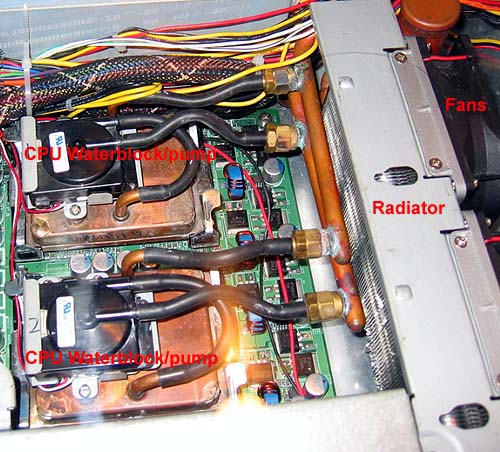 In this instance, the radiator is a low profile unit at the front of the server rack, with fans pulling cool air from the front through the radiator. Fans at the rear can help to exhaust warm air. Considering the design challenge for 1u server racks (minimal space), a water cooling solution looks to be a very credible option if it’s as maintenance free as claimed.

There is also an organization called the Liquid Cooling forum which was formed to promote liquid cooling applications: 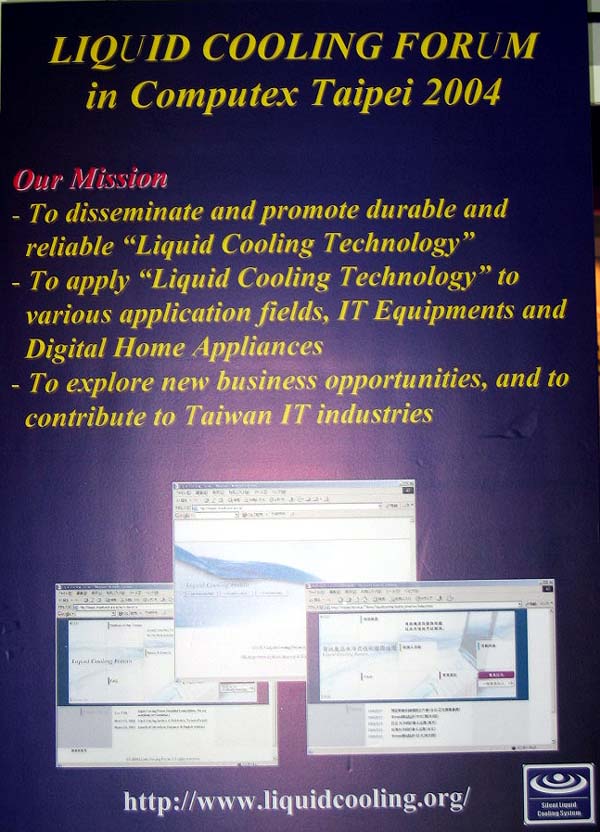 The forum was formed this May and claims to have 35 companies signed up. The intent is to drive liquid cooling from the DIY market into the mainstream OEM market – in other words, into the big time. For those of us who have used watercooling for some time, this is vindication of its efficacy as a mainstream cooling technology.

For consumers, I think we can expect to see more systems aimed at the aftermarket from larger companies – looks like the market is in for some new players. 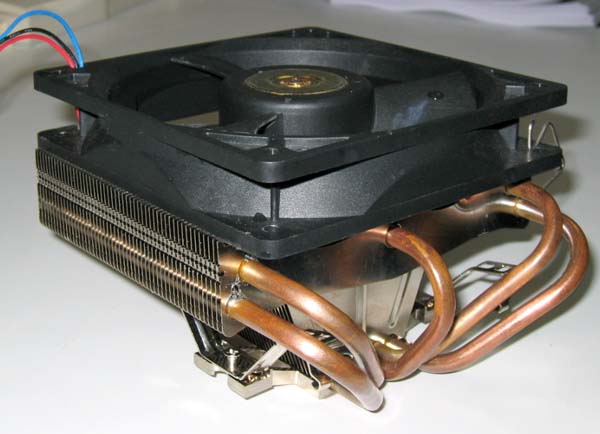 Thermalright is introducing what has to be the largest heatsink fan I have seen yet – that’s a 120mm fan on top of Thermalright’s latest P4 heatpipe heatsink. Make no mistake – this is a very BIG heatsink – the footprint is about 120mm x 150mm x 60mm, ex fan. 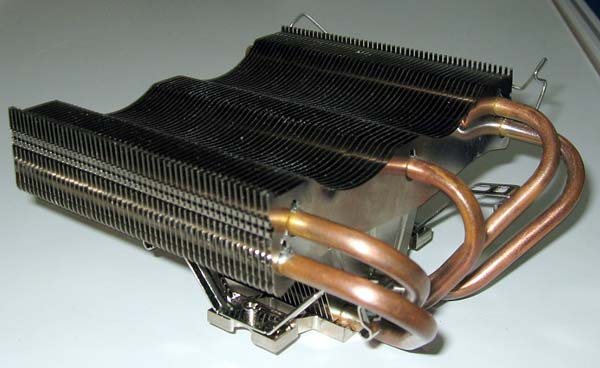 Thermalright went to this size in an attempt to deliver superior performance at low noise levels – they claim to get a C/W of 0.16 (top rank performance) with the 120mm fan spinning at 1350 rpm – very low noise at this speed. What is also noteworthy is this is NOT a heavy heatsink – it weighs in at about 370 grams.

A view from the side 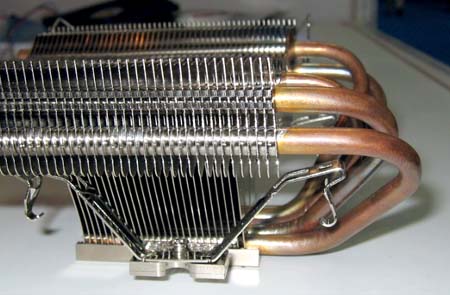 shows the P4 clip; there’s a fair amount of overhang which might serve to do some board cooling as well. A look from the bottom 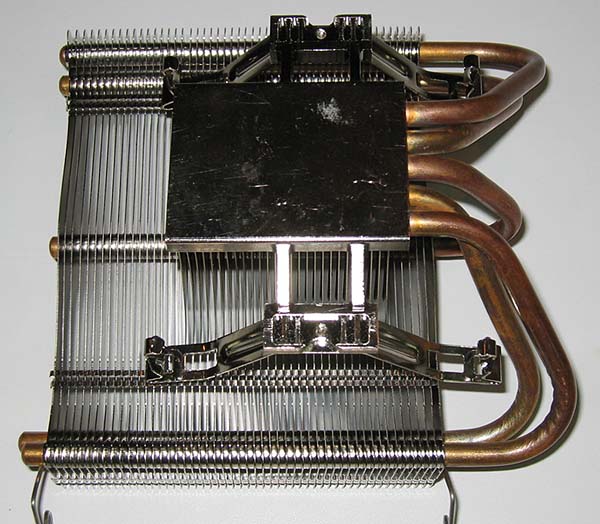 shows why this is so light compared to its size – the copper base encapsulates the heatpipes; heat is carried by the heatipes to the fins, which are thin stock. Hence, lots of surface area and not a lot of weight. 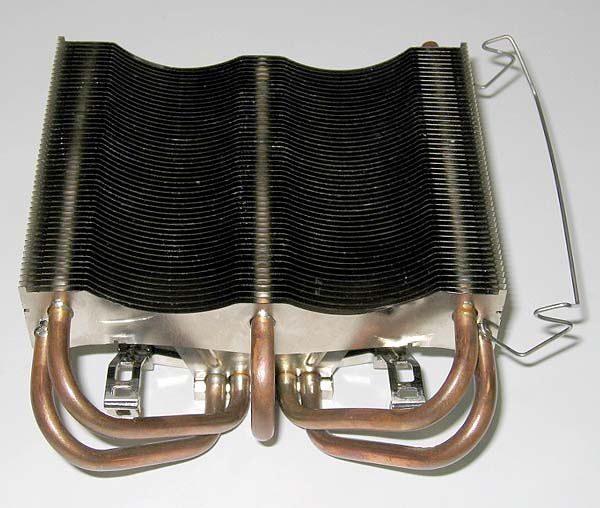 This unit should start shipping by early July; I should also note that the unit will be nickel plated, so the copper heatpipes will not be copper colored.

For readers with P4s, especially if you’re considering a Prescott, this latest Thermalright product just might give you the best of all possible worlds – excellent performance at low noise. Soon as I get one to test, I’ll get the results up ASAP.

1) On August 2, 2005, AMD introduced 90nm socket 939 Opterons, single-core capable. 2) Beginning in early October, the overclockability of low-end Opterons began to be noticed. 3) On October 31, 2005, AMD lowered the prices on many Opterons. In Read More

Some people didn’t like what I had to say about Hammer sales the other day. It proved to be a good test of AMDroidism. The more loudly and irrationally one squealed, the more likely it is the squealer has contracted Read More

Apple reduced the price on its 8GB iPhone by a third, or $200 yesterday, and believe it or not, people are actually protesting this. (You really should click on the link and read some of the threads, it’s not often Read More