NZXT seems to be on a roll recently. They have cases which are whimsical and stolid, take your pick. They have a variety of accessories. They have a line of AIO coolers (one was reviewed on our frontpage). Additionally they have put out a number of fascinating fans. We will review two kinds of fan here – PWM (for rads) and case fans. What we find out should be interesting.

The first NZXT fan that we shall consider is the FX V2 140mm Radiator Fan. NZXT says this about it (here):

This is the kind of fan that can be controlled by the CAM software we saw in our earlier review.

The next fan we will consider is the NZXT FZ 140mm case fan. NZXT says this about it (here):

Let us look at the specifications of these fans, then look at some pretty pictures.

Investigating the Packaging and the Fans

The NZXT FX fan comes in a retail box, this means you can hang it from a peg on a vertical display, with a window and the main specs on the front. Flip it over to see detailed specs and a diagram of the fan. It’s all nice and clean looking. And look at the diagram. The outline of the impeller looks familiar.

Let’s pull the fan out of its box and have a look. The frame is a nice combination of round and square, with the name NZXT on it in raised letters. The label has the model number, RF-FX142-NP, and the electrical specifications: voltage, amps and watts. The label also tells you that the fan has Nano bearings. Those should last longer than sleeve bearings without making the noise associated with ball bearings. Ball bearings aren’t noisy, but other kinds of bearings run with less noise. Also notice the plug, it is black against a dark background, but if you look carefully you will see it is a standard PWM plug. Finally, the rubber surrounding the screw holes are the advertised “rubberized corners” to attenuate vibration.

The intake side is clean, with no label or raised lettering. You can see where the vibration isolators carry through to this side. The impeller is very familiar (more later). All in all, this looks like it would make an excellent and quiet radiator fan.

Now we switch over to NZXT’s “140mm Airflow Fan,” the FZ. NZXT sent me two of these, so I can show you two boxes side by side, front and back. Again we have a retail box suitable for hanging on a display. The front has a window to see the fan, main specs, the fan’s name, and the NZXT branding. On the back side of the box we have all the specs in four languages. We also learn this fan was designed in Los Angeles. Inside you will find four screws and an adapter, a solid black Molex pass-through, which will give you 12 V and a ground for the fan.

Looking at the fan, first the exhaust side and then the intake side, we see where the frame differs substantially from the PWM frame. On the edges there are ports for LED’s, one per side. The label tells us this is an RF-FZ140-02 (model no. for the FZ140) with a Long Life bearing. It tells us the electrical specs and adds what looks to be an ODM’s model number. On the intake side we see the 13 blades the impeller carries, as well as a label sporting the OEM’s name. Note there are no vibration isolators here. You will have to get your own, a practice I follow when I can.

We see two oblique images here. The first is the FX140 V2. The second has a pair of 140mm Airflow Fans. Oblique shots give you more of the feel of a fan than frontal shots.

Here is a side-by-side picture of the NZXT FX140 V2 and the Thermalright TY-147A. The bladeshapes on the impellers look identical, with the possibility of the cut-off corners on the NZXT being a tad longer than the cut-off corners of the TY. This impeller is a mark of excellence. Until recently, the only way you could get this impeller in a square frame was to get the FX140 V2 from NZXT. It is still the only square frame fan with this impeller available with speeds up to 2000 RPM. You might find a faster fan with this impeller, but the additional airflow makes it a lot louder.

Next we have the NZXT FX140 V2 and the Noctua NF-A14 iPPC-2000. Note the bladeshapes on the impellers are similar, but not the same.

The fans were run in open air while their RPM and SPL were measured. The Sound Pressure Level was measured with a Tenma 72-942 at 10 cm. The reading was then adjusted to the industry standard 1 meter. Just when I was getting ready to measure CFM’s for this review, my anemometer died. Since the old anemometer was several years old, I did some studying. There was a new kind of anemometer for sale it was a lot less expensive than the old one, so I purchased and tested one. Not only did it read significantly lower than my previous anemometer, the lower reading was not consistent; I couldn’t trust it. So I ended up getting yet another of my original anemometer, the Extech AN100. New for this review are the small field of comparison PWM fans. Also new is the 30 fin per inch 140mm Koolance Radiator, so these PWM fans can be tested in a realistic rad environment.

Because this was all done with a new anemometer, all of the measurements had to be redone. Since the collective 140 mm case fan review some fans have been given away and two fans are in use. This means the field of comparison fans is less than it was, but there are still a lot of fans there.

The first picture shows a TY-143 mounted on the 30 FPI rad. At the corners are four 120-140 adapters scavenged from an old retail NF-P14. The fan fits the rad, but it’s not perfect: Some air escapes, for example. Fans with square frames of course fit the rad perfectly, but for now, we make do.

The second picture shows you the NZXT FZ140 mounted on a measuring box. The handle of the vane head of the anemometer can be seen through the dust filter, the same one used in measuring case fans.

The TY-143 was chosen in part because its blade shape is so much like that of the FX140 V2.

First, we will look at the PWM fan, along with two other 140 mm PWM fans that were running about the same RPM. Granted, the Noctua comparisons are industrial fans, and quite expensive, but this consumer NZXT fans held up well. The TY-143 fans ran at reduced speed under PWM control. At the mid-1900’s they could be compared to the NZXT PWM fan. Remember, though, the TY frames are round so they don’t exactly match up for rad work.

The NZXT fan was a match for the Thermalright fans. This should come as no surprise since their blade shapes were nearly identical. The Noctua fans ran a little faster and moved a little more air. Basically similar, especially if you keep the speeds in mind.

The next item on our agenda is PWM response. What is the PWM profile of the FX 140 V2?

You could call this profile an S-curve. For the lowest 20% it stays a little over 800 RPM while the highest 10% stays in the mid-1900’s. In the middle it sped up progressively.

Now, coming up to our last chart, I want you to remember that our anemometer is a retail device, not an expensive instrument that has been closely calibrated. So the results are approximate. What is important is not the absolute numbers, but the relative CFM’s and SPL’s of the fans. The chart shows the fan results in decreasing order from the most powerful, and the loudest, to the least powerful, with the RPM’s in the fan name column. Again, the NZXT results are highlighted in yellow.

You ought to be able to pick out the fan that meets your needs by examining the rogues gallery before you.

The FX140 V2 is a marvelous PWM fan which will spin up to 2000 RPM. Its blade shape puts it at the top of the PWM fans. There is nothing in its class and price range to match. On a tight rad, it runs neck-and-neck with a fan which costs a lot more. Further, its noise profile is identical. Usage on a radiator is the sweet spot for this fan. I had to tune a high speed fan down to match the FX140 V2. The performance of the NZXT was better.

The PWM profile gives you plenty of slop at the top and the bottom of its range while giving you the PWM speedup in the meat of its range. Don’t forget the nano bearings and the noise-deadening corners. Fine fan.

The FZ140 is a unique fan. Its looks are marvelous, but its performance is mediocre. Even so it adds to the looks of a rig without being a detriment. The best recommendation for this fan is to put it where it will be seen. 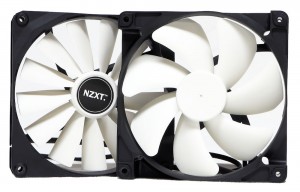 Noctua recently released the NH-P1 passive CPU cooler and NF-A12x25 LS-PWM low-speed 120mm fan. The much anticipated passive cooler is designed to cool modern high-end processors using only natural heat convection or typical case airflow using its six heat pipes and loads of engineering. The NF-A12x25 LS-PWM fan is designed to assist the cooler in a semi-passive configuration. The PWM function allows the fan to stop during lower loads or rotate up to 1200 RPM under high loads. At full speed, it produces only 12.1 dB. The NH-P1 cooler is listed for $109.90 while the A12x25 LS-PWM fan is $29.90 and is currently available through Amazon. Here is the press release for Noctua.

Fractal Design just released details on a new small form factor chassis with an emphasis on “design” of course (it’s in the name) and quiet operation. The Define Nano S is compatible with ITX motherboards and even has space for a water cooling setup. This sleek case would look great next to an entertainment center.