Who said all fan controllers are created equal? Certainly not Overclockers.com, in fact just in the past six months, we looked at several different fan controllers, analyzing performance and design. After investigating the offerings from several top manufacturers, including Lamptron (FC-2 and FC-3, FC-5), Scythe and even an older NZXT model, clearly the new NZXT Sentry LXE is by far the best-looking fan controller out there. 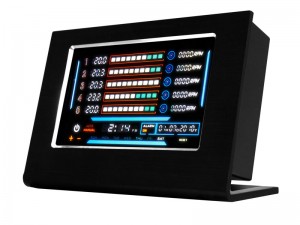 This controller distinguishes itself from the competition with its dashing good looks, but also with its unique configuration. No 5.25″ bay necessary, the controller is external and connects to a faux PCI card:

Let’s take a peak at what else it has to offer (Courtesy: NZXT press release):

While its certainly pretty, the wattage per channel is something worth noting – you won’t be able to control the number of fans with this you’d be able to control with other items like those we’ve looked at from Lamptron. With 5 channels claiming a maximum of 10 watts each, this controller is targeted at people interested in powering medium performance fans independently. Those looking to power 2 medium performance fans off a single channel on this controller would likely be exceeding the controllers ratings. If you have a high performance fan, like a delta which pulls greater than .8Amps (.8Amps x12Volts =9.6 Watts), you may exceed the 10W per channel this controller is rated for and a different model may suit your needs better. (Math and analysis courtesy of I.M.O.G.)

Not sure exactly how these controllers will stack up against high-powered fans just yet, but the retro futuristic styling is certainly easy on the eyes. NZXT has said the Sentry LXE Fan Controllers will hit the shelves within the next two weeks. It is likely Newegg will be the first to offer this product. MSRP has been set at $59.99, quite reasonable for such a pretty package.