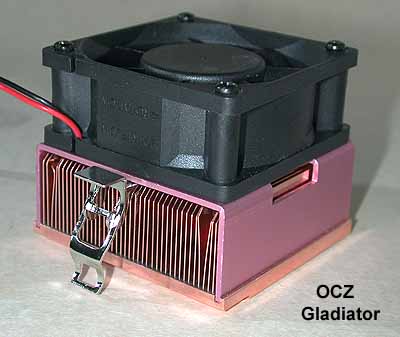 The Gladiator weighs in at almost 400 grams.

Overclockerz (No Relation) was kind enough to send a sample of their all copper Gladiator to test out. The Gladiator measures 2 1/2 x 2 3/8 by 1 1/8 high, weighing almost 400 grams. Its construction utilizes very thin plates (about as thick as an index card) that are press fit (I think) into the base; this approach yields 18 fins/inch for a total of 40 fins, much denser than possible with an extrusion or by saw cut. 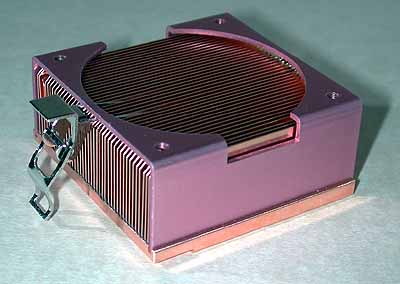 This results in about 1 square foot of surface area, which is a LOT of cooling surface. The problem with a heatsink this dense is the fan must be powerful enough to push air through the fins. The fan is a Top Motor which is rated at about 36 cfm @ 6500 rpm, 2.4 watts; I could not verify the ratings as Top does not appear to have a website. However, the noise level measured 68 dBA 8″ from the fan’s intake, which is 1 dBA lower than the Delta 38. The fan ships with a four pin power plug, so rpm readings are not possible.

I felt around the base of the heatsink under power and the airflow through the fins is noticeable but not overpowering. Under stress, I felt the heatsink and it was lukewarm to the touch with the Duron and barely warm with the Celeron; I don’t think the Gladiator is close to saturation at these levels.

The sample I received was very well finished with a relatively smooth base – no heavy machining marks. It looks like the copper cover is press fit and glued into the base, as I did see some glue-like residue at this joint. I could not determine how the fins are attached to the base, although it does not look like they are soldered or brazed.

The clip is quite good – easy to get on and off without a screwdriver or pliers. It rides between fins, so there is no “clip gap” so common on other heatsinks. It’s very difficult to see exactly how it is designed, but it rides above two rods that are used to hold the fins apart and in place. There appears to be two legs which contact the heatsink’s base, giving it the fulcrum to exert force on the CPU.

The fan is held on by four bolts threaded into the top. A minor complaint: The bolts are a touch too long and crimp some fins, as shown below: 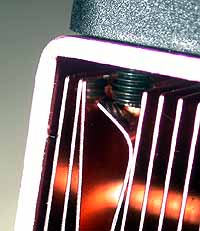 I prepared the Gladiator by boring a hole through the base so I could epoxy a thermocouple above the CPU. The thermocouple is attached to an Omega HH23 Digital Thermometer. Ambient temps were measured with a thermocouple placed about 1 inch from the fan’s intake. I used Prime 95 to stress the CPU on an ABIT KT7 running a Duron 800 @ 1000 (63.1 watts), a T-Bird 1133 @ 1397 (93 watts) on an Iwill KK266 and a Celeron 533 (19.9 watts) on an Iwill W02-R. Arctic Silver grease was used in all tests.

OCZ’s Gladiator does a very nice job. Large surface area and copper, coupled with a 36 cfm fan, does a very good, but NOISY, job. Its compact size ensures that it should fit any Socket A/370 motherboard. No question copper will be the material of choice for the next round of heatsinks.

Thanks again to Overclockerz (No Relation) for sending me this sample.