Overclockerz (no relation) was nice enough to send us a sample of their OCZ Performance Series Micro BGA PC-166 (3/2/2) SDRAM to test out. The chips are labeled “TONICOM”. I used a test suite from Ultar-X Inc. called QuickTech Pro. This utility performs a number of memory tests to burn in and identify malfunctioning SDRAM modules. The tests it performs can be used to identify the highest stable FSBs for a particular motherboard/SDRAM combination.

Testing includes over 24 testing algorithms using unique methods developed by Ultra-X to validate RAM with maximum amount of data traffic. Some rely on stressing the bus with data throughput to achieve a full load to create a failure that would occur under standard or stressful use, like running Prime 95.

I have found one test in particular that many modules fail – the Jump Test. According to Ultra-X “Failures in this test will manifest themselves as Windows load failures in Win NT and Win 98 and above. You may also experience Blue screens under Windows if this test fails.” I can verify that this is the case.

To test OCZ’s PC166, I ran the test suite with it and Crucial’s PC133 CAS 2; both modules were 256 MB. I used the Iwill KK266 with a T-Bird 1133 to find the highest, stable FSB each module would run without errors (I also used the Koolance case – very well behaved). I also backed off the multiplier at the best FSB to ensure that the CPU was not causing errors.

I took a screen shot (literally) of a failure pattern, this being the PC166 @ 155 FSB, fastest settings: 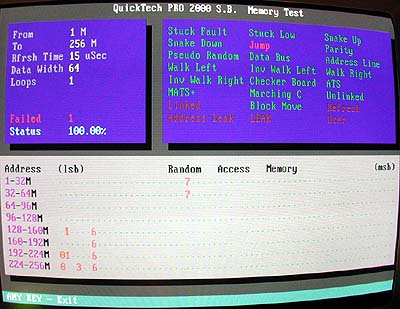 With a schematic for the memory module, you could identify which chip fails. Tests were run until no failures occurred at the highest FSB/multiplier combination.

The following table lays out the critical timing characteristics of each module:

From this, you can see that the OCZ SDRAM PC166 is generally less aggressive in its specs than Crucial’s PC133. To determine best stable speeds, I ran each module on the Iwill and tested to find the highest CAS2 and CAS3 speeds. I used Iwill’s Turbo BIOS in all tests. Once the highest speed was determined, I ran multiple tests to verify that result was not a fluke.

I was not able to run either module beyond 164 MHz using Iwill’s most conservative settings. The Crucial was able to run a tad faster than the OCZ, but not significantly so – really a draw. I also tested each module at lower multipliers to eliminate any possible CPU speed issues with the same results.

Based on these tests, OCZ’s PC166 does not perform significantly better than Crucial’s PC133 CAS2, even with OCZ’s less aggressive timings. We will test additional modules as they become available, but between these two, I would buy on price.

Thanks again to Overclockerz Store for sending us the SDRAM for testing.

G.Skill has some new memory that won’t interfere with large coolers that many overclockers use.

A no-brainer for hot RAM – Joe