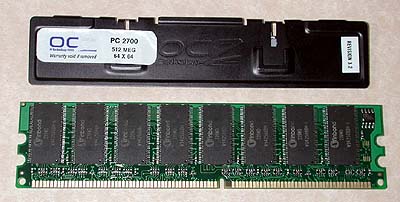 After I did the testing, I carefully removed the aluminum heatspreader to see what’s underneath: 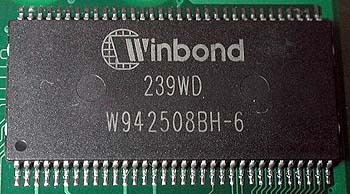 A side note: I’ve taken off aluminum heatspreaders on a few chips and, IMHO, I think they are close to worthless. I’ve found that at best, the sticky tape used contacts something like 30% of the chip area. This is like using thermal grease on less than half the CPU.

Further, I seriously doubt that the heat transfer from the tape to the aluminum heatspreader is all that great. Removing the heatspreader on any RAM voids warranty and possibly could damage the RAM, so I’m not advocating anyone do this at all. However, if you can get RAM without the heatspreaders, I think an 80 mm fan aimed at the DIMM slots will do a LOT more good.

Interesting that Crucial does not offer their RAM with heatspreaders (I spoke to them about it – “not necessary”) – is there a message here?

I tested the OCZ PC2700 using an ABIT BD7II RAID motherboard (250 FSB max) with an P4 1700, running at an 8x multiplier (this is an Intel Engineering Sample); this avoids any issues due to the CPU running out of spec. PCI settings were fixed at 33 MHz. I boosted RAM voltage to 2.7 volts.

To test the RAM, I used Ultra X’s RAM Stress Test Professional (R.S.T. Pro). This is a stand-alone PCI card – it does not need hard drives or an OS to run. The motherboard boots up and then the R.S.T. Pro takes over. The testing is quite rigorous and, after running at least 5 loops, will identify problems down to the chip and sectors within the chip.

I ran two tests at different RAM timings with the following results:

OCZ’s PC2700 rev 3.2 runs a little better than their spec with aggressive memory timings (consistent with OCZ’s claim) and about 14.5% better at more conservative timings.

Thanks again to Ramstore.ca for sending this our way.

Antec has just announced it’s latest product in an already impressive line-up, the Katana. This RGB DDR4 features Dual channels and will be available in frequencies of 3200Mhz and 3600Mhz with CAS latencies of 16 and 18 respectively. Read More

Corsair just announced the launch of the Vengeance RGB PRO SL line of memory kits. Initial availability will be for frequencies up to 3600Mhz with capacities of up to 128GB (4x32GB). What sets these apart from the existing Vengeance RGB Pro line, is the height. The SL versions will measure 44 mm tall as opposed to 51 mm and should allow for more compatibility with CPU coolers. Available in black or white, the Vengeance RGB PRO SL also features 10 addressable RGB modules. At the time of this writing, pricing was only available for the 3200Mhz 2x8GB kit, it has been set at $104.99. Read More

Would some RAM help improve your holiday spirits? Perhaps your Christmas cheer needs a little pick-me-up? G.Skill has a contest with your name on it! Read More