I have had a long-standing hatred for the clip retention system most HSFs use. With the exception of a few designs, they are an accident waiting to happen. If you’re an active Overclocker, doing experiments to try to gain those few extra megahertz of performance, your HSF rarely goes on the CPU only once and never comes off after that.

I fall into that category and have suffered my share of chipped cores, broken socket lugs and generally an acid stomach any time I have to use an HSF that employs the clip retention system. I am not challenged for needle-nosed pliers and dental picks, nor am I a klutz. I am lazy and in the heat (no pun intended) of an idea, I do not like to have to completely remove my motherboard from the case just to change the HSF. For all their bad design, the clip system is a lot friendlier when you can access it with the motherboard outside the case.

The time necessary to perform an experiment, which involves removing and re-installing the HSF repeatedly, would be astronomical, if I had to remove and re-install the motherboard every time I took the HSF off. In my mid-tower, using my KT7A, there is not enough room between the CPU socket and the PSU to get in there with needle-nosed pliers, and in the case of the KT7A, barely enough room on the other side, depending on the clip style, because of the “wall” of electrolytic capacitors.

When I bought my Swiftech, MC-462A HSF, I was impressed with the retention system they chose to use. Despite the inconvenience of having to remove the motherboard once and install the threaded stand-offs in the holes surrounding the socket, it is a reliable retention system and virtually foolproof. I wish more HSF manufacturers would use it, including the Millenium Glaciator.

I was disappointed to learn that Millenium chose to go with the nefarious clip system instead. As HSFs get bigger and heavier, to support the increased wattage generated by CPUs, this issue may solve itself, as the clips don’t do well with motherboards standing up sideways (tower cases) and heavy, tall HSFs pulling on them. Time will tell.

I was standing outside where I work, looking at the guyed radio tower and an idea came to me. The timing was good, because I was about to embark upon a lengthy experiment with a ThermoEngine HSF and did not look forward to the many mounting and dis-mounting cycles in the experiment. Therefore, I decided to step “Outside the 9 dots” yet again.

The whole challenge is to keep the HSF firmly and flatly seated against the CPU core, regardless of whether the motherboard is horizontal or vertical. The additional challenge was to make a retention system that was also easy and safe to put on and take off.

Take a broom and try holding it horizontal, grasping it by the very end with one hand. Wow, that’s a lot of leverage to work against! That’s the kind of challenge a conventional clip system has to deal with. Now, tie a cord to that broom just below the head, hold it in one had by the very end and hold the cord in your other hand above your head. Wow, no sweat! You have just observed the guying effect. Here’s how I took that idea and implemented it:

Those four stand-offs from the MC-462A were definitely on my assets list for designing a guyed HSF retention system. I went to the local hardware store, armed with a strain gauge to peruse their coiled spring inventory and found four springs that met the AMD pressure standard.

Now, it gets interesting:

How to attach those springs to the HSF and stand-offs without “re-inventing the wheel”. I purchased some brass slotted pan head screws that fit the threaded interior of the stand-offs. I bought some bronze split ring lock washers. Why brass and bronze, you ask? Simple, they can be soldered together very easily. 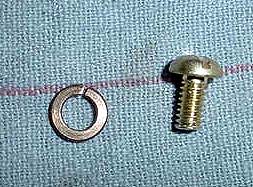 I fashioned this simple screw-in assembly with an eyelet. I could probably have searched around and sourced a threaded eyelet, but this was a more timely solution. I then bent the spring ends to allow them to be fastened securely to the screw/eyelet and a convenient anchor point on the HSF.

The four springs have to be the right length and as equal in tension as you can find, in order for this to work properly. I can assure you that they are and do, and it didn’t take a lifetime to locate them.

Lets put it all together now. You will need to buy the standoff mounting kit from Swiftech. I think it goes for around $4.25 (US). They have instructions for installing it on their Web site. Even if you abandon the project you can leave them installed as they don’t get in the way of anything. First, you will have to solder up the screws and washers to make the eyelets. I used a Weller soldering gun, but any 50-100W iron will work fine. 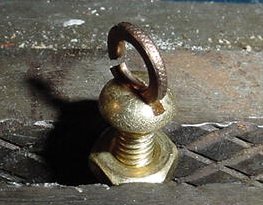 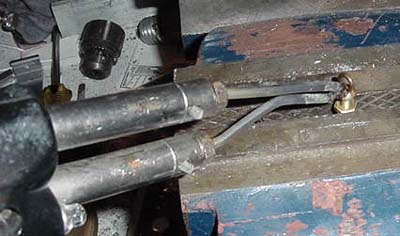 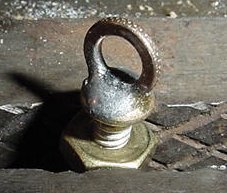 Now you have to re-form the springs to fit the job. I bought 5 of them and practiced on one. There is no way to describe this part of the process. You have to feel it out, hence the practice spring. It is not Rocket Science, nor a highly precise procedure. You just need ” A cool hand, A keen eye and Horse Sense.”

Screw the four eyelet/spring assemblies into the four threaded stand-offs. 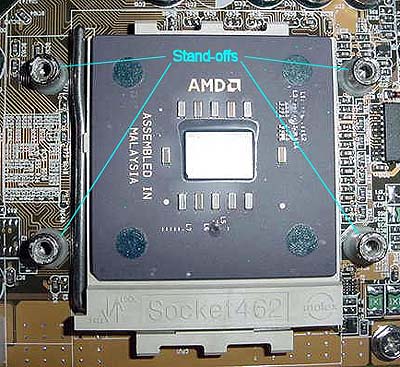 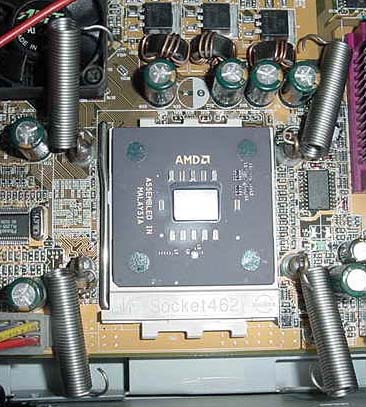 Prep your core with an appropriate thermal grease, just like if you were using the conventional clip system. Place your HSF on top of the core. Hold it firmly where you want it to eventually reside. Using either a spring stretching hook or needle-nosed pliers, hook each spring on one of the fan mounting holes on the top side, or whatever convenient point you can find, as long as there are four of them.

Once all four springs are attached to the HSF, you can let go. If you chose your attachment points wisely, have four springs of the same tension and length, the HSF will not drift one way or the other. All the same, give it a slight wiggle to feel it is where it wants to be and does not rock without a struggle. You’re all set. 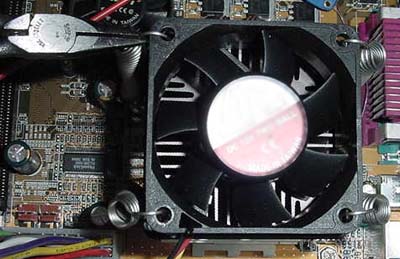 I have the advantage of a thermocouple drilled right into the HSF base, so I could watch the temperature as soon as I threw the On/Off switch, as opposed to having to wait until the system booted and I could launch a hardware monitoring program. As expected, it did not skyrocket, but slowly crept up to the normal operating range. All the same, I had one hand on the On/Off switch, one hand on the AC cord and both eyes glued to the digital thermometer.

Remember: Initially this was an untested idea. Not any more – it works great! I flipped the case upright, placing the motherboard on its side and the temperature did not flicker one bit, nor did the HSF slide off into CPU oblivion. I bonked the case in every conceivable plane and the HSF did not drift. Voila!

Here’s how the ThermoEngine looks: 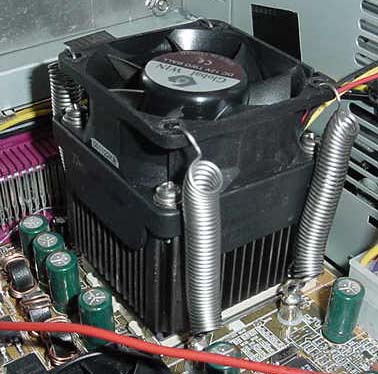 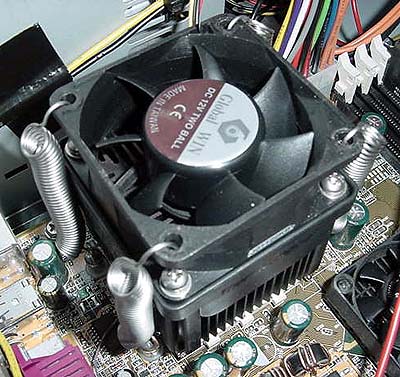 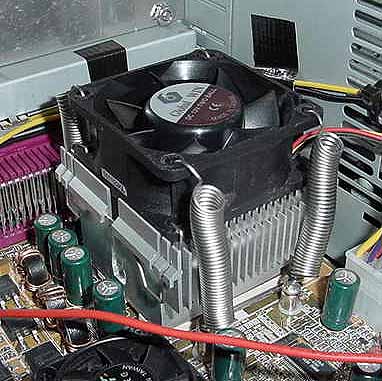 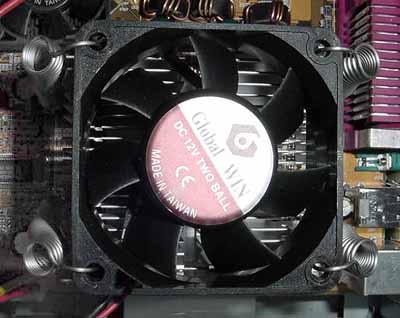 I would be remiss if I did not include the following admonishment:

There are plenty of Overclockers that are “Appliance Operators”. If something is not out of the box, plug and play, they are hopelessly lost. There’s no shame in that. They simply don’t do this kind of tinkering for a living or in pursuit of a hobby.

I am a natural “Walter Middy” kind of guy and actually enjoy the mechanical as well as the electronic challenge. If you don’t feel comfortable in being able to work through this, then by all means, don’t do it. I would hate to hear someone pooched the job and burned up his or her CPU. As Nevin, at Arctic Silver, so aptly put it, “Think it through.”

Please, if you have questions or feedback, help others benefit from them by posting them to the Cooling forum here, instead of sending me an email. I will answer any I get, either way.

Good Luck and above all, Have fun!

Got a shiny new P55/Lynfield setup but no way to cool it?