Our Overclockers.com [email protected] Team has been running member spotlights for quite some time – this is the 89th feature in our series of Folding Spotlights!

Dfonda: Thanks for the Interview , When did you join the Team?

D: If there was something recent that you did that you wanted your fellow team members to know about, what would it be?
M: I joined the Army. Going to BCT late Oct. Going to be infantry.

D: You do not have to give specifics (address), but what Part of the world do you live in, and if you don’t mind telling, what town?
M: I live in Lehi, UT. It used to be little town 20 miles south of Salt Lake City.

D: After starting, why do you continue to Fold?
M: Don’t know. I leave my computers on all the time, thought I’d put them to good use when I’m not using them. Now its somewhat of an unhealthy obsession.

D: What do you do for a living?
M: Almost anything, except prostitution(Smiling). I own my own small business. Pearson Computers. I do on site computer repair. I also work at Nelson Refining Systems as a blast furnace operator. (silver refiner.) This fall I’ll be working for the US Army.

D: Is there anything special you do in your spare time that you really enjoy?
M: I assume you mean something other than the fore mentioned list. I do enjoy the occasional chick flick featuring the talents of Matthew McConaughey…yeah totally kidding, he needs to get hit by a rusty bus. I enjoy learning more than anything.

D: Time to spill your guts. What are the stats of your main folding rig? Why is it your fave? What do you use the rig for?
M: i7 920 d0, 6 gigs 1600, 4 150gig raptor HHD in raid 0, gtx 285. Its my favorite because…well, because its got little blue lights on it, and a nice screen. I unfortunately don’t get to use it much, at least not since my wife discovered on line coupons. Saves us like 500 bucks a month, but shes on there more than I was when I played world of crapcraft. The computer I use most of the time is my q6600 with a couple unmatched 1 giggers, and a junk video card I baked back to life. still it folds (Grinning)

D: Do you have a Borg-Farm(Group of computers)? If so, how many computers, and what are they? (CPU, RAM)
M: I used to. Now I just have these two.

D: How do monitor your farm?
M: I don’t. Well… I check it every once in a while. But mostly I just let it run.

D: What are your future goals?  What do you most want to accomplish with your life?
M: PHD in physics. Medal of Honor. Not sure… just to make a difference. Don’t want to be forgotten the day after I die.

D: A few Pics of your Farm, Hobbies, even you! 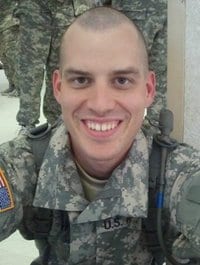 For those of you out there who are folding for a cure, there is great news coming from [email protected] and Nvidia. According to the article below Nvidia graphics cards are now CUDA enabled to help crunch the numbers faster. Based on the open-source OpenMMToolkit GPU projects using CUDA-enabled cores (core22) could now boost speeds by 15-30%.

Win an Intel i7 920 and Other Great Prizes!!! Please Join Overclockers.com and our [email protected] Team 32 for our 3rd Annual “March Madness” Contest!!!