I’m curious about something – overclocking is one part of my interests, but I think my other interests are consistent with what turns me on about PCs and overclocking. So I ask readers this question:

“In addition to overclocking, what other interests turn you on, occupying significant chunks of your leisure time?”

There are no right or wrong answers, just curious.

As it turns out, this is one very diverse and interesting audience! I thought I’d see some commonality among the responses and found just the opposite. The responses below give some idea of this diversity:

Guitar takes up a big chunk of my time now. The only relation I can see with overclocking is the confidence to mod pretty much anything, ie changing pickups, speakers, pots and valves for a more unique output.

Car and diesel truck performance. I have a small warehouse of parts at home, and the tools to use on them (including a forklift in the backyard – no kidding!) Attached is a picture of me in my ’98 Dually during a burnout contest at the Haye’s Mopar Meet in September ’06, Atlanta, GA. I didn’t win – I got beaten by a 60 year old woman in a Dodge van with a 440.

When I’m not tinkering with computers and data networks, I’m usually
doing something related to SCCA Solo II competitions (a.k.a.
“autocrossing”). I started it two years ago with my ’99 VW Passat and,
when that proved to be unreliable as a daily driver (let alone a weekend
racer), I convinced the wife to let me upgrade to an ’05 Mazda RX-8.
Races are typically two-day affairs in open sections of pavement (such
as a large parking lot or the former Chanute AFB in Rantoul, IL). Right
now, I’m examining ways to go faster.

My other pass-time is yelling at the radio when the political talking
heads are being stupid (i.e. all the time). This one is far less
expensive (about $100/year to my local public radio station) but also
far less satisfying.

In my leisure time, I brew beer. Microbrews are expensive, but this hobby allows me to brew beer of the same quality and style for about the price of natty light! I also roast my own coffee. This allows me to control the roast darkness, and it also lets me buy high-grade gourmet coffees for around $5/pound! All it requires is a coffee grinder and a second hand popcorn popper.

As an overclocker and computer/technogeek in general, I spend a lot of time in front of the computer, surprise! To stay in shape, I have two hobbies – one is mountainbiking, the steeper the better. Since I live in the northern part of Norway and I hate winters, I have another winter hobby and that is weightlifting. But I have to rate mountainbiking as my number one hobby – I’ve built my bike from scratch, even spoking my own wheels.

Aside from family which of course takes center stage, I have one other interest that occupies a significant amount of my time: Motorcycles.

I have been riding for almost 20 years now and will continue to ride until my health or some other outside influence won’t allow me to ride any more. Of course just as with computers and overclocking, I can’t leave anything alone. Every single bike I have owned has been modified in some form.

My latest ride mirrors my overclocking feats the most – get as much out of it as you can for your investment. Take it right to the bleeding edge and then back it down a couple notches so as not to ruin the enjoyment of the new found speed. The end result of this with my motorcycle is a turbocharged, street legal, daily driver that makes 480 HP but looks and drives like a stock bike. I love technology.

I
spend my time being a ham radio operator. There are a lot of digital
modes like PSK31 which require the use of a computer which is connected
to the radio via the sound port. These modes usually are very long
distance transmissions with very low power requirements in terms of
transmitter power.

Also I am working with the ARES (Amateur Radio
Emergency Service) and RACES (Radio Amateur Civil Emergency Service) to
assist disaster recovery after major events such as tornadoes,
blizzards, and the like. Using my background in networking I’ve been
working on building an OSPF routed WiFi Network that could be set up
after an emergency to enable communications between various relief
points in an affected area.


I overclock cars. I’ve ‘tuned’ the fuel and ignition maps for a large variety of makes and models of cars to produce more power and cope with adding things like larger fuel injectors, turbochargers, different manifolds, camshafts, and other things that drastically change the volumetric efficiency of an engine and how its computer will anticipate these changes.

Here’s a pic of my “other hobby.” The car is a ’92 Nissan 240SX with a Japanese SR20DET engine, different turbo, Subaru STi fuel injectors, 300ZX mass airflow sensor, 300ZX brakes, differential from a ’01 Japanese Silvia etc. It currently makes about 350 hp at the crank, and weighs about 2450-2500 lbs, so it’s a little faster than a new Corvette in a straightline, all running on fuel and ignition maps I developed for the stock ECU. The car is currently coming onto the front straight (banked oval part of the track), exiting turn 15 of Texas World Speedway. 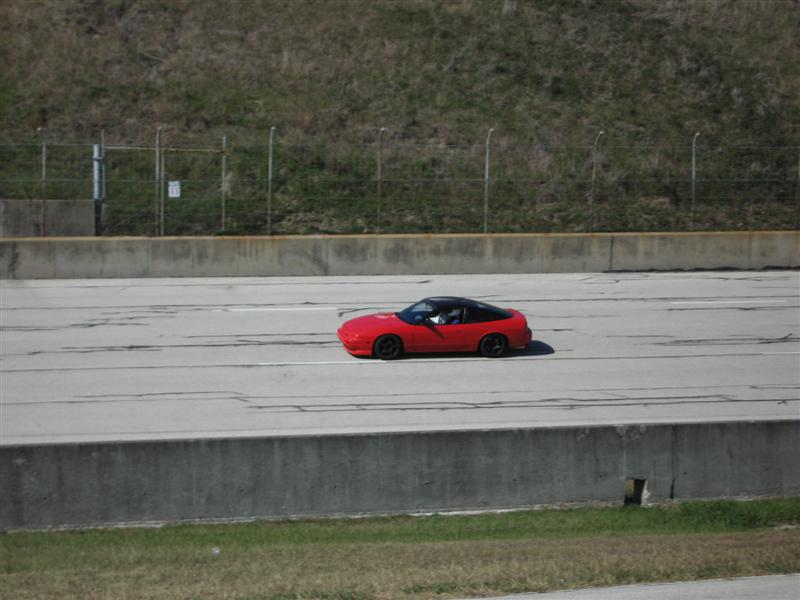 When not working on computers, I spend a fair chunk of the remaining time
(that is not working, eating or sleeping) working on and launching high
power rockets. I am a member of both the Tripoli Rocketry Association
(www.tripoli.org) and my local club, KLOUDBusters (www.kloudbusters.org).

I’m working on a rocket for my level 2 certification attempt –
simulations put the rocket (4″ diameter, 80″ long, 10l bs ready to fly) to
about 6500 feet on a J570 motor; that is about 285 lb of total thrust,
burning for a little over two seconds and reaching a max velocity of about
650 mph at motor burnout.


Reading esoteric books and practicing yoga and other forms of meditation, in hopes of evolving as a human being. After all, the ultimate overclocking experience would be to unlock the true human potential, not that different from unlocking pipes and higher frequencies in our PC hardware. I think it is pretty obvious to just about everybody that we humans are not all that we could be.


I am a member of Aircraft Owners and Pilots Association (AOPA) and own and fly a small single engine Cessna 172 that just turned 30 years old (the plane, not me). I am into building anything. I am currently building a large two car garage for my father in-law and am going to build a house next year. When that is done, I plan on building an experimental aircraft.

Skip One or Two

Got quite a bit of mail on this. Thanks to all those who responded! You basically told me one of two things: (Most of you) “I used my video card until it was awful at the game I was playing.

There’s an interesting article over at Tom’s Hardware. It demonstrates that nVidia’s 8-series cards deliver rather more increased firepower with a revved-up CPU system than other DX9 systems. I’ll also note that this site just put up an article which

Recently, one of the in-laws in my life called to tell me that her USB printer for her laptop had stopped working. One day, out of the blue, rather than print, it told her and kept telling her would tell