What you are about to read is the third part of my overclocking trilogy. 🙂 The first 2 parts can be found HERE.

After the last mods (mostly overclocking) my system was like this: 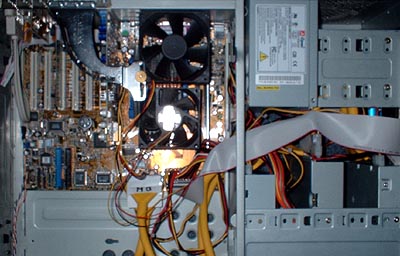 This system ran stable, but after about 5 months I decided to overclock it even more, add more advanced cooling and make a better case mod.

I ordered the next things:

Total Cost: about $200, including shipping, some tie-rips, tape and screws.

The extra RIMM is to increase performance, because my 256 MB was often 98% filled and would start lagging when I ran lots of other applications simultaneously with games such as Generals, 1503ad and Battlefield 1942, which all eat up well over 300 MB, if available.

I use my PC for several different purposes: When I am gaming, I want high frame rates and great details, while noise is no problem. When I am working for school, all I need is MS Word and some concentration, so a PC that sounds like a would-be 747 turboprop is not a good idea. Also, when I let my PC run at night, I want low noise, which should be no problem because Kazaa and FileZilla don’t require great performance, so almost silent cooling should be possible then.

First thing I did when the package arrived (all-in-one at www.eynstein.nl – they have great modding stuff) was to take my PC apart. PSU out, CD/DVD drives out, all cables disconnected and the panels removed.

Disconnecting the fans every time I needed silence got boring and I needed better cooling because I wanted to overclock well ahead of the 2.8 it was running. The Zalman fan controller seemed a good idea for that – it can control up to 6 fans which can be set from 6,5 to 12 volt with knobs at the front of the PC. This means, for the Enermax fans I purchased, ranging from almost silent to full cooling speed, so it perfectly suited my needs.

The installation of the fan controller is easy. All you need is a free 5,25″ bay and knowledge of how to connect some wires. The unit is powered by a standard molex connector and draws a maximum of (4 x 7, 2+2 x 8 =) 44,8 watts. Four cables for fan connections are included, so all you need to do is connect them. 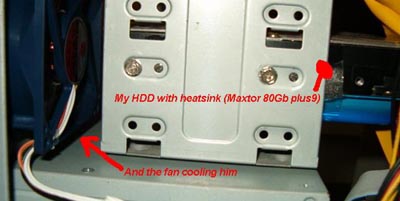 One of the old noisy parts was the PSU fan, so I took it out, as well as the fan grille, and replaced it with the last of the Enermax fans: 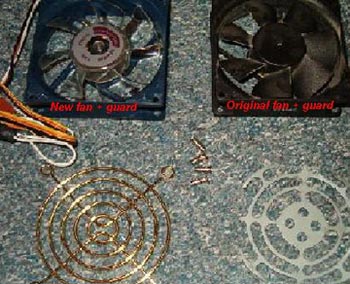 Taking apart your PSU voids its warranty, so think twice before you do so – I don’t recommend doing it! Leaving the cables connected and getting electrified isn’t a good idea either.

The replacement of the fan is easy. In this case, it was connected to the PSU PCB by just 2 wires, so I cut them and used tape to make sure they wouldn’t short out. The fan screws are the same size as normal and the fitting is exactly the same too. I placed the Enermax fan in and led the connection cable out on the other side so I would be able to connect the fan to the fan controller. I mounted the Enermax fan grille on the outside of the PSU: 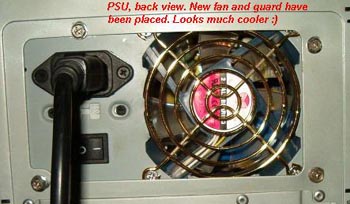 After I mounted all the fans and the fan controller, it was like this:

The right 2 channels are still free and can be used for anything requiring either 5 or 12 volts.

The cathode tubes are for LAN Parties. I made nice entries with my 2.0 @ 2.8, but a light was needed every time they wanted to look inside, and ever since I am thinking of adding a window sooner or later. I decided the tubes would be a good idea, and I just have the side panel open all time to be able to enjoy them – a window may come in later.

Connecting them was a bit of a trick. The tube control unit has a molex connection which is interrupted by an on/off switch. Those cables are very long, so I had to find a place to clean them up in. I used the holes in the front of the PC to put the wires in and secured the on/off switch in an already existing 2 cm hole in the front, which fit precisely.

The switch is only for emergency use – I leave it ON usually so the tubes turn on the system. The connections to the switch drop-out very fast, so I had to secure them using tape and some wire. The set includes double sided tape for mounting the stuff. One tube at the bottom, one on top and the switch + control unit in the middle front – it looks like this: 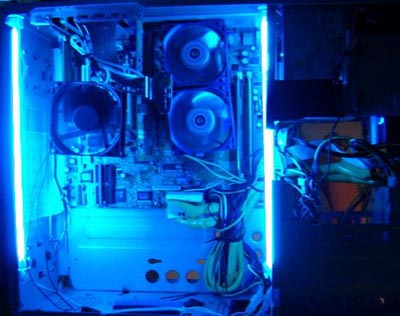 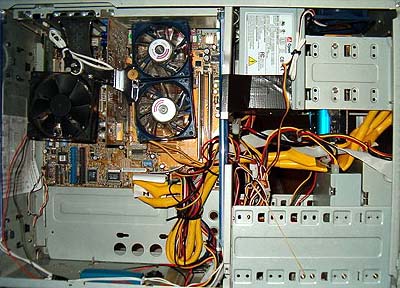 OK – now the modding is done. Let’s overclock this baby!

I downloaded a new BIOS version (1.005 update to 1.006) and flashed it using ASUSupdate, which flashes the BIOS while still in the Windows environment. This allowed me to set the core down to 1,65 volts. I rebooted and checked temps: Idle still 21 C, load 41 C.

Next overclock: 2.9 Ghz, 145 FSB. It’s the highest mode that supports a 4x memory multiplier – when going higher, it needs to be set to 3 to make the RAM run stable.
{mospagebreak}

Next – The Big Guess: 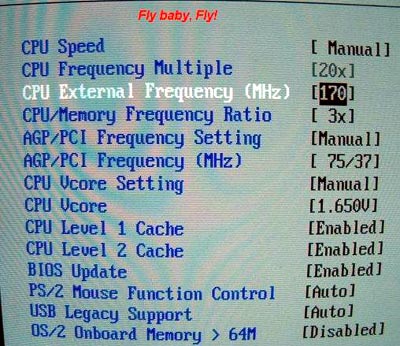 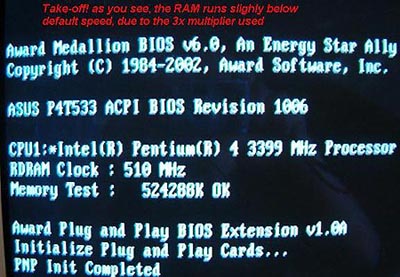 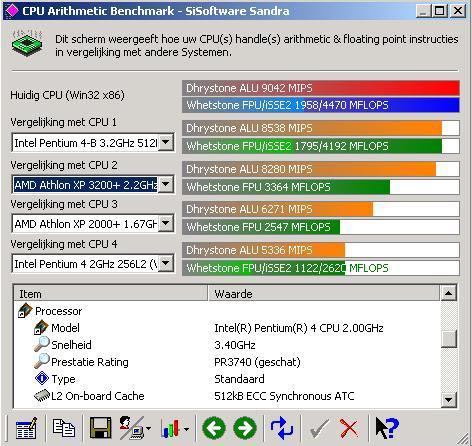 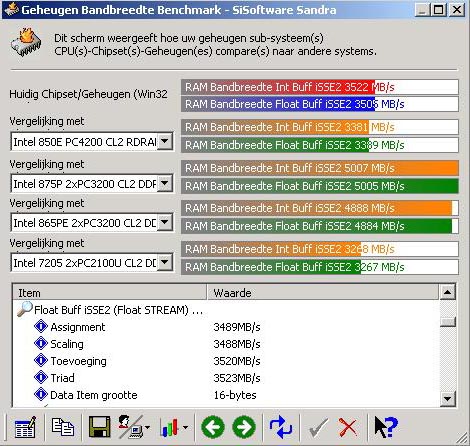 Cool! This baby outperforms a 3,2 HTT! 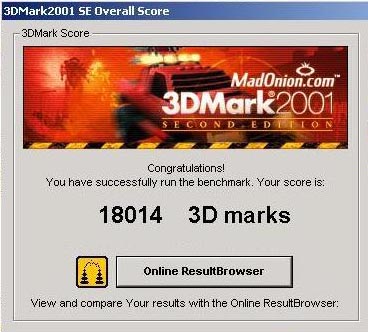 Pretty high, and my first score above 18.000 In this benchmark the CPU definitely has a big impact. 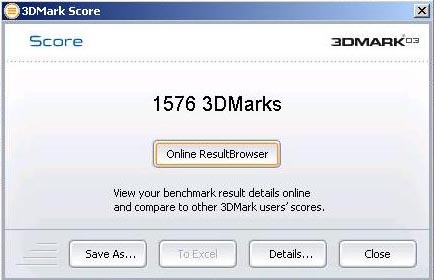 Pretty low. Other users with the same video card and much slower CPUs score about the same, so less CPU impact here. The CPU test scores I get are comparable to a 2.8 HTT.

Next: Prime95 – a good program to test the stability of your computer; also used to discover the ‘full load’ temp of a PC. 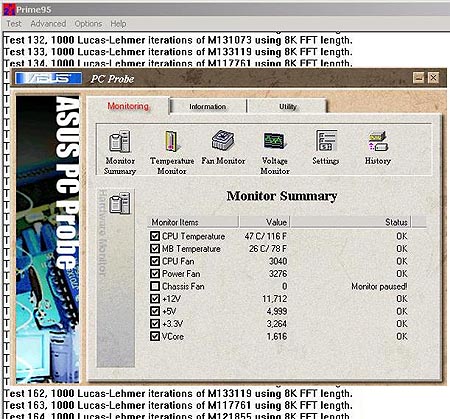 The idle temp is 28 C at full fan speed. When I lower that speed to the minimum, temp increases to 32 C, still good enough. 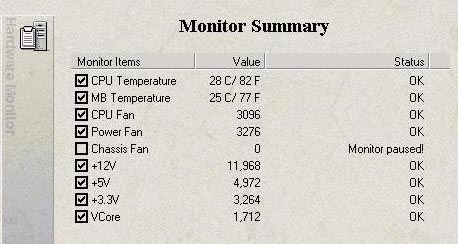 Well, that’s about it. At any clock speed higher then 3.4 and the system simply doesn’t boot. I think I finally found the true limitations of the P4 2.0 NW and the Intel 850E.

A 70% overclock is quite a bit, and if anyone got close or even over it, I really want to know what they used to do it and how they cooled it. Air cooling is sufficient for me, and my life (better: the life of the people I live with) became a bit easier thanks to Zalman 🙂

Thanks for reading this, I hope you learned something, or at least had fun. If you are thinking “Nice, lets try this myself”, I’m always available!

C’ya around! And remember: clock speeds are just rules…and rules exist because some dare to break them