As many of the non-US residents that browse thru these pages, I was drooling and crying on just how easy it is for these people to get extra performance from the cheapest CPUs by adding this and that cooler, waterblock, RadioShack gadget, etc.

But as you may know, those are unreachable luxuries for many non-US overclocking wannabes. I was determined to get one 600 MHz Duron to do at least 800, so I started to shop for heatsinks and coolers at several electronics component stores.

As the result of that shopping (and to make a veryyyyyyy loooooooooooong story short), Daniel Bufi, a good friend of mine, was able to get a bunch of Panasonic Panaflo 80mm fans. Working with several heatsinks for about a week or two and after getting request from five clients/friends to build similar machines, I went ahead and picked up five ASUS A7V motherboards, five 600 Mhz Durons (as going for anything higher here would result in being cheated with a fake 600 – more on that later) and started what I thought would be a serial overclocked Duron production line. 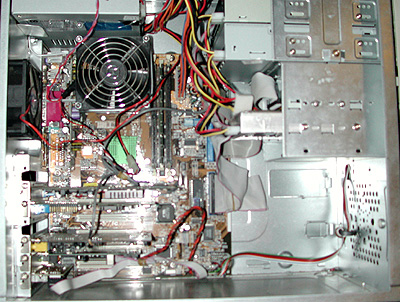 I was able to complete the first three machines in three days, all of them using an original CeleMine heatsink combined with a case mounted Panaflo (this moves huge quantities of air at low noise levels).

The thermal probe reported 44 C° at idle and 48 C° at full load with the case closed (as I´m writing this we have a really hot day in Argentina, the room temp being 28 C°); here is a screen shot of the ASUS probe 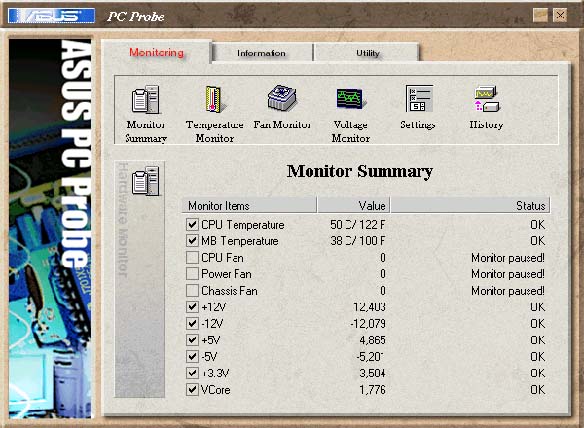 The other interesting stuff about my experiments was to get to overclock the fans!

Yes, by my friend making a 19 volt power supply, we were able to overclock the rotating speed of a small Toshiba cooler and get 2 to 3 degrees less than before, but this one was dropped for being both expensive and a less effective method than the PANAFLO/Celeron cooler combo. 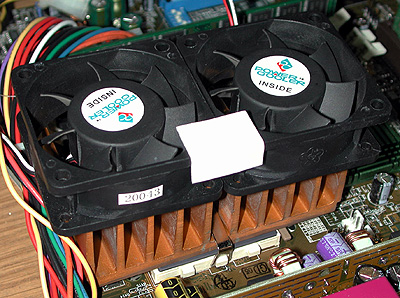 I´ve picked up this writing after successfully attaching a big, heavy, cheap heatsink with dual fans into a new machine and it seems to be doing fine at 1.85 v, a voltage that would make the others unstable (I blame this on the small size of the Celeron heatsink).

Note that in order for the heatsink to make good contact with the core, Daniel has modified it with a supplement so that the force is applied right at the core of the cpu, which lowered the temps 3 to 5 C°.

Well, at this point I guess the US overclockers may be jumping from their windows and grabbing their hair in panic, not understanding why all of this research for just average air cooler temps.

Well, it is just about the same reason that got me and all of you into overclocking the very first time – we want everything to be done NOW, or at least as fast as it humanly (or Proccessorly?) possible, even if money is no question (we would have bought 1 GHz processors if that was like that).

The time it takes to ship an Alpha, Global Win FOP, etc, would have killed my and my friends’ nerves, but as we spend roughly the same time investigating and playing with several heatsinks (even a home made one from Freddy, a guy whose father has access to the right machinery) we just did not feel time running.

Now after 4 happy friends/delivered customers, I´m in the process of getting one Alpha and see if it is $30 better than what we kindly have named FrankCoolerStein.

After about a month off trying and playing with heatsinks and coolers, there is no economically viable way yet to defeat the double fan / big heatsink solution (I´ve managed to get an Athlon 700 to 950 rock stable). The only downside may be the fact that it won’t fit into some motherboards – the Abit KT7 Raid by example, but as I can keep getting the excellent ASUS A7V, that is OK for me.

I see that the overclocking of cheap processors like this on an excellent motherboard is the best way to go. If you see how bad the P4 is doing, the poor speed limit of the P3 and the amazingly low price of the Duron, I guess the best advice is to make your system from the best motherboard possible and “rent” a cheap cpu.

After some time, I guess that 1.2 GHz Athlons will be discard items and sold for under $150 by the time the P4 has gained enough market share (if Intel manages to get the trick this time, which I see very difficult for them to) or the Palomino is available. Then you will have a system that not only outperforms an expensive P3 800 but also will last for some time.