I read your article on the ORB mounting, so I thought I would shoot this at ya. 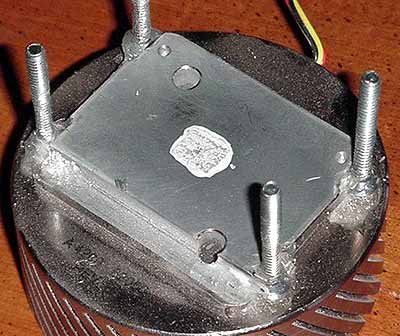 A buddy of mine purchased 10 of the Panaflo Orbs from a catalog (don’t remember the name) for 5 bucks a piece. I did a little milling on one side (to clear the socket’s raised part) with a band saw and epoxied 4 bolts to the base. 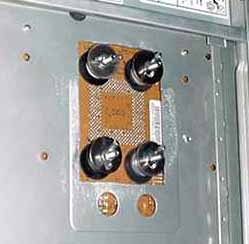 NOTE: I think using springs on these bolts is a great idea – easier to equalize pressure on the CPU. Joe.

On the backside of the mobo, I used a couple of rubber washers, a regular steel washer, a spring, a fender washer, and a wing nut on each bolt. It worked pretty well. I received similar results to yours with your copper plate. 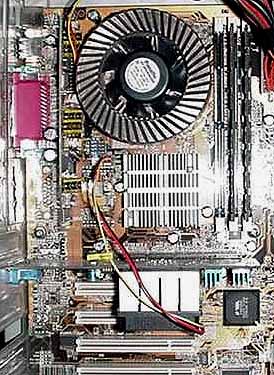 I now have my homemade waterblock on the Duron. With similar mobo temps, the CPU is running at 39C/102F degrees idle and 41C/106F at full load. I am able to run at 1010 Mhz now stable. Nothing more……

As soon as the resistors come in the mail, I will be jacking up the core voltage. I don’t have any pics of the waterblock at the moment, but I will try and get hold of a camera soon.

PS: This pic is also showing my Guillemot Geforce 2 MX. I took the original heatsink, cut it up, placed it on the ram, and added a $7 Duron heatsink from Multiwave. I have it overclocked to 205/205, running smooth. The KT133 chipset also has one on it. 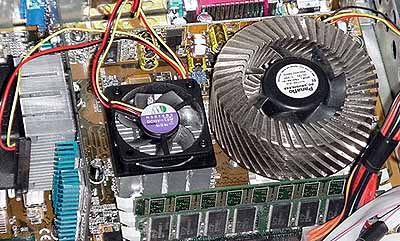 Another promising design but a flawed implementation. — Joe

SUMMARY: Cooling the Flip Chips is a real challenge for heatsink manufacturers – testing results so far show third party heatsinks to perform better than Intel’s retail unit, but not by much. The Global Win FKP32 performs nicely while the