Up next in our review carousel is another very fast M.2 PCIe NVMe-based SSD. With only Toshiba/OCZ and Samsung generally competing in this enthusiast space, it will be nice to see some more competition. To that end, our friends at Patriot have kindly sent over their 480 GB Hellfire M.2 SSD. The Hellfire promises to be pretty quick using its Phison PS5007-E7 controller shared by others in the market. Let’s dig in a bit and see what makes the Hellfire tick, and see how it performs in our testing.

Below is the Specifications table. We see it pairs the 8-Channel Phison PS5007-E7 controller and the Toshiba 15 nm MLC NAND for its storage and controller purposes. Patriot lists performance as 3000 MB/s sequential reads and 2400 MB/s sequential writes. Random 4K IOPS come in at 170K and 220K respectively.

The drive has a rating of two million hours MTBF to go along with 350 TBW (terabytes written) for the 480 GB drive. I am confident writes will not be an issue on this drive as it hasn’t been in the SSD world for a few generations now. With that, Patriot offers a 3-Year warranty for the drive. This is a bit behind others in the same segment, but still what most would consider enough.

Next up is the retail packaging. Here we see the Hellfire sold in blister pack type packaging. The Hellfire sits in the plastic surrounded by some cardboard. Looks like these are intended to hang on a shelf with the cut out on the cardboard. The packaging shows high level details on the front like the brand, model, size, and interface, while the back goes over a couple of features such as the advanced wear leveling and garbage collection.

Below we see a picture of the drive itself – I love these little M.2 drives! There isn’t terribly much to see, it is, for the most part, standard fare. Perhaps one of the more unique things is the drive uses both sides of the PCB whereas most I have seen use one side, particularly for this capacity. Just note for laptops this can be an issue as some cannot fit double sided M.2 sticks.

Zooming in on the drive, I took off the sticker on the front to expose all of the chips it uses. We see the Phison PS5007-E7 controller in the first picture, followed by the Toshiba 15 nm MLC NAND used, and the NANYA based DRAM buffer.

Below is a slideshow of the Patriot PCIe Toolbox. Like other SSD Toolboxes, you are able to capture information about the drive via SMART data (which wouldn’t work for me, for whatever reason… other sites it worked), Secure Erase the drive, as well as update the firmware. A basic package of tools. No issues outside of the SMART data not working.

On to the benchmarks! Our first stop is with CrystalDiskMark and its random reads and writes. For reads, we can see the high queue depth really lets this drive stretch its legs leading the pack by nearly 200 MB/s. With single queue depth (QD), it falls back behind the OCZ and Samsung, but still manages to be a bit ahead of the Intel drive. Single QD 4K results were right in line with the other drives while the QD32 results brought it to the front of the pack. A pretty solid showing here for sure.

Moving on to writes, We see solid performance in the sequential QD32 tests and regular sequential. Not the best, not the worst in the round up. 4K writes were the lowest of the group here but just barely. Crank up the QD and it again leads the pack.

AS SSD Reads showed similar results to above… a bit all over the place. In sequential reads the Hellfire leads the pack by a significant margin, while its 2nd in 4K. Yet when we go to the 4K-64Thrd results it’s trailing considerably behind the other drives. Perhaps the QD scaling stops and makes an about face somewhere?

Here, for whatever reason, things just don’t look great. the good news, for Patriot, is my results are anomalous. If you look at say, Anand’s results for this drive, they are showing sequential writes well over 1200 MB/s. I have tried everything I know of to get through this, even reinstalling the OS from scratch, but, I still received these results.

Nothing to see here outside of write access being incredibly slow again… makes sense with the results above. Reads were just fine matching the quickest we have tested.

The overall score is brutally low to the other drives and what it should be comparatively, mostly due to the write results I had. This would have boosted the overall score up considerably. I have linked some other results showing what this drive can really do in AS SSD from thessdreview.com website.

ATTO is doing its thing showing off the best case scenario with these drives. In this sequential, highly compressible benchmark, the Hellfire starts off fast, and leads throughout the testing by a pretty fair margin throughout.

Writes are showing the same thing with this drive maxing out at nearly 2400 MB/s. More important are the 4k values. Here, like in reads above, it was leaps and bounds faster.

Last up, Anvil Storage Utility. This application goes through several different tests giving one an idea of all around performance. Here again, our testing was way off compared to other sites that ran this benchmark. While I scored 5.6K, they scored 10.4K. Again, not sure what is going on with this drive and my system.

Patriot’s Hellfire has shown some real promise in performance, beating out some powerhouses in some tests, and falling in the middle of the pack in others. Only rarely was it the slowest of the bunch. I speak in terms of my results which match other reviews but also referencing other reviews which showed some benchmarks scoring way higher.

After talking with Patriot on the issue, they had us make sure write-back cache was enable on the drive for best performance. When that still didn’t help much in the testing, they said, “the OS keeps sending FUA commands in the background which affects the 4K writes”. They go on to say, AS-SSD and Anvil benchmarks simulate deeper QD (Queue Depths) will have this kind of issue, ATTO/CDM use QD1 so it doesn’t affect it”. That was right from Patriot, but yet still doesn’t explain why other sites are able to reach much higher speeds.

The Patriot Hellfire M.2 NVMe SSD carries your typical features found on M.2 PCIe 3.0 4x NVMe-based drives, but not much else. It does what it intends to do – be a very fast drive. Pricing comes in at ~$281 from newegg.com. This puts it well under the venerable Samsung 960 Pro, and a few dollars more than the currently on sale Toshiba/OCZ RD400 512 GB. Both drives have a capacity advantage, sometimes speed advantage, but definitely a warranty advantage over the Hellfire. Performance-wise, they seem to beat each other up depending on which test you look at. So the performance is certainly there.

Overall, the Patriot Hellfire showed up and played with the big boys in the market very well. Pricing is a lot less than those it trades blows with (unless there is a sale of course). If you are in need of something just as fast as these higher priced drives, be sure the Patriot Hellfire is on your list when shopping for an M.2 PCIe 3.0 4x NVMe based drive!

TEAMGROUP announced plans for a T-Force Cardea PCIe Gen5 SSD series for the third quarter of 2022. The new drive will hit the shelves with expected sequential reads and writes of 13,000 MB/s and 12,000 MB/s and up to 4 TB of storage capacity. The new T-Force Cardea will also incorporate NVMe 2.0 technology. Additionally, multiple cooling solutions will also be available. It’s still too early for TEAMGROUP to announce pricing so for now, we’ll have to wait. Below is what TEAMGROUP has to say about its future Cardea series drives.

Swinging by our friends at Patriot, they showed off some smoking fast RAM in the Venom, Elite, and Xtreme lineups with speeds up to DDR5-8000. You’ll find the fastest SKUs in the Xtreme lineup with capacities ranging from 16GB (2x8GB) up to 64GB (2x32GB), though we imagine the high-capacity kits will run slower speeds as well as RGB and non-RGB offerings. Pictured in the gallery are some benchmarks, including AIDA64.

Thanks again Joe. It seems that we'll be seeing more of these drives from everyone in that market, a good thing. I'd recommend even the slowest of these type drives to anyone with a need for speed. SSDs are great compared to spinners, but these things are simply awesome. I guess you'll be busy with all the product intro's for the next few years. ;)

I have two Hellfire SSD in RAID for couple of months now and they're working great. Drives are using standard Microsoft drivers so there are no issues with Windows installation and they're not heating up as much as Samsung SSD so don't really need additional cooling. Performance wise the Hellfire is better than Samsungs in average constant performance but a bit worse in peak bandwidth. That's what I can read from benchmarks.

I'm not sure why but some results in the review are lower than expected (especially Anvil's Storage Utilities). I had no issues on X99 Taichi motherboard.
Here are my results made on the 240GB Hellfire about half year ago ( 480GB supposed to be faster ): 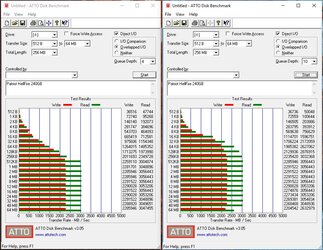 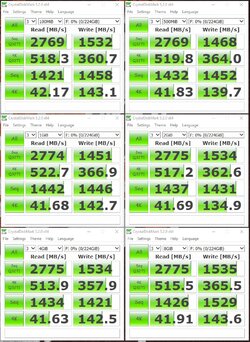 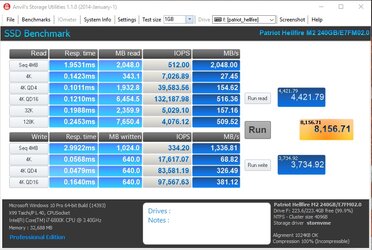 Right now both my SSD are working on ASUS APEX and I see no performance issues.

Great review Joe and kudo's to Patriot for joining the race. It's always good to have additional options.