After handling a half dozen AXIA T-Birds, I found one that would do 1550
aircooled w/ 2.0v on my modded Asus A7V133 (bare board on the bench in my
garage – on a cold night). Running a chip like that in a closed case was
another matter, so initially I wanted to get rid of it so it wouldn’t gnaw at me as it ran well below its potential. I refuse to put a Delta 38 anywhere near my case, and even getting this whole shebang quiet at 1450 was proving to be a hurdle. 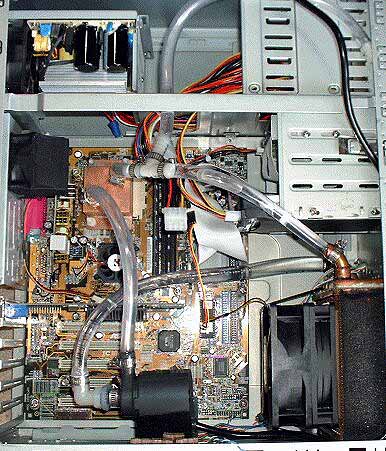 The obvious alternative was water cooling. I’ve been intrigued by it, but
this machine is the family rig, so I shied away. Alas, I couldn’t resist and ordered up some gear. Both vendors were having delays, and I am not a
patient man. I had a piece of 1/8″ copper stock, so I drew up a quick design for a block, went to a machinist and had him cut me the pieces I would need (cost $25). 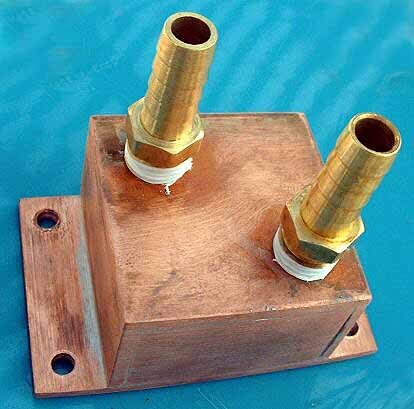 I came home, broke out the torch and solder and sweated the
thing together – quite a challenge. Inside are 4 – 1.5″x.5″ high fins that
run between the in- and outtakes. The block is 2″x2″x1″ and mounts with 4
nylon bolts and springs. 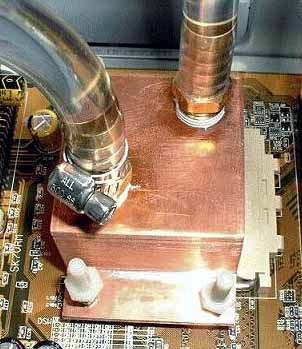 Compared to milled blocks there is a whole lot of
volume inside mine. 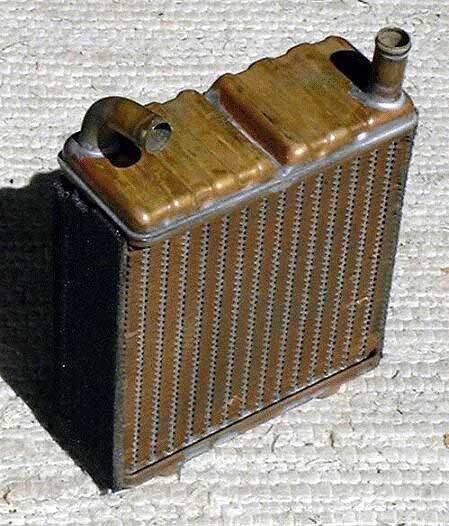 Next I needed a radiator: I went to an auto parts store and looked through a catalog at heater cores, made a short list of the smallest and went to the junk yard. I ended up with a ’78 Toyota pickup core that is 5.5″x5.5″x2″ (cost $25) – it is cooled by an 120mm 89cfm Panaflo.

On the pump front, I tried a Rio 400 powerhead, but the reservoir made from a marine junction box was too big and blocked every PCI slot. I went back to the pet store and settled on a Maxi-jet 1200 (cost $25) in-line pump. Both the heater core and pump needed some nozzle mods to make them work.

This is all crammed inside a fairly roomy mid-tower (Hydraulic – same case that Alien? uses) but it still needed a bunch of massaging to make everything fit right. Total cost with tubing and miscellaneous hardware was a bit under $100 – not much less than some complete kits, but I think this thing is much beefier than the entry level kits.

One small bummer is that nothing on the Asus VRM riser have heatsinks on them and running 2+ volts makes stuff BURNING hot on there, so cooling needed to be added.

Hope this helps people who want an alternate to kits.