One of the things I love about Computex is you get to see all manner of computer gear. As case temps increasingly rise due to elevated CPU, GPU and other heat sources, the resulting cooling challenge engenders traditional and not so traditional approaches to the problem.

Air conditioning the air coming into the case is one that’s been tried in a variety of ways, and I saw two examples of the show floor.

One approach is to cool incoming CPU air only – KM Korea took this route and uses a TEC to cool air to the CPU only. The power supply is divided into two parts – one for system power and one to cool incoming air: 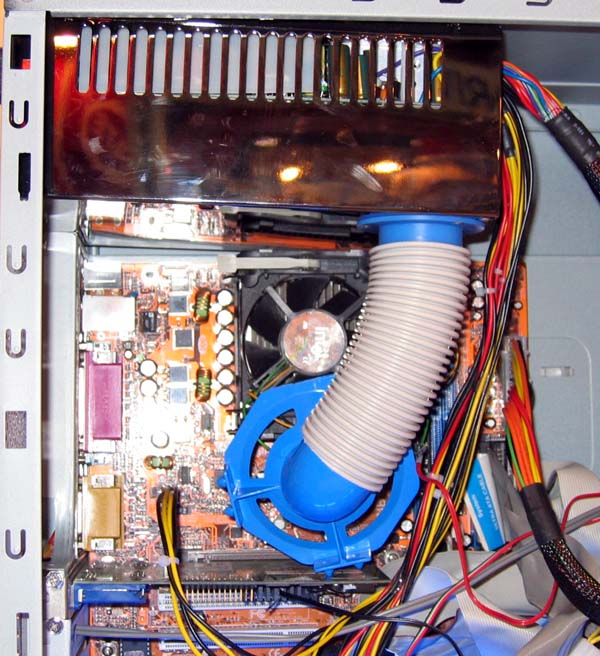 The duct directs cool air into the CPU fan directly: 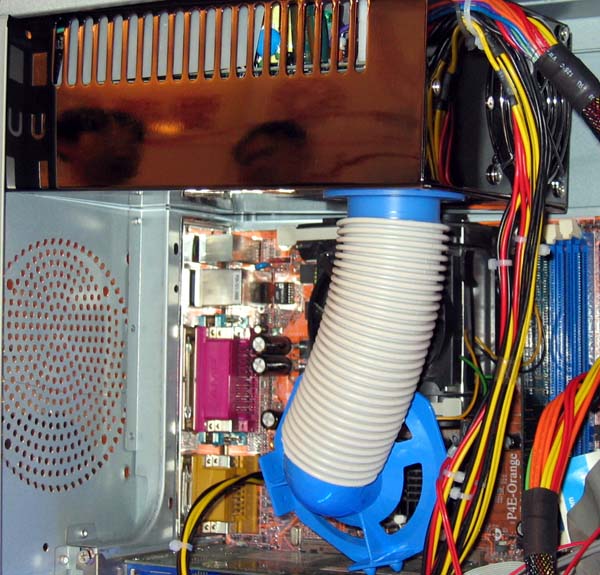 I have asked for a sample to test – an interesting idea.

Another approach is to cool all incoming air into the case – Sytrin has developed such an system – at the front bottom of their case sits a TEC air conditioner: 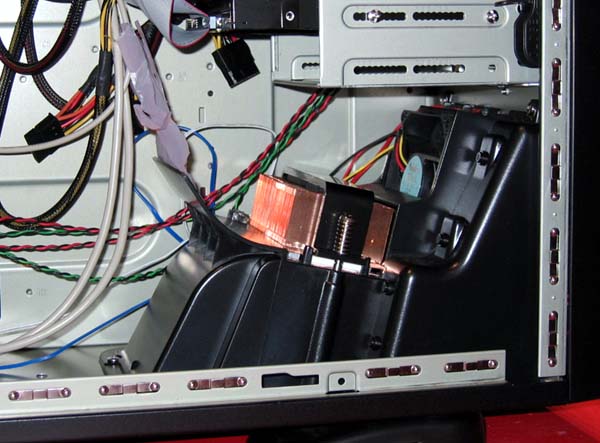 Incoming air is cooled by the copper fins seen above; hot air from cooling the TEC is exhausted through the bottom of the case. 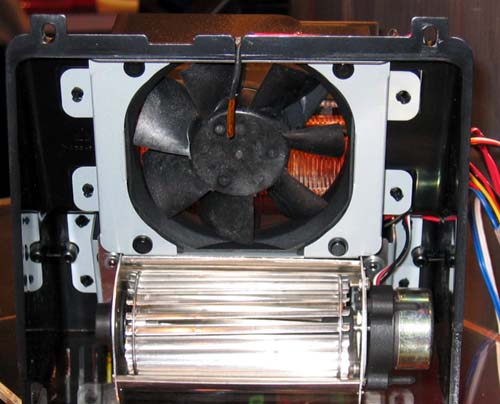 The cooling module is shown below: 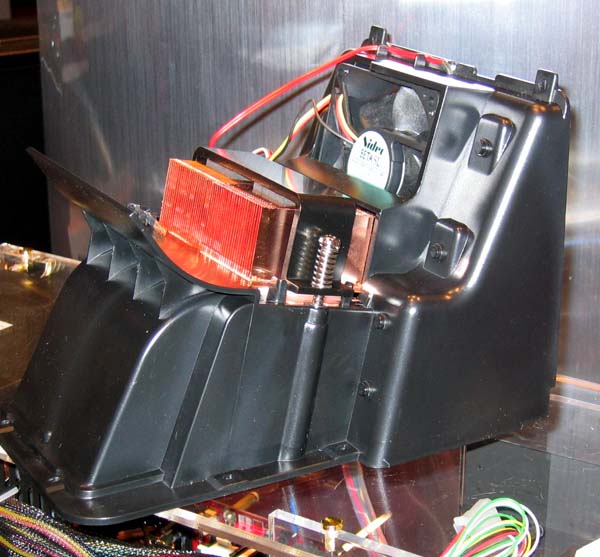 Another product fits into a CD ROM slot with the same idea – cool incoming air: 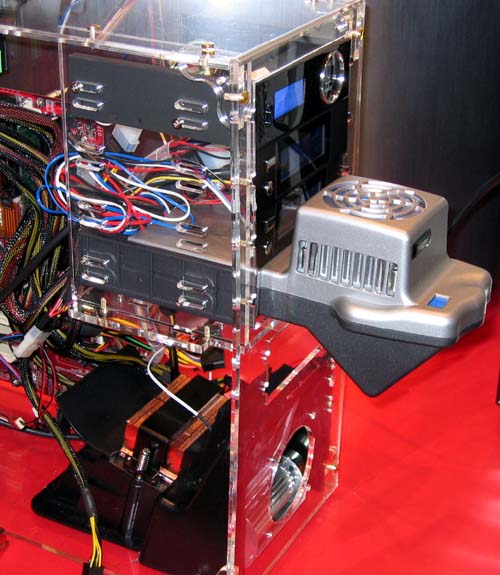 This could be used in any case, as it’s a stand-alone unit: 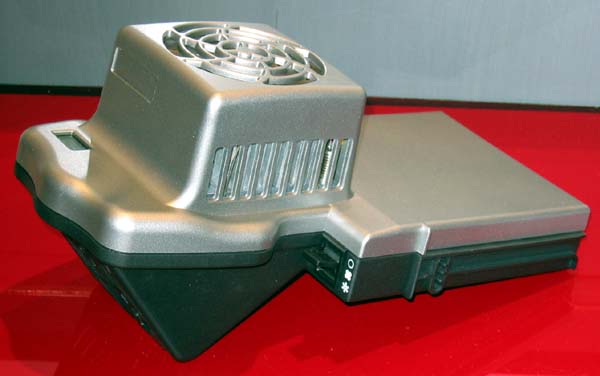 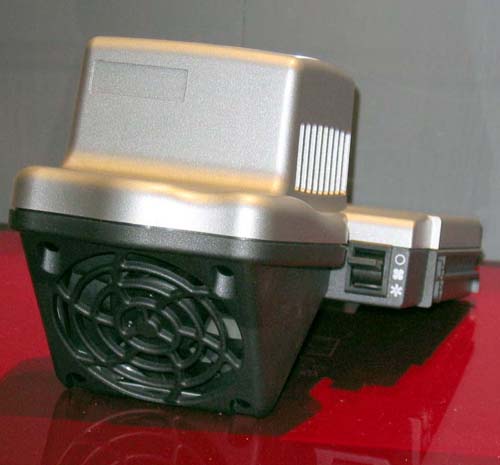 Without testing any of these units, I can’t tell you that it’s an effective approach. However, it would seem to me that spot cooling of the KM Korea type would be more cost effective than cooling the entire case. I would also be concerned about condensation, but both vendors assure me that it’s not a problem.

At a minimum, innovation is alive and well at Computex.

Can scantily-clad models sell hardware reviews? The website called The Naked Review thinks so. Other computer hardware websites have certainly had pictures of attractive young women abounding on their site, but this is the first one to have videos of

Anyisms and Anyists It’s a shame we have to have this holiday. No fault of Dr. King’s, of course. All he said was, “Negroes are people, too.” The shame comes from him having to do it, and that it was

I hooked up a AC duct to a case so cold air was flowing on top of the processor fan and got a 10 degrees drop in temp.

As Ed said, its not a terribly practical idea. Inefficient, expensive and bulky potentially. TEC's are especially inefficient, even as a direct-die solution. For a TEC to cool that volume of air (even in that duct) would draw a ridiculous amount of power and give you very little in return.

There won't be any condensation since the ambient temperature itself is reduced.

Every now and then, I like to put an airconditioner right next to my case for some suicide runs, and it usually gets me very little in terms of a real overclock; 50MHz at most. Same concept as the Vapochill Case Cooler. The difference here is that this uses a compressor for active heat removal, a lot more effecient and effective than a TEC. But also a lot bigger and pricier, and still inferior to pretty much anything direct-die.

yeah I'm waiting to see a review of the Vapochill micro..... that seems interesting also. Kinda sad it's be delayed until sometime this month. Hopefully soon.

The basis of this air cooling seems a little impractical, as it assumes you'll still be using air. This is marketed to the extreme overclock/high voltage/high temp types; these people don't use air. People are more likely to switch to water, which doesn't overload like a heatsink does with very high heat absorption. Air conditioning the radiator, maybe, but...

For overclocking, if your going to use an AC unit, mod it to be a chiller or DD.

Water cooling the cpu/gpu is the best bang-for-the-buck for oc'ing. Good air flow for the case should be ok for everything else. (unless you live in a mud hut on the equater :) )
imho

i went back to air oafter H2O for a while and regret it....silence is bliss...i don't see a whole lot of point in this "pc air conditioning"...but to each his own...

Seems like it would be way too inefficient to consider. If you were going to drop that much money into cooling your system, you might as well just go for a water or other setup.