With the global economy headed into depression, it seems to me there is a strong likelihood that  the churn of the installed PC base will change with new economic realities. Forecasts by outfits like Gartner Research and IDC made late last year are obsolete, with deteriorating economic conditions outpacing recent forecasts.

According to Gartner Research, there are something like 1.13 billion PCs in use around the world: 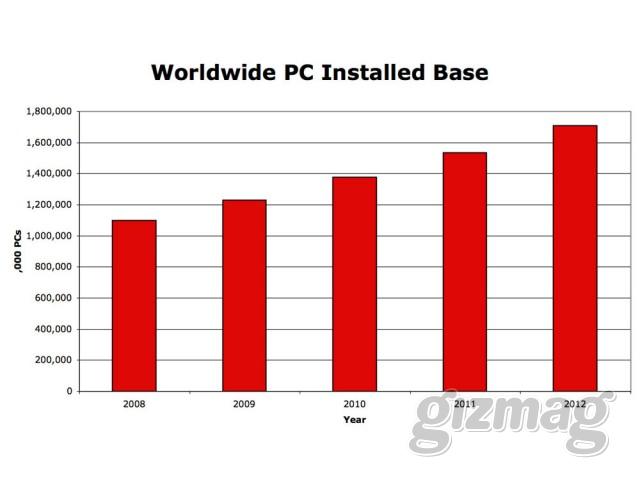 Gartner estimates that about 16% of the installed base (180 million PCs out of 1.13 billion) will be replaced during 2008. I doubt that 2009 will see the same replacement rate as harsh economics takes hold. While Gartner forecast unit sales to increase 5% from 297 million units in 2008 to 312 million units for 2009, the probability that unit sales will decline perhaps by as much as 10% – 15% is not all that far fetched. Note that without netbooks, unit sales would show a decrease.

This is without altering new new additions – any drop here will further deteriorate the outlook. It is not inconceivable to see PC unit shipments declining by double digits – a 15% decline is not unreasonable considering the hemorrhaging economic outlook, and that may turn out to be on the high side.

Netbooks – the only “bright spot” – really is not all that bright for PC manufacturers. Low cost is a big driver, and low cost means low margins in absolute terms.

Further, while netbooks will increase in power, the OS of choice is most likely one that will not require lots of horsepower – XP as long as it is available, emasculated Windows 7 from Microsoft and maybe more Linux that you might expect. Microsoft should benefit as upgrades from XP to Windows 7 take place at the enterprise level, but don’t expect this much before the end of 2009.

Talk me out of it, but I don’t see much to cheer about this year except that price pressures will benefit new PC purchases, IF you have the cash.

The Nag Gets Out of Rehab

Bottom Lines AMD stopped neglecting the Neglected Nag, and you can’t call revision B a Neglected Nag anymore. It looks like 2.4GHz (real) is reasonably doable. A processor capable of 2.4 GHz indicates a fairly level playing field for the

There’s been a great deal of concern that AMD’s chips won’t be too terribly fast in 2007, mostly because AMD has said so so far. Well, there’s some reason for optimism on this front. IBM will announce in February that