SUMMARY: A neat kit for the fan-junkie. 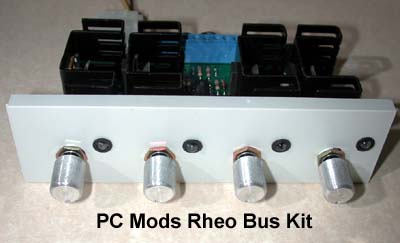 The good guys at Crazy PC were nice enough to send us over a neat kit to test out – PC Mods Rheo Bus Kit. For the electrically challenged, a rheostat is a variable resistor which allows you to vary the voltage continuously to whatever is attached to it. By varying the voltage to a fan, for example, you can vary its speed from just barely turning over to full speed.

For those of us that use lots of fans, a rheostat is one way to control noise and output – this enables you to crank up the airflow when you are pushing it, and turn it down when you don’t need the airflow. A rheostat is superior to a simple on-off switch as the fan (or whatever device is attached) can still deliver reduced airflow at lower noise. 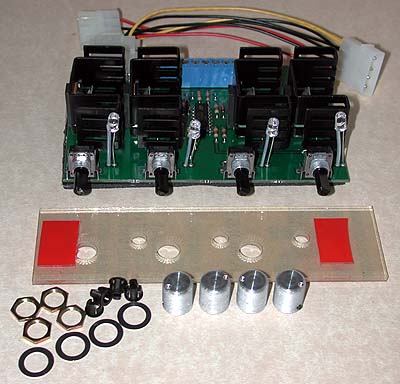 The kit comes as shown above with very clear instructions. The clear plastic piece with the 8 holes is a template that you use to drill holes in a 5.25″ slot cover to mount the Rheo Kit – four holes for the rheostat shaft, and four for the blue LEDs (intensity varies proportionately to voltage). Once you drill the holes out, mounting the Rheo Kit to the slot cover is a simple matter of bending the LEDs to slip into their respective holes and using the retaining nuts to affix it to the slot cover.

The four big black things are heatsinks for the rheostats; they do heat up, so expect to see some additional case heat. Plan to mount the Rheo Kit in the topmost slot – a drive over the Rheo will be hotter due to the heat radiating from the heatsinks.

The base of the PCB is covered with an adhesive rubber pad which avoids any potential problem with the board shorting out on exposed metal – a nice and necessary touch. 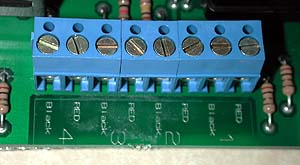 At the rear of the PCB is a bus with four clearly labeled connector pairs. Each rheostat is rated to carry 17 watts, so you can safely load 68 watts onto the Rheo. You can mount more than one device on a connector pair, but each device so mounted will vary when you rotate the control knob (they rotate about 300 degrees).

Note also that the connector block uses bare wire inputs – you have to cut off any fan connectors and hard wire into the Rheo Kit. You’ll also have to run wires through the case, so expect to do some soldering and figure wire runs for your case.

The Rheo is powered through a four pin, 12 volt, hard drive connector. If you plan to use all 72 watts worth of the Rheo, make sure your power supply can deliver the load required.

As I looked at the Rheo, I thought about how I would test it. One thing I did was to test its voltage range.

I placed a multimeter on a connector pair, placed a fan to load it and then recorded voltages from low to high. The lowest voltage was about 5 volts, the highest 11.5. I tested the voltage from the four pin connector – 12 volts. The rheostats will knock down voltage a bit.

I wanted to see how hot the rheostats would get under load, so I ganged all four connectors together and attached a 70 watt peltier to them – DO NOT DO THIS! OK for a test, but definitely not recommended usage.

I cooled the TEC with watercooling and ran it at the lowest and highest voltage settings. I placed a thermocouple on one of the rheostats to monitor temps under load. Temps ranged from 36 C to 42 C, so expect some additional case heat with the RHEO installed – the more load, the more heat you will generate.

PC Mods Rheo Bus Kit capably does what it’s designed for – vary voltage to 12 volt devices. It appears well made and looks attractive mounted to a slot cover. However, 72 watts is a LOT of fans – a middling 120 mm fan will draw something like 7 watts, so unless you are controlling other 12 volt devices, if you need the RHEO to control fans, what you really need is water cooling.

However, I do see a real neat application for the Rheo:

If you want to add TECs to your Northbridge chipset, GPU and maybe the clock generator chip, the RHEO is a nifty way to dial in just the right amount of voltage to some 17 watt TECs to keep them from frosting over. Couple the Rheo with something like the Digital Doc 5 (review coming), and you have a means to monitor and control temps on these key components. You might spend more time twirling dials, but it will look impressive!

The PC Mods Rheo Bus Kit is available from Crazy PC – thanks for sending it over for us to test out.

I’m a case junkie: many brands, many models. Ed from Koolcases sent me the Nobelese for a look. The Nobelese is a mid-tower case with an impressive-looking front bezel: The case has four 5.25, five hidden 3.5 and two exposed

I wrote the initial Athlon article after one of you sent me a statement from AMD with some ambiguous language. Lawyers love ambiguity, and I was afraid some overzealous legal beagle could read that and get the idea that it