Humphrey from PCNut said he was sending me an Athlon system to review, I never dreamed it would be as awesome a performer as it is! Read on…

I’m always impressed with the build quality and attention to detail that comes out of the PCNut Shop. Every wire and cable is neatly wire tied as not to impede airflow. The Floppy and CD-Rom cables have been cut and wrapped to make them as small as possible.

The “Nutcase JR” is an awesome case in my opinion. Lots of room to work and very easy access by removing one screw, sliding the top off and lifting the sides up and off. It has 4 5 ¼ drive bays and 2 exposed and 1 hidden 3 ½ bay. There is an 80mm fan in the front of the case and also a space for another 80mm in the back behind the processor. 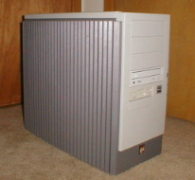 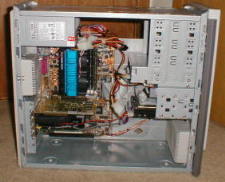 After plugging in the system and hitting the power switch, I was totally amazed when I had a full Windows 98 desktop in less than 20 seconds! At this point, I knew this was going to be one awesome performer!

I couldn’t wait to run some Benchmarks on this system. First one I did was Quake II. All Timedemos were ran at 16 Bit color, here are the results:

(I re-ran Crusher many times and came out with the same results. Seems the demo was maxed out)

Next I ran Quake 3 Test. I used the "Custom" setting and 16 Bit color.

Some notable ZD Winbench scores are:

Wintune Scores: (These have been entered in the Online Database)

*All benchmarks were run with the GeForce card at 120 Core and 166 Memory and Nvidia Detonator 3.53 drivers (Not the Athlon Version).

Incredible! That’s about all I can say. Even with a "Normal" Crusher system at 750 Mhz, there won’t be much difference. Stability was awesome. I had none of the problems that have been reported with the GeForce cards and Athlon systems. Seems Leadtek did their homework and released a GeForce that will run with the Athlon processor. This system ran Quake II and Quake 3 looped for 12 hrs each and ran Prime 95 for 2 days straight. Even though the power supply was not on the AMD approved list, it proved to be more than adequate for this highly overclocked processor with the power hungry GeForce.

Heat from the processor was not a major problem even running at 1.95 core voltage. The “Custom” heatsink did its job well and even fits on the K7M with dual 60x25mm Fans! 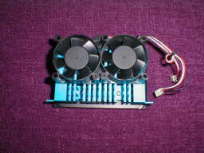 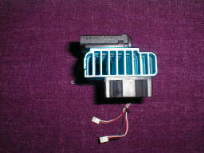 I did have one minor problem with the system, which I attribute to the way over spec core voltage. When powering up the system, you would get an annoying “siren” sound from the PC Speaker. Many others have reported this with the K7M board and the fix is to just turn off ALL the system monitoring in the Bios and use Motherboard Monitor to keep track of the system. Hopefully, a bios update will cure this minor annoyance.

I would definitely recommend this system to anyone who wants to get into an Athlon system now. The price is right and the performance is awesome! This is definitely an Intel Killer!

Many Thanks to Humphrey from PCNut for sending this system my way. It has definatly been a pleasure!

Update 11/25/99: A reader kindly pointed out to me that the power supply in the Nutcase Jr. is definitely on the AMD Approved list under Superpower SH250ATX. Guess that’s why it worked so well!

This review and comments are just my personal observations and
opinion. As with any products and services, please research throughly
before making any purchases. The reviewer and overclockers.com shall not
and will not be held liable for any damages cause by products reviewed in
this article.

Capacitor Theory Pops It doesn’t look like having capacitors arranged in 3.06 style makes any real difference in performance, folks. I’ve seen enough reports from people who have a 3.06GHz arrangement but aren’t reaching 3.06 to conclude that this is

Spitting on the Cross

The word “innovate” is becoming one of the most abused words in the English language. It started with Microsoft during its lawsuit. No, they weren’t doing bad things to monopolize the market; they were innovating. With such a dubious parentage,

Yes, Virginia, there is such a thing as 65nm Pentium IVs, though they’ve been noticed mostly by their near-total absence so far. A web search shows a handful of places where you can order them, though the sites generally indicate