UPDATE 1/17/00: Toby at BxBoards has a neat formula to size peltiers:

where heat load = CPU’s heat output in watts, max cooling power = Maximum peltier rating in watts and max temp = Peltier’s maximum temperature rating, in degrees C. So if your TEC’s maximum ratings are 60W and 68C then loading it with 40 W will give you about (1 – 40/60)*68 = 22.7C temp. difference.

SUMMARY: The more cooling you want from a peltier, the larger the difference between the amount of heat your CPU generates and the rated cooling power of the peltier. However, more powerful peltiers require substantially more cooling – air cooling can only get you so far and water cooling is the only sure route to super-cooling. For max cooling, be prepared to build you own rather than buy.

For a thorough theoretical understanding of peltiers, use the links listed below. The following explanation covers the basics and is somewhat simplified – it not intended to be an exhaustive nor so rigorous an explanation as to be unreadable. 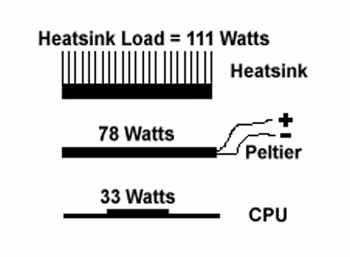 OK, we have to get into some math to understand why some peltiers work well and some are downright dangerous to put into your system. As the diagram shows, the CPU and peltier generate a combined heat load, measured in watts, of 111 watts. Qc is the CPU’s heat load under whatever load you specify – in this case a C366 running at 550 MHz. The peltier rating is given by the manufacturer and consists of 4 factors – Qmax, Vmax, Imax and Tmax.

Qmax is the maximum heat load the peltier can transfer from the cold side to the hot side assuming it is running 100% efficient. Vmax is the most efficient voltage, Imax the most efficient current (amps) and delta Tmax (dT) its most efficient temperature difference between the hot side and cold side, under no load. Each peltier model has its own rating and is listed by peltier manufacturers. Let’s assume we have a peltier which has the capability to move 50 watts of heat from the cold side to the hot side. This requires 78 watts of power @ 14 volts, 5.6 amps and 65C dT (i.e. it can maintain a 65C temperature difference between the hot and cold sides if there is no load on the cold side).

We can represent these relationships as follows:

Th, heatsink temperature, is one of the most critical element controlling the cooling performance of a peltier system. Let’s assume the case temperature is 25C, Pin is 67 watts (NOTE: the peltier is rated at 78 watts at 14 volts – at 12 volts, it is 67 watts (Amps x Volts)), Qc is 33 watts and the heatsink’s efficiency is 0.5 C/W. Substituting all terms into the Th equation, we get:

This means under the conditions outlined above, the heatsink’s temperature will be 75C (167F) – pretty damn hot. It gets this hot because it does not have the ability to get rid of the total heat load generated (the CPU AND the peltier) as well as we might like. This is critical because all peltiers have “Performance Curves” that indicate what the expected cold side temp will be under different heatsink temperatures, voltages and amps input. Reading these values off the performance curves then gives you the lowest cold side temperature achievable within our system’s parameters.

The “Performance Curve” for one particular model peltier is shown below. The three critical factors to use in understanding what this particular peltier can do for you are Heatsink Temperature (Th), Voltage (Vmax) and Heat Pumped (watts). Assuming the system can supply 12 volts at 2.7 amps (32 watts to the peltier), Th of 65C for a heat load of 15 watts, then this particular peltier will give you a cold side temp of 20C (65C – 45C = 20C).

Basically there’s no such thing as a free lunch – if you want to maximize CPU cooling, you have to use the biggest peltier you can find. The bigger the peltier, the more total watts you have to cool. The more you need to cool, the more heat is dumped into your system raising its ambient temperature. Higher ambient temp leads to more heat load leads to less cooling, and if the heatsink can’t take the load, it gets even hotter – so the cycle begins.

If you want max CPU cooling with a peltier, forget air-cooled solutions – it is virtually impossible to build considering the heat loads generated. Water-cooling is the answer, and dumping heat outside the case is a better solution than closed loop systems residing inside the case. It’s simple – water is a lot denser than air and hence considerably more efficient at absorbing heat than air.

Even if you find a commercial peltier that is rated at double the CPU’s heat load, if it is mounted on a crap heatsink, it will not give you the performance you would expect simply based on the peltier’s rated wattage. Therefor the other factor which you normally do not find in commercial peltier heatsink ratings is heatsink efficiency (C/W). For rough sizing, use 0.5 C/W. If you know C/W and the peltier’s rated watts, you can plug numbers into the equation to at least get some idea of what to expect, assuming you can maintain certain ambient temps and assuming something about the peltier’s “Performance Curve” under the stated conditions.

So what’s an overclocker to do? Do not expect too much from commercial air-cooled peltiers. The cooling task requires balancing a host of factors within an economic budget, and typically the tradeoffs compromise cooling performance. We have not discussed the condensation issue – it is a real challenge and is why you will not see too many super-cooling “off-the-shelf” units on the market.

If you want super-cooling (CPU temps of 0C or less under load) for max overclocking, expect to build you own water-cooled peltier system. It is cheaper than anything you can buy, you will understand it better and you can customize it to your needs. You must do your homework if you want to pull this off, and the links below will get you started. Good Luck!

Many thanks to Vlad for for his keen eyesight and insight.

Heat is the enemy. It really is that simple – computer chips degrade with heat and the more heat, the more likely you will experience performance problems. One of the most critical components in your system is the CPU cooler.