I have a bunch of cooling equipment waiting for a GeForce 3 Ultra and Palamino, but my science teacher, who sees me working with all this stuff in my research class, asks me to do Science Fair project. 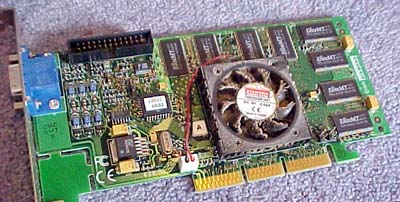 OK, why not? So I rig up 172w, 84w, Danger Den peltier stack, very chilly. I slap it on my Viper 770 ultra (tnt2u) hoping to take it to astronomical core speeds: I DIDNT GET 1 MORE DAMN MEGAHERTZ!

This is pissing me off! What the hell am I supposed to present at the Science Fair? Tell them I froze the hell out of it, all for nothing? The whole point is supposed to be I increased CMOS capacity by lowering temperature.

So here is some of what I did to the unappreciative tnt2:

I took off the old heatsink with obvious difficulty – should have taken this as a bad omen.

I made insulation blocks from polystyrene foam: 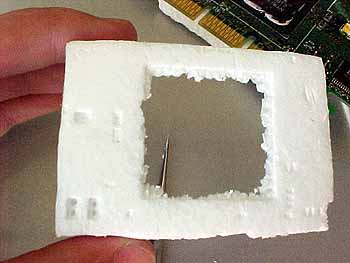 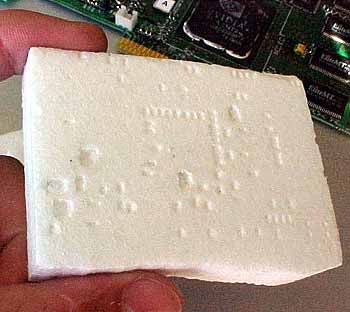 This took FOREVER to get each little resister in there, but now it fits like a glove. I know most of you prefer neoprene, but i’m very happy with how this came out; I’m thinking of using it on my real system, all this is just sort of a half-ass freeze the tnt2 jobber.

I test out/play with the peltier stack and it runs like a champ: 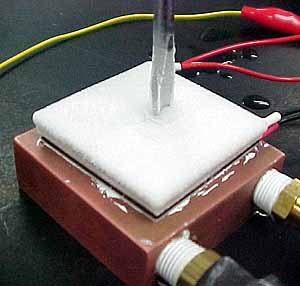 I have a freeze-burn mark on my tongue to prove it (stupid idea, but it was a fun demonstration). 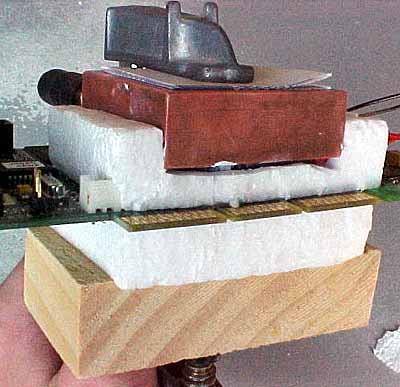 – it looks a little iffy in that pic, but I cleaned it up a bit – it really is a nice insulation jo, I must say.

So I test out the vid running with the peltiers off; goes to 176 MHz. I flip on the pelts, wont even do 178. I have the memory down to 150 after realizing that it really wouldn’t do higher than 176 or 177. I take off the clamp, the back insulation and flip on the pelt (with everything off of course).

Sure enough, the back of the card is nice and chilly after a few seconds. Now I know this is not the cleanest pelt/insulation job – it was very halfass. However, I don’t care if it’s 10C higher than it would be if I did a real job of it, it’s just for the Science Fair. I only used Radio Shack paste, no lapping and no alcohol sanitizing (I’m sure a few unlucky tongue cells are still on there).

So whats wrong? Maybe I was a little overzealous thinking I’d get to 230 – lots of people say cooling vid chips doesn’t do anything, but I know for a fact the chip is at a MAXIMUM of -40C, and I didn’t.

When you look at video cards, look at the rated speed of the memory on it. – Ed