I’ve always been into hardware ever since I did my first upgrade; going from a Cyrix MII300 up to a K6-2 450 MHz was fantastic – I doubled the speed of my machine and it only cost £45! As a result of that experience (and partly because I’m skint), I’ve always gone for the best bang for buck and never spent more than £100 on a single bit of hardware (a beloved and now deceased Voodoo Banshee video card).

A few months after the K6 upgrade my motherboard bit the dust, so I went to a local shop and spent £200 on a SoA mobo, a Duron 700 MHz chip, 128 MB SDRAM and a few other bits. I got it home, put it together, booted and wow! What a difference! Of course, I soon got used to the speed and I wanted (read needed) more.

I’d read about this before buying my SoA kit, so I was really disappointed that the Jetway663AS Pro motherboard I’d bought had very little overclocking potential, apart from adjustable Vcore and FSB. The generic SDRAM limited me to 7×110 MHz – not too good, eh? 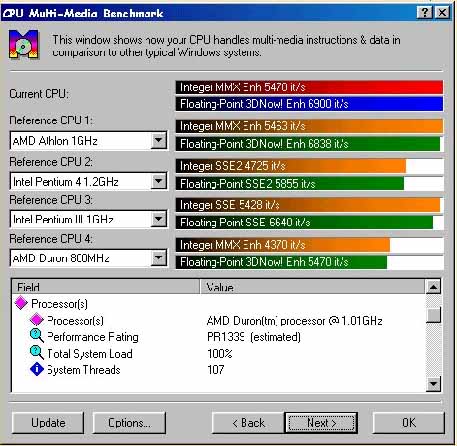 I didn’t give up, and to cut a long story short, I cut some bridges with a Swiss Army Knife, pencilled across others and ended up with a multiplier of 9.5 to give a whopping 950 MHz! I was well pleased with that, but I continued slowly, V-modding the board to get 1.91v. Finally, the magic 1 GHz mark was surpassed (see above image).

Shame it wouldn’t run at that speed for long; my case was cooking. Enter ghetto mods. A few Evercools, some AS2 and a lot of hack sawing my case later, I had her stable at 980 MHz on 1.85v at reasonable temps. 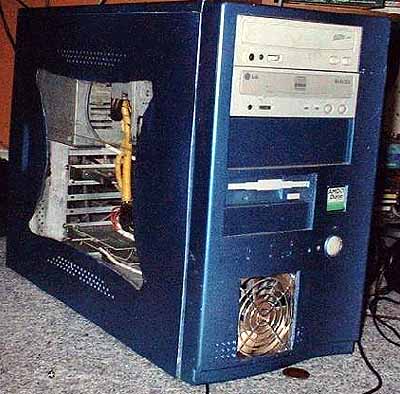 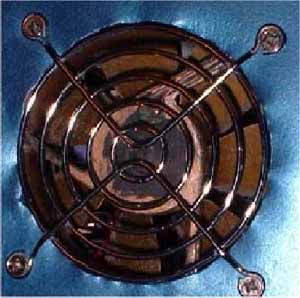 One of two Chimney Blowholes
Ghetto

I’d achieved a stable, well performing system for a fraction of the cost of a retail system of comparable performance and I was happy. Well, until I started longing for a water-cooling setup, I was anyway.

The problem with this was I couldn’t afford it. Not one to give up, I made a waterblock myself from some 7/8″ tubing that I had found in the loft. I planned to nick the pump from my parent’s garden pond.

After a few weeks I’d come up with this: 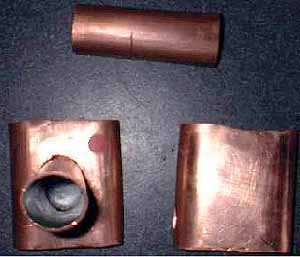 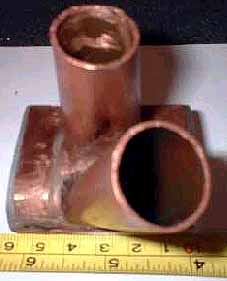 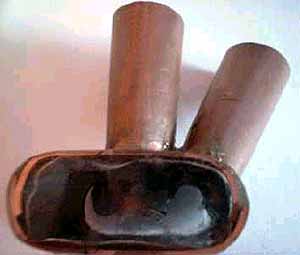 It looks a bit wonky but it’s capable of passively cooling my Duron for a few seconds, so it should work well enough. It’s glued together with epoxy, by the way. Now, this is the point where it gets expensive:

The waterblock itself cost about £4, including the epoxy and materials, which is good; however, I now need some 7/8″ flexible tubing, a bong or a radiator, distilled water and also some marine epoxy, as the standard stuff I’ve used will apparently degrade if it’s permanently submerged in water. I’ll also need a new pump, as the one in the pond is knackered.

Making your own waterblock is an achievement; doing something individual feels great but, as I’ve tried to explain, there’s only so much of a setup that you can make yourself, and non-standard designs often have a few teething problems. The main problem with my waterblock is the 7/8″ fittings, which are far from standard.

However, I’m not one for giving up. I’ll buy the tubing, a new pump, and the wet stuff as soon as I can, but there’s no way I’m paying for a rad or a bong – I’ve already got something I’m calling ‘The Bottle” in the pipeline (ahem).

Ghetto can be done at a much lower cost than a retail kit, but only if you persevere, look at each problem separately and realise that a homemade set-up will take time to implement if cost is a major issue. But you never know – it might be worth it in the end 🙂

The following reader Tips can get your AMD (or any CPU) substantially cooler with very little effort and expense; remember that adding a silver or copper base necessitates adjustment to the heatsink clip: Article from Chron USA: I’ve seen this

My Canadian friends have asked me about this system available in Canada, and someone sent me a sample to test out. SUMMARY: Underpowered, Undersized, Underperforming – Underwhelming. It is not pleasant to write a review like this; the folks who