The title says it all. — Ed 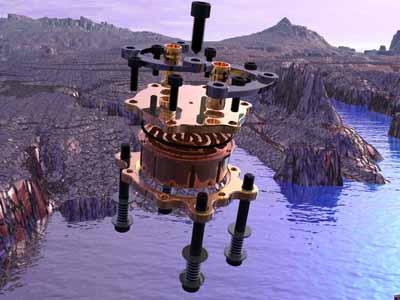 A 3D rendered image that I created from the CAD assembly.

I’ve finally decided to submit some pictures and information about my water-block. I’ve been visiting your site for some time now, and I haven’t been too impressed with some of the water-block designs out there.

I made my water-block about a year ago, and was using it successfully for most of that time since. I was using a submersible outdoor fountain pump, which doesn’t have much power. It worked adequately, even though the flow was barely more than a trickle.

My CPU stayed steady at about 36C. It is an Athlon 950 on an A7V MB and I was running it at 1196 (11.5 X 104). I made one mistake though – my choice of coolant could have been better. I used water with some added bleach to try and control the critters, however this didn’t agree with the seals on the cheap pump.

I recently retired the pump as it couldn’t sustain an adequate flow. Since I had the unit out of my PC, I decided to get some photos of it.

First off, here’s a picture of the copper base: 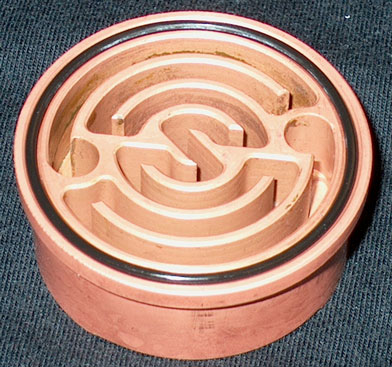 I would have preferred a different design, but I was limited by the material I had available to me at work. We don’t usually have much copper around, and all I could find is round bar stock, so I had to come up with a design around that.

To maximize the little area I had to work with for the water channels, I had to create a ring with tapped holes so that I could screw down the lid. If I had put tapped holes in the copper slug, there would be little room for the channel and the O-ring groove.

Here’s a picture of the whole works disassembled – I used brass primarily for aesthetics: 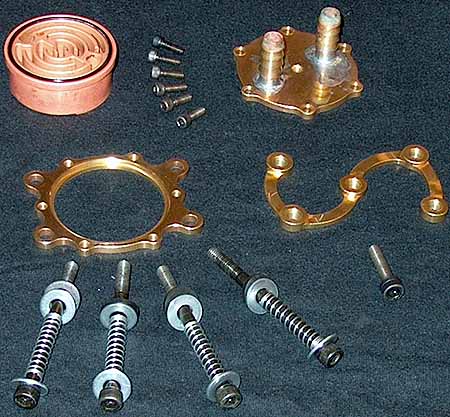 Here it is all assembled: 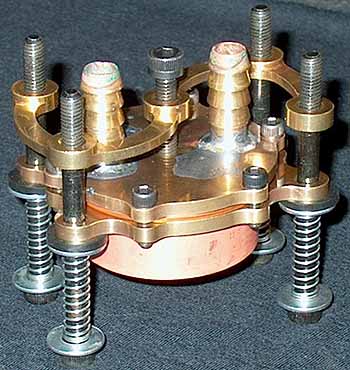 As you can see, my soldering skills need some work. I utilized the 4 holes provided on my A7V motherboard for mounting my block. The four long screws enter from behind the board with springs and isolating rubber washers at the back.

I don’t have any technical figures on the performance of my block at the moment, but I will try to get some as soon as I get a good in-line pump. I’d imagine it will perform well because of the amount of turbulence that is created in the channels.

When you blow into one of the ports, it makes a whizzing sound. The harder you blow, the higher the pitch. It feels somewhat restricted and I assume that it’s from the turbulence.

I also included pictures of the water-block assembly which I created in SolidWorks before I machined any of the parts. As well I included a 3D rendered image of it that I created from the CAD assembly 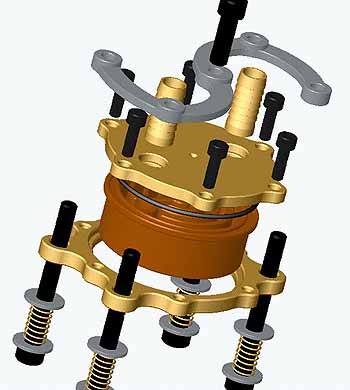 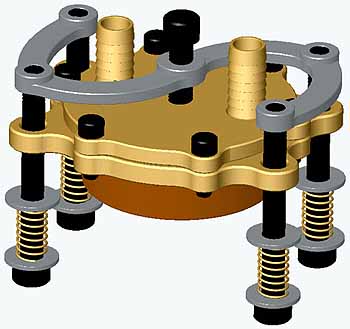 The Next Few Months

Looks like there is a dual core Atom netbook on the market – finally!