Some thoughts on PIV cooling and a performance test of Intel’s PIV heatsink. — Joe

SUMMARY: Intel’s PIV design is a marked improvement over Socket A/370, leading to better CPU cooling.

Intel’s PIV radiates a lot more heat than the PIIIs, and most likely to deal with this heat load, Intel redesigned the socket and came up with a very interesting cooling solution.

On PIV boards you will see this 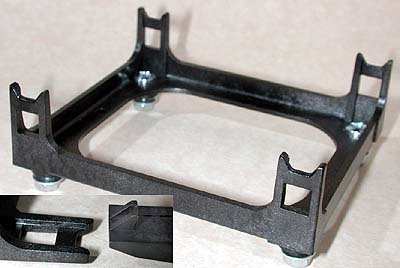 surrounding the socket – there are no lugs on the socket. This rectangular bracket serves as the mounting base for PIV heatsinks. It’s affixed to the motherboard with push pins or bolts, serving as a secure base. The inset shows the basic manner in which heatsinks can use the base.

Basically, an arm slips into the slot and some form of locking lever then exerts downward force to hold the heatsink onto the CPU. This gives you something like this: 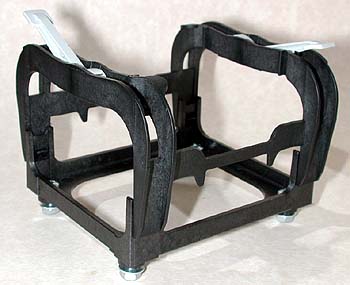 The heatsink then sits inside the “cage”, held in place by the locking levers. Intel specifies a static clip loading of 100 ft/lbs – this is about 5 times the Socket A spec. Now wonder Intel uses a metal spreader on top of the CPU – both to spread heat and protect the core.

All told, Intel came up with a very nice solution; not only is efficiency enhanced by high clamping force, but the physical size of the heatsink can be larger than Socket 370 heatsinks – there’s more area to cover with this arrangement. Last, if you have concerns about heavy Socket A/370 heatsinks, using four holes on the motherboard mitigates this concern.

Intel PIV heatsink is pretty beefy – it does a pretty good job and the fan is so quiet, I could not measure it with my Radio Shack sound meter 8″ from the fan’s intake – it’s below 50 dBA. 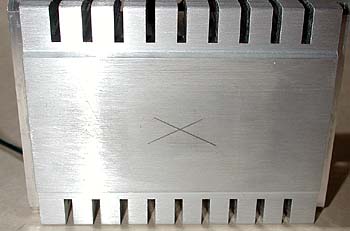 The “X” marks the center of the CPU on the heatsink.

is not the best I’ve seen – it’s a typical aluminum extrusion and there are extrusion marks that you can feel by scraping a fingernail over it – a candidate for lapping. However, as we test PIV heatsinks, this becomes the standard to beat, so I tested it to see how well it does.

The Intel PIV was first tested on the CPU Die Simulator which gives results that are unaffected by motherboard influences. The Simulator uses a small die while the PIV uses a heat spreader plate which gives a much larger surface area – the Simulator results are for comparative rankings only.

I next prepared the Intel PIV by boring a hole completely through the base so I could epoxy a thermocouple above the CPU. The thermocouple is attached to an Omega HH23 Digital Thermometer. Ambient temps were measured with a thermocouple placed about 1 inch from the fan’s intake. I used Prime 95 to stress the CPU on a Lucky Star P4A845D; MBM Temps are CPU Diode Temps.

The integrated heat spreader does a nice job of spreading heat from the die – as a consequence, PIV heatsink C/Ws are not comparable to Flip Chip or Socket A readings – they tend to be lower. In addition, the larger physical size of PIV heatsinks enables more surface area, leading to better cooling and performance.

The Intel PIV heatsink does a very nice cooling job, markedly better than I would have expected. It certainly can be beat, but it’s going to take more design effort on the part of the manufacturers to get substantially better performance.

After handling a half dozen AXIA T-Birds, I found one that would do 1550 aircooled w/ 2.0v on my modded Asus A7V133 (bare board on the bench in my garage – on a cold night). Running a chip like that

The boys from TENNMAX kindly sent me one of their new P3STF Pentium III heatsink and fan combos to look at. This is basically the P3TF with larger fans. The P3TF, as reviewed on other sites, was a fairly good