SUMMARY: A good case for the money. 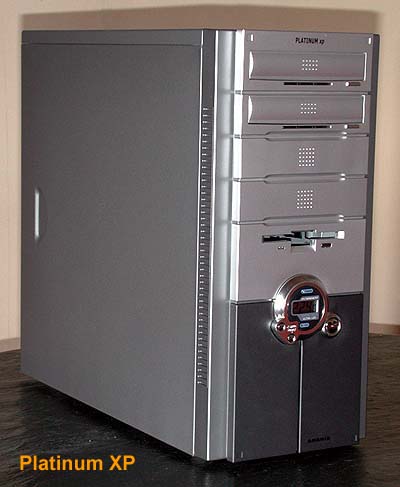 The good guys at Exotic PC were kind enough to send a sample of the Platinum XP PC Case. This case has some features worth noting: 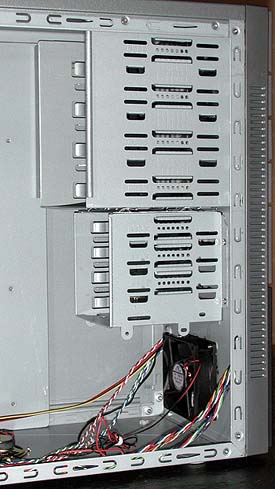 features an internal drive cage that is removable – there are four screws that secure it to the case. The cage is spring-loaded on one side so that you only have to bolt drives on one side. This means you only have to take off the left side cover to remove a drive.

The front intake fan panel under the drive cage is clean – it would not take much to fit a 120mm fan/radiator here. The front panel is screwed onto the case – no quick removal feature. 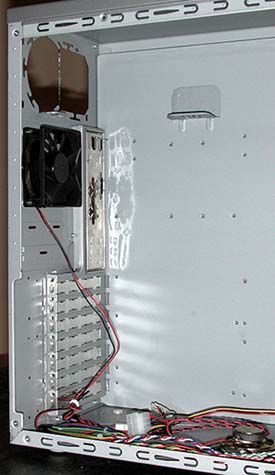 shows the usual stuff plus the rear exhaust fan (these are labelled “FU” – made by a company called “Fukuroyo” – interesting how some things translate). Note that the fan panel is uncluttered – if you’re handy with a Dremel or jigsaw, I think a small radiator could fit in this space.

The back of the case

shows the rear fan panel that is aching for a mod. The front panel 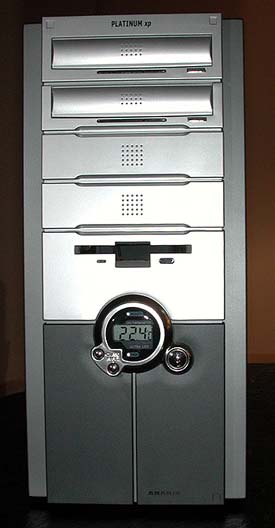 carries the silver (or platinum) theme nicely. I especially like the CD drive covers – there are a lot of nice looking cases that lose it when you mount putty gray CDs onto something like a black front. The CD covers 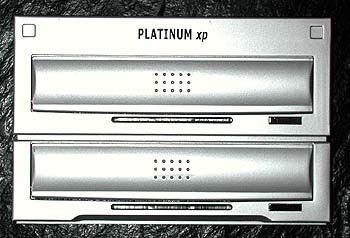 have the open/close button but will not accommodate a volume thumbwheel or earphones. Looking at the cover from the rear 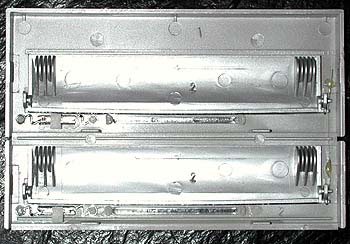 shows a pretty simple setup – a door flap and button. You position the drive so that it is up against the button and that’s it. Last is the LCD Temp Display: 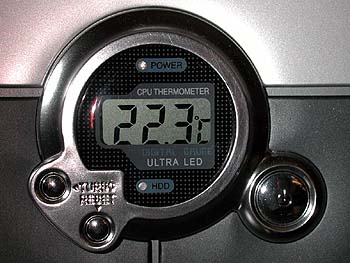 There is a flat, thin temp probe that can slip under a heatsink to read CPU side core temps (obviously you can use this for about anything). The Turbo switch (remember those?) is not for the motherboard – this is a two speed switch for the front and rear case fans.

It’s a clever idea – the Turbo switches between 5 and 12 volts to the fans. If you want, you can add other fans – no reason why you can’t wire in the CPU fan, especially if you’re one of those whose systems are on 24/7 and you can’t sleep at night (a Delta 38 at 5 volts is pretty quiet).

Setting Up The Case

In working with the case, I noticed the following:

Overall, OK to set things up – no real surprises.

Using Digital Doc 5, I monitored interior case temps as shown in the pic below at Idle and while running SiSandra Burn In, with fans at 5 and 12 volts. The system was a P4 1700 cooled with an Intel retail fan on a Gigabyte GA-8SRX. 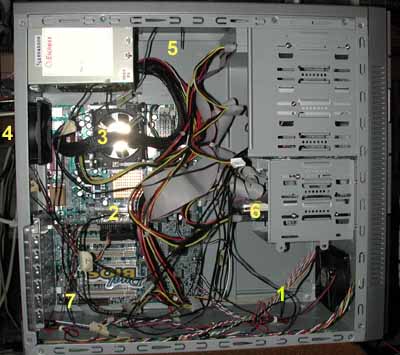 Temps were recorded as follows:

Running fans at full bore makes sense when under stress, but the difference at idle is minor – not worth the noise.

Overall, the Platinum XP has some nice features and is easy to set up. At $69, looks like a good case for the money.

Thanks again to Exotic PC for sending this our way.

Zzzzzzzz . . . . 2003 is shaping up to be a snoozer. Just not a whole lot dramatic and exciting is going to happen for most of the next year. There will be flurries of activity here and there,

The Inquirer reports that AMD will have to yank 2.4GHz Phenoms due to a CPU defect. They got an explanation from AMD which, unfortunately if not surprisingly, doesn’t make much sense. They said this was an errata which they would

(Somewhat affordable) Penryns will be upon us beginning January 20. OK, the prices aren’t going to be that bad, but there’s no point in wasting money, especially if you don’t have a ton to spend to begin with. Most attention,