What could be better than the idea of Xfire? A messaging service that keeps track of your game usage, allows you to type to other gamers without the need of the 2-fingered alt-tab salute. It also automatically downloads patches for your games and is a great source to get new game demos. Well, the guys over at Super Computer International, Inc., had a different idea:

They decided to roll everything a gamer could want into one package, and better yet, there’s no need to sign up (if you have an AIM account). The client offers AIM/ICQ messaging in-game, allows people to host a 32 person VOIP servers (just drag and drop your buddy’s name and your server is started), dynamic server launching (yes you can launch servers for free), server browsing, buddy tracking, player invitations, team management, on-game controls, and even PlayLinc forum access.

When I saw this advertisement on Cyber Athlete League’s web page, I thought it was a great idea. I can now play games and talk to my girlfriend at the same time without having to pick between the two or alt-tabbing every 10 seconds. So I decided to click on that fancy looking banner ad and I downloaded CPL’s flavor of PlayLinc. Little did I know, it would be leading me into an hour of Windows XP hell.

I installed the software (shutting down applications that may interfere with the process, mind you) and it seemed to go off without a hitch. The program launched automatically after installation, I entered in my AIM account info and it logged me on.

Well, I thought it did anyways – the program locked up for a good 5 seconds before it continued.

I dismissed the fact, thinking maybe it was just froze up because it was waiting on the AIM server (which I may never really know). The program was so slow to react to anything I clicked on, and it was just totally sluggish (clogging my dual core AM2 with 50% load on both cores). When I finally got to the settings tab, I had turned off the server lookup function which seemed to settle it down.

To make a long story short, it didn’t. In fact, when I went to play CS my average FPS dropped 30 to 40 percent and the game wasn’t smooth at all. My FPS even dropped out when I tried to open the in-game AIM system and took about 2 or 3 seconds for the frames-per-second to jump back up.

I finally decided to reboot, thinking maybe the program needed one – boy was that a mistake; Windows wouldn’t even boot. I ended up having to do a system restore and this time made sure I was disconnected from the Internet and that all programs were off before I attempted a re-install (and I had re-downloaded the file). This time the program did a wonderful thing: 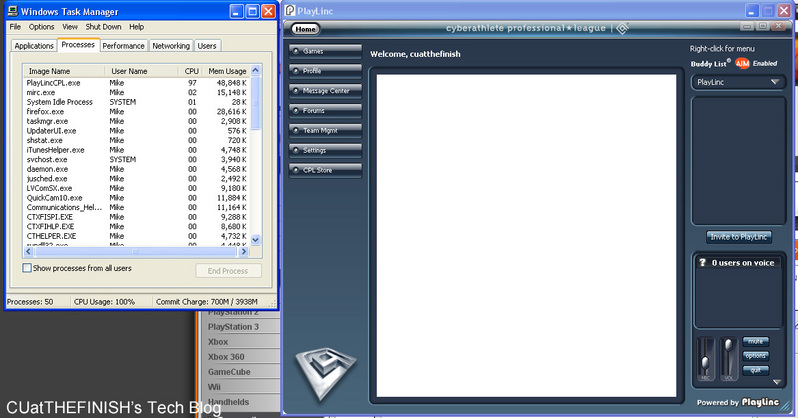 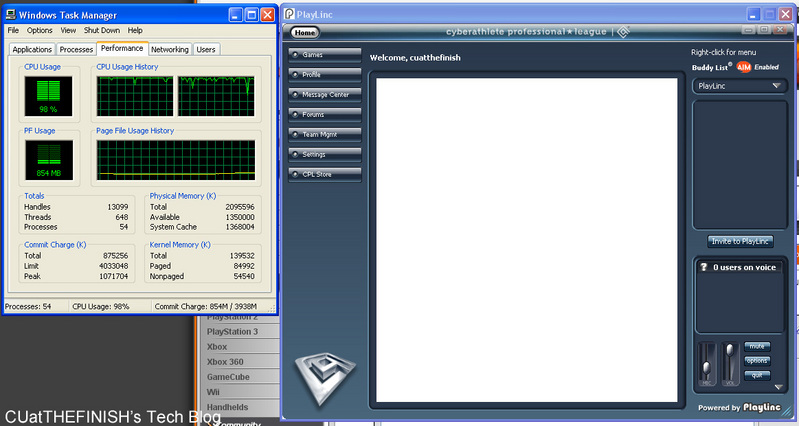 97-99 percent load on both cores and the program would simply not start correctly at all. So I did another reboot and you can guess what happened – Windows XP would not boot again. Managing to fix my system with the restore feature again (as last known good configuration would not work), I decided to not try installing it anymore.

I have found that the program beta launch came in July of this year, so I’ll just say they have a lot of bugs to work out before this program has matured.

If anybody is bold enough to try the other flavor of this program (I haven’t got around to trying that yet) it’s available for download HERE.

ED NOTE: If you have used this program, I’d be interested in your experience with it –
Email Joe with your take on it.

This has been an interesting story. 🙂 Two more “official” links about this story coming from professional associations can be found here and here. Type in “Greece electronic games ban” in a search engine, and you’ll find plenty more, most

Got this email as my wake-up call this morning, entitled, “2200 $45 one day price drop.” “I’d like to know what’s behind this. I read quite a few sites everyday and can’t recall anyone of you guys calling this one.