Before the article I would like to say one thing – indeed I did have the pictures I had promised, but out of the entire roll I took only one came out well. If you really need help setting up a unit after reading this, email me and I will make a large attempt to assist you.

First things first; because of a small mix up, I did not receive the heat sink that I was hoping for but instead received the Global Win FEP-32. Not to look a gift-horse in the mouth, I quickly set to work making a socket-370 cooling unit. One thing that I should probably mention right off the bat is that I had a problem in the past. The first cooling unit that I made was used on a K6/2 300. It worked perfectly and I was able to cool my chip into the low 40’s F with it. I then moved it over to a K6-3 450 and it worked fine achieving similar results for cooling.

The problem arose when one day, unbeknownst to me while I was away, that it became pretty warm and the humidity level got pretty high. I then began having problems – the computer would suddenly lock up and I had absolutely no idea as to why. After awhile I took apart my cooling unit and removed the chip from its socket and what I found was pure stupidity on my part. The socket was completely black and the bottom of the chip was black and green from the pins corroding. I eventually popped the casing off the chip when it would no longer boot, only to discover that the entire inside had water damage. What did I learn from this? That moisture sucks. The cooler that I am going to walk you through prevents condensation, is inexpensive and simple to build.

I am going to recommend for this little project a GlobalWin FEP-32, one of our peltier units, Radio Shack’s silicone grease, 4″ tie-wraps, 14″ tie-wraps, and Foamsialar. Also, whenever I talk about the thermal compound I will just call it heat sink goop – sorry if this offends you. 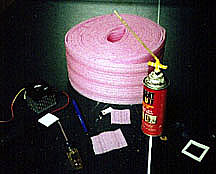 I recommend the GlobalWin FEP-32 only because it will fit just about any board. If the FDP-32 fits your board use that, but unless you know for certain that it does fit your board I would recommend not getting one. The peltier kits that https://www.overclockers.com sells include all the necessary parts – some thermal goop, a cold plate, and in addition to the peltier a little piece of foam to help in the prevention of condensation. I also recommend buying some of Radio Shack’s silicone-based heat sink compound. This stuff performs real well and you get a nice sized tube for only $1.99. For the project you also need some tie-wraps albeit only 3, but I would suggest buying some extras. Foamsialar is the pink foam pictured below – it is used as insulation and is real inexpensive.

The first thing that you are going to want to do is trace that white piece of foam that you got with your peltier kit. Or if you are one of those people who didn’t order one and already had a peltier, what you are going to want to do is cut the Foamsialar so that there is a one and a half inch square opening with about a quarter of an inch of material surrounding the opening. The people who ordered the kit are must cut out 2 squares, while the people who did not order one must cut out 3. Also make sure that the Foamsialar is not hanging over on to the top of the peltier.

The next thing you are going to want to do after making the foam is to take the fan off of your FEP-32 and remove the metal clip that is used as the mounting bracket. After you have removed the fan, screw it back on.

Ok – for the next step, it will really help if you can remove your motherboard from your case or be able to turn it on its side. In fact I strongly suggest that you either put the case on its side or remove your motherboard. While I was making the unit I had an old socket 7 motherboard lying around so I just built the unit on it. You are going to want to lap your processor and the cold plate that was supplied with your kit. The cold plate will be pretty smooth but lap it just in case. The lapping will just allow for more heat to transfer between the surfaces.

After both have been lapped you are going to assemble the unit. First, place some of that heat sink goop on the top of your chip and spread it around with a little extra in the center. The cold plate will then sit on top of the chip. The cold plate is used because it will retain the coldness from your peltier longer than without one. After you have placed the cold plate on top of your chip push down onto the top of the cold plate real hard and twist it back and forth, this will make the gap between the two much smaller. Now place your first layer of insulation down. This will be the white foam for those of your that bought a peltier kit and a piece of the Foamsialar for those of you that didn’t. The foam should completely surround the cold plate.

I can already here some of you saying “Why not just use Great Stuff?” Well for simple reason that I tried to but it didn’t work quite right. Great Stuff comes in a nice little bottle and when you spray it out it becomes foam that expands and eventually becomes hard. See this is where my title “Aaron Shaves His Legs” came about. When I first started using it I got some on my hands; yes I did see the warnings on the side of the bottle and yes I choose to not follow them. When you get Great Stuff on fabric, good luck getting it off because it probably isn’t going to happen.

Also the stuff that I got onto my hand is still not completely off and it has been on for a couple of days now. After I realized that I had some of the crap on me, I went to try and wash it off with soap and water and that did absolutely nothing. I then began dumping just about every chemical that was present in my house on to my hands. Basically every cleaning agent and then some was poured on to my hands.

Nothing got it off – all I was able to do was make my hands non-sticky; I can’t stand it when my hands are sticky. Also I was able to create all kinds of neat little reactions that made my hands hurt. After realizing that there was no easy way to get it off, I thought about my leg and what I was going to do. I attempted to shave it. All of the hair was matted down and it did not look very pleasant, and at least if I shaved my leg I would have a story right?

Oh yeah back to the article. After you have the peltier on top of the cold plate, take a piece of the Foamsialar and squeeze one side down so that it is flat. This will be the side the goes over the wires. After your second layer is down place the third on top of the second. Now place the heat sink on the top of the insulation. 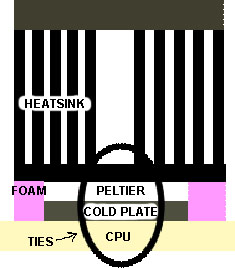 The top brown layer is the fan, while the black spikes and base are the heat sink. The pink stuff is the insulation that should surround the peltier and cold plate. The yellow is the socket for which your chip resides. The black circle is the tie-wrap that gets mounted to the socket’s base.

The big tie-wrap will slide through the opening that you should have left with the smaller tie wraps and then pull over the top and back down into its connector. Remember – you must push down hard on the top of your unit, while pulling the big tie-wrap tight. Also you may tighten the two smaller ones.

I truly hope this will allow some of you to get to the next level stable. And once again I would like to apologize for not having the pictures I promised. With the next part I will have pictures.

A Beginner’s Guide To Securing a Wireless Network