SUMMARY: Another interesting radial fin design that delivers very good Socket A performance, even with the stock fan.

Crazy PC received an evaluation sample of the Power Cooler and asked me to test it out. Its design is similar to the ThermoEngine in some respects, although the implementation is more interesting. I’m going to go into more detail about the design than normally, so bear with me:

This is something you don’t see too often: 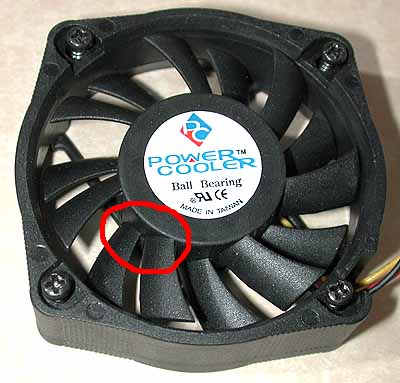 Look closely and you’ll see there are two layers of blades on the hub – I asked Andy Lemont about this:

Blade stagger on the fan is an old concept with many papers written on the subject; generally it is done as a noise reduction feature. You may have seen it in old car radiator fans – they made an “X” then offset on one side of the “X” they added a blade. it looked odd but it was in balance.

I found it about as noisy as a YS Tech, although this fan spins at about 5,350 rpm while a YS Tech is about 4,400 rpm, indicating that the Power Cooler is probably around 30 cfm. I think this is a Delta unit (black label on the hub) but lacking any identification, I can’t get a spec on it. 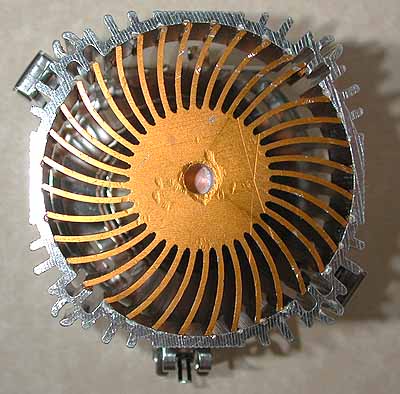 The inside looks like a spinning turbine. The forward sweep of the fins dovetails with the fan sweep. This creates a higher pressure gradient on the fin which is good for a high heat transfer coefficient (thanks again to Andy). Don’t let the color fool you – the fins are aluminum, not copper.

If you look closely at the hole in the center, you will see the top of a copper core. What you can’t see is what appears to be white thermal grease around the edges of the hole’s bottom; I am guessing that thermal grease was used to fill any voids between the copper core and the aluminum fins. 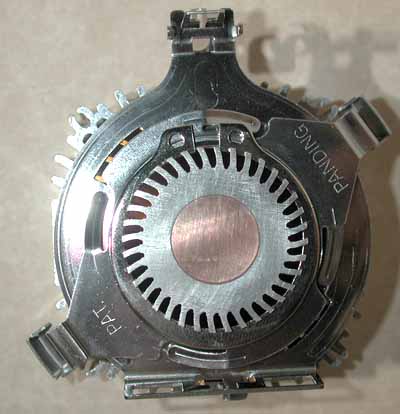 Looking at the base, you see the copper core. It’s large enough to almost completely cover a T-Bird’s core – there may be a little edge contacting the aluminum, depending on positioning. I doubt this affects performance too much. The copper core is about 1 1/4″ long by about 21/32″ diameter. I had to drill completely through the core to insert a thermocouple. 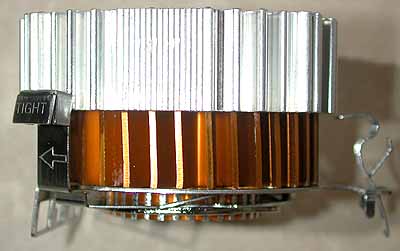 This is one of the Power Cooler’s strong points: By far, this is the EASIEST heatsink to mount I have seen to date.

You place the heatsink over the CPU and engage the socket’s lugs – there is NO pushing or pressure on the lugs at this point. With both the rear and front tabs located on the lugs, you then rotate the tabs (with arrows for “TIGHT” and “LOOSE”) less than a quarter turn and it’s secure. No screwdriver, broken fingers etc.

If all heatsink manufacturers paid as much attention to mounting as Power Cooler has, we would have NO PROBLEMS with mangled CPUs.

Taking it off is as easy as putting it on – a real pleasure to see this design.

OK – interesting stuff, but what about performance?

I prepared the Power Cooler by boring a hole completely through the copper core so I could epoxy a thermocouple above the CPU. The thermocouple is attached to an Omega HH23 Digital Thermometer. Ambient temps were measured with a thermocouple placed about 1 inch from the fan’s intake. I used Prime 95 to stress the CPU on an Iwill KK266, running a T-Bird 1133 @ 1330 (82.7 watts). Noise levels were measured with a Radio Shack Sound Meter placed 8 inches above the fan’s intake. Arctic Silver grease was used in all tests.

The “Extreme” is a fan/motor from a dryer – VERY noisy but a great way to see how much “overhead” a heatsink has. In this case, the noisy Delta 38 gets the Power Cooler pretty close to its maximum performance levels. At 0.23 with this fan, the Power Cooler is “in the hunt”. Even with the quieter stock fan (noise about the same as a 26 cfm YS Tech), the Power Cooler is acceptable for an overclocked T-Bird.

No doubt a portion of its performance is due to air flow washing over the CPU’s ceramic carrier. I measured the CPU back temp with a thermocouple located at the CPU’s back center. The difference between the CPU’s top core temps and the back ranged from 1.6C with the stock fan to 0.4C with the “Extreme” – very low compared to others I have measured. Note that MBM temps are LOWER than measured CPU temps – air flow over the ceramic core is the reason (cooling the in-socket thermistor).

You may see other reviewers go GAGA over the Power Cooler – this is why they will.

The Power Cooler is an extremely competitive cooling solution with an absolutely clever design and first rate mounting system. Let’s hope they don’t screw it up by modifying the design badly as it enters distribution.

Thanks again to Crazy PC for sending us this sample to test.