A while ago, I was looking for an easy way to upgrade my old system. At that time, I had an old Packard Bell set up with at P233 MMX and only 32 MB of RAM. I spent a long time looking around and this is what I finally found: 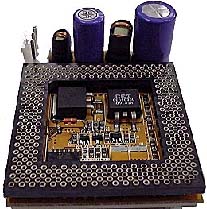 Picture by permission from PowerLeap.

I took my time to read up on it and decided to purchase the adapter only and pick up a chip later.

It arrived at my house shortly and in good shape; it was packed very well and you can tell the folks at PowerLeap care about their products. I hastily opened the box and found a decent set of instructions, along with a disk containing a program called the “CPU Control Panel”.

Not being one to waste any time, I picked up an AMD K6-2 500 MHz chip from the local computer store and started reading the directions included with the adapter. I have to point out here that in my model, the switches were right under where the chip will be placed. This can be very frustrating when you have to remove the chip for each jumper change.

Also you’ll need a pair of tweezers for the switches – they are covered by a shrink-like plastic sheet that can be a pain to deal with.

After setting the switches to the proper settings as per my handy manual, I slipped in my AMD K2-6 500 MHz chip, moved the fan down the bolts, and tightened each nut evenly in a cross wise pattern. Checking everything over, I then looked at my board to line up the pins with the Socket. 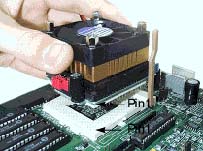 Picture by permission from PowerLeap.

After having to apply a scary amount of pressure to seat the CPU properly, I heard several pops and thought for a moment that I had crushed the chip. After double checking all the connections, I plugged the included power supply adapter into an unused 12v PF and plugged the other end of the cord into the adapter, giving the nice looking fan its power.

To my relief, the system booted up; however, it showed my CPU as an Intel 266 MMX. Upon reaching Windows, I noticed it ran very buggy, but as soon as I installed the “CPU Control Panel” software, everything worked very nicely and the speed increase was noticeable instantly upon a restart.

Before that, I had installed a Voodoo3 3000 PCI card and now I can finally take advantage of it – everything runs very smoothly. After adding another 64 MB of RAM, I’d say I’m very happy with this improvement.

I highly recommend Powerleap Adapters to anyone looking to upgrade their old system. I was told it was not possible and I would have to get a new motherboard and CPU; however, this adapter did the trick for my aging system nicely.

On a sad note, my system only runs at 66 MHz FSB, so the max I can take the 500 MHz chip is 400 MHz with a multiplier of 6x. Currently I can find no other way to increase the FSB and I’m still looking.

Overall, I am satisfied with the improvement made possible by the Powerleap Adapter. The cost of the complete upgrade was about the price of a decent motherboard, in total around $110 dollars.

However, for those of you wishing a quick and nearly painless way to get your old computer back in the running, this is, in my opinion, a decent option.

Many of our readers are the “go-to” people when friends set out to buy a new PC. I recently was asked by a friend on what to buy now that her three year old PC gave up the ghost, and