UPDATE 4/16/00: Beginning to look like CeleMines do not work with this adapter on the BP6 to run dual – hopefully this can be fixed in a future version.

SUMMARY: A boon to BP6 owners looking for Coppermine action.

PowerLeap was nice enough to send us their latest – the NEO S370 Socket 370 Adapter. This product allows users to adapt many Celeron socket 370 boards to take Intel’s Coppermines. For those of you who have ABIT’s BP6, this is the adapter to get you into hyper-space. Coupled with sweet running PIII600Es, 1600 MHz is an easy reach and, with a pair of hot CeleMine 566s, 2000 MHz? Pinch me – am I dreaming? 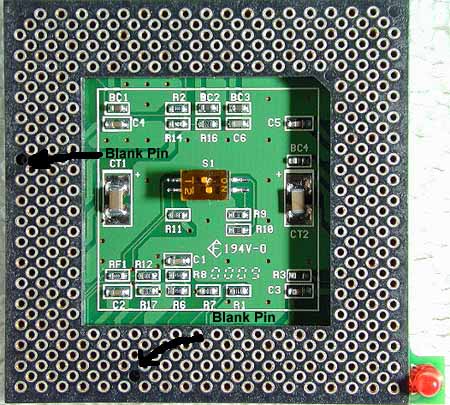 The first pic shows the front of the NEO S370. Really not a lot to see – since this adapter DOES NOT have voltage settings, the circuitry is fairly simple: The objective is to “adapt the pin signals of FC-PGA CPUs so that they can run on motherboards with the PPGA form factor”. I’ll get into the stuff inside below. Note the blank pins.

Also note the LED Indicator on the adapter. PowerLeap clearly warns users NOT to remove the adapter in a powered-up board. If you see the LED lit, you may damage the CPU if you remove it. 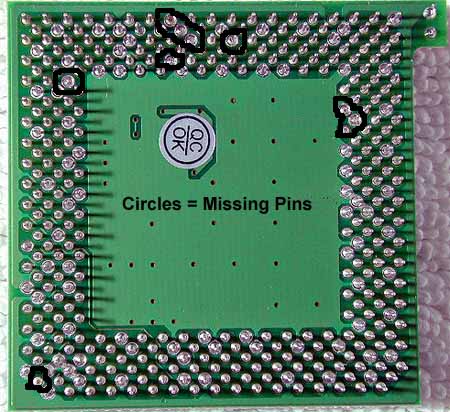 The back also is not too exciting, but note the missing pins.

On the inside of the socket, you will see a DIP Switch. This is used to set the adapter to the CPU speed: Three settings – 66, 100 and 133 MHz. On PowerLeap’s site, there is a list of compatible motherboards and they have a BM6 listed as working with the CeleMine 566, so I think it will be OK; however, the current manual does not mention the CeleMines, so be advised – it may be on a motherboard by motherboard basis. 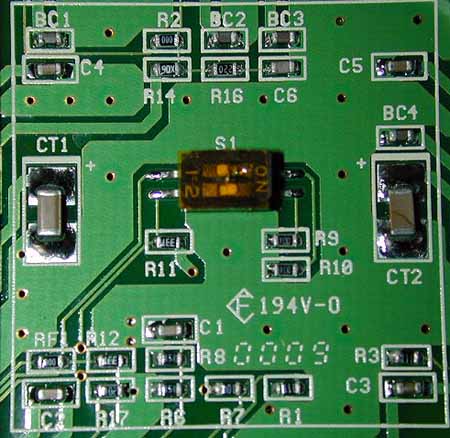 The DEFAULT setting is for 100 MHz.

Now using the adapter will render many heatsinks difficult to mount – the adapter is 5/32″ (4mm) thick, so using the existing heatsink clip might not be possible. PowerLeap includes a heatsink (see below), but frankly it’s grossly undersized for any serious user. Be prepared to do some adapting if you are going to use your existing heatsink. The pic below compares the PowerLeap to the Alpha PEP66 so you can get some idea of relative sizes. 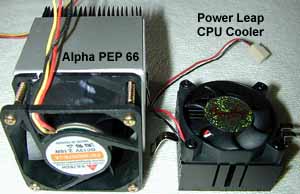 The best thing on the PowerLeap heatsink may be the clip – possible to use it in another heatsink.

The manual that comes with the PowerLeap NEO S370 is 18 pages long – lots of pictures on how to mount the CPU on the adapter etc. The FAQs are informative and following is a brief summary of the more salient points:

As more details emerge, we’ll update. PowerLeap plans to introduce other versions of the product, so expect one with voltage settings as well – do not know when.

MS Faces Class-Action Suit In Wake of Virus Attacks. Half-Life Source Code Stolen. These acts have much in common. Both (not the lawsuit, the virus attacks) are acts of sabotage. Blame The Patient On one level, blaming Microsoft for the

SUMMARY: Contrary to what I expected, this little drive cooler lowered my drive temp by over 3 C. Cheap, fairly quiet and effective – not a bad addition if you have 7400 or 10,000 rpm drives. As hard drive speeds

The, shall we say, officially-sponsored benchmark numbers for Conroe are extremely impressive. Even the relatively lousy numbers are very impressive. When you get to the gaming numbers, and the 20% improvement turns into 30%, they go from impressive to, well,