This short piece isn’t so much a formal review, but an opportunity to revisit three of the six heatsinks tested in my first review at Overclockers.com. My test system has changed quite a bit since then, so it’s a good idea to re-examine the performance of some of the top coolers on the market.  I have switched my 980X processor for an i7 930, so I could upgrade my main system at home. In fact, the 930 is actually harder to cool at 4 GHz than the 980x at the same speed. I also changed the case, which can affect cooling performance. Originally I was using an Antec 1040 clone case (Chieftech Dragon) but a few months ago I switched to the Inwin Dragon Rider case that I reviewed as it is much more representative of modern case designs.

The three heatsinks that I have re-tested are:

Re-testing these three heatsinks will help to build up my database of high performance heatsinks on my present testing platform, thus allowing for more and better comparisons in upcoming reviews. Thanks to Overclockers Forums Senior Member Reefa_Madness for generously loaning me the Megahalems for testing!

There is no need to load this article up with tons of pictures and descriptions about mounting the heatsinks – that was done in the original review. However, this article will contain updated results with these coolers using several different types of fans. In addition, I will conduct a full comparison of all heatsinks currently in the Overclockers cooling lab.

Here are the fans used for testing:

The testbed system is configured as follows:

The testing methodology used is the same as I used with my previous reviews:

All energy saving features of the motherboard and processor were turned off to keep it from down clocking the processor speed and vcore. All fan control functions were turned off in bios to keep the fans at maximum speed. For processor temperature monitoring purposes, I am using Real Temp 3.46, with logging enabled at 2 second intervals. For room temperature monitoring, I am using a Fluke Model 52-2 and using a “K” type thermocouple that is inserted into the case front where the front intake fan is mounted. The Fluke records the maximum, minimum and average temps during the run at 1 second intervals.

Temperatures in my computer room were maintained as close as possible to around an 18 °C average during the run, as measured at the lower front intake fan by the Fluke. At the end of the test run, I logged the maximum, minimum and average temperature. The maximum and minimum temps are given as recorded by Real Temp, but the average temperatures have been adjusted to a constant 18 °C as derived from the Fluke average temps.

For loading the CPU, I used Prime95 version 25.8 using in-place large FFT’s and ran it for 30 minutes to stabilize temps. After 30 minutes, I would exit Prime95 and let the CPU idle for at least 10 minutes. The highest recorded temperature from the hottest core for each run was then recorded off of the Real Temp log, the lowest temperature on any core was recorded and the average temperature on the hottest core was calculated during the load portion of each run and adjusted to a constant 18 °C.

Each fan configuration was tested with three remounts of the heatsink, and the lowest average temperature run recorded, to minimize any problems between mount to mount installations.

First up is a recapitulation of the stock results acheived with these heatsinks in my original review with the initial test setup. The Megahalems is being tested with the TR-FBD-1600 Thermalright fan since Prolimatech does not sell the Megahalems with a fan, just to allow easy comparison of the relative performance of it with the other two heatsinks. The TRUE Rev. C was tested with the same fan since it is the original fan that came with this retail model heatsink. The Cogage True Spirit was tested with the fan that it came shipped with. This should allow a true “out of the box” performance comparison between the three heatsinks. 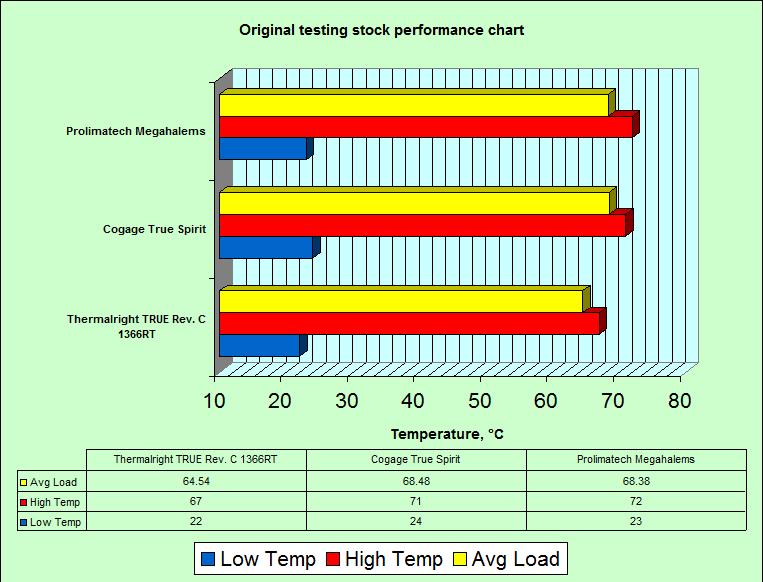 The next chart gives my results with these three heatsinks with my present test setup in their stock configuration: 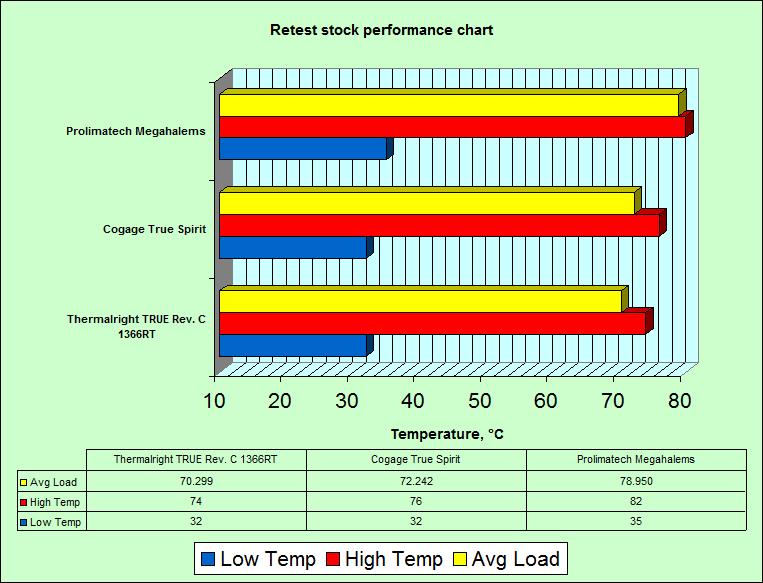 With my present test setup, I am seeing the same order between the heatsinks in performance, but it looks like the Megahalems is having some issues dealing with the higher heat load of the i7 930 overclocked to 4 GHz as compared to the 980X at the same clock speed. In the first round of testing, it was very close to the True Spirit in performance, but I am now seeing a separation in cooling performance between them, with the Megahalems lagging further behind.

Next up is a chart showing the performance of the Prolimatech Megahalems with the various fans all the three heatsinks were tested with: 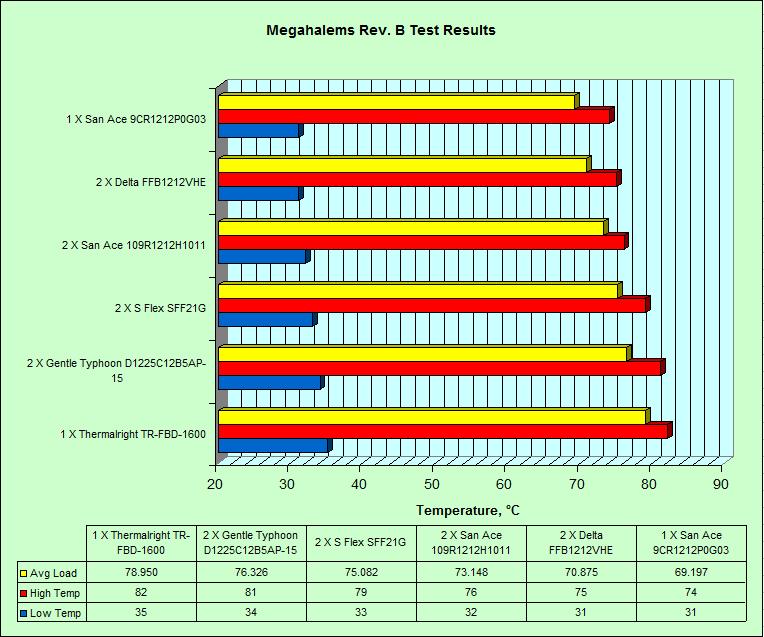 The following chart gives the performance of the Cogage True Spirit with the fans used on all three heatsinks: 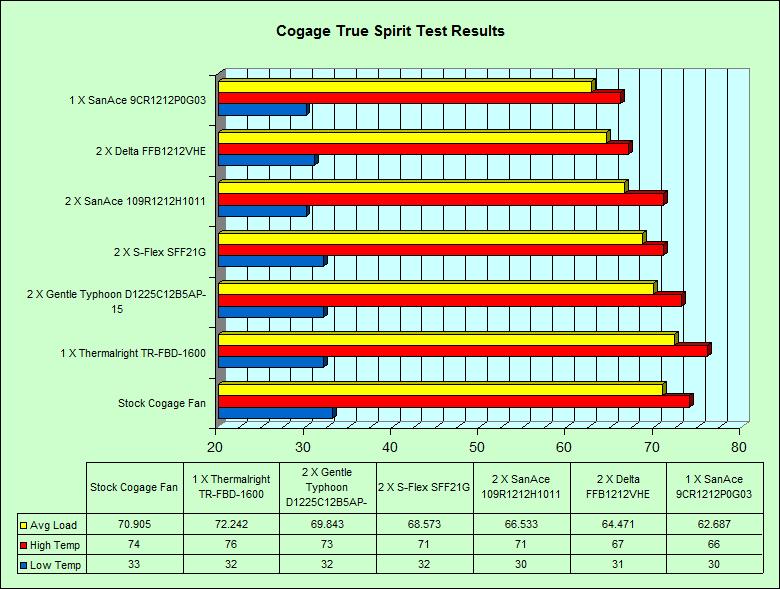 Finally, we get to the TRUE Rev. C and it’s performance with the same fans: 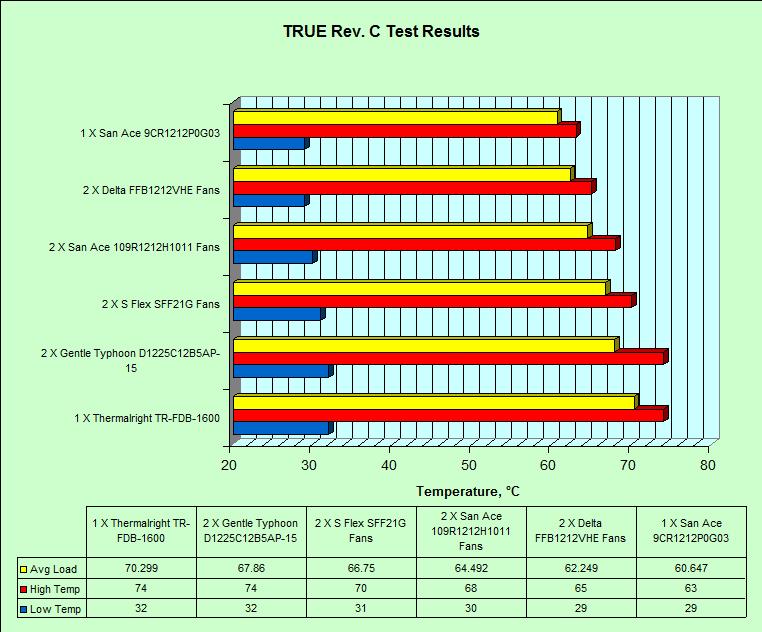 Finally, here is a chart comparing these three heatsinks with other heatsinks I have tested at 4 GHz on my present testbed setup in their stock out-of-the-box configurations: 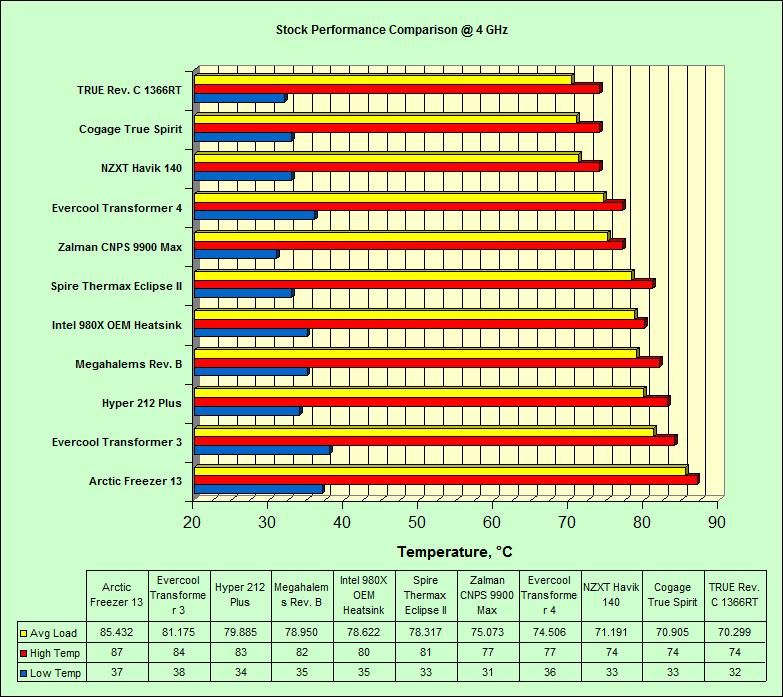 As we can see here, the numbers may have changed between the original test setup and this retest, but the order of finish is still the same. The oldest design of the bunch, the TRUE Rev. C, still comes out as the top cooler of the three. The Cogage True Spirit comes in at a pretty close second place and is by far the best price/performance leader of the three. And finally, we have the Prolimatech Megahalems bringing up the rear. It’s performance is pretty good, but not even close to the top performance TRUE Rev. C.

I searched for the best pricing I can find on the three heatsinks (correct at time of publishing). For the Prolimatech Megahalems, I found it for sale from two of the cooling vendors I usually shop (including Jab-Tech) at for $59.95 (not including shipping). The Ultra120 eXtreme 1366RT Rev.C, is on sale for for $59.99 at SuperBiiz with free shipping. Since it is a complete ready-to-run offering, that clearly beats out the Megahalems both in pure performance and in price/performance. Finally, after looking around, I found the Cogage True Spirit for sale for $31.99 at SVC (not including shipping). Since it is also a complete cooling solution, nothing else will be needed to get this up and running on your LGA1366 system, and as such makes the True Spirit the clear price/performance bargain of the three. It’s performance is within a hair of the TRUE Rev. C for less than two thirds the cost delivered to your door.

This concludes my update to these three heatsinks: I hope that you find this information useful. Stay tuned, as I have some new offerings coming up shortly.

About Jim Gautreaux 25 Articles
I work in the oil drilling industry, mostly in the Gulf of Mexico off the coasts of Louisiana, Texas, Mississippi and Alabama. I got into building and overclocking computers in the 90's and haven't looked back since.

Instead of the usual tall, tower-style heatsink we look at, the Prolimatech Samuel 17 is designed for micro-ATX and mini-ITX sized systems that lack the space for large cooling solutions. Let’s see if Prolimatech packed big performance into this small package… Read More

Not all cases have room for a full tower heatsink. So, Noctua provides a blow-down variety with six heat pipes and a 140 mm fan. That was the NH-C14, and it is quite a cooler. So, what’s new? The NH-C14S (note the change in the model number), with the finstack moved over to make room for cards in the top PCIE slot. How well does this heatsink cool? Let’s find out. Read More

One question which frequently turns up on forums, “What’s the best fan?”, but even that question is too broad. Let’s tighten our focus to 140 mm case fans. They can move air through your case and stay reasonably quiet while they are doing that. So let’s look at a bunch. Read More