Howdy everyone!! What I am writing about today is the continuance of my first article Project XP Stock Cooler.

After getting some great feedback from people in the community, I feel obligated to continue my project to completion. As you all know from reading the first article, I wanted to find out how far a stock cooling system could be pushed. Now I went ahead with plans to cool my system even further.

This project also has budget constraints, just as the first one had. A good amount of money could be spent, but then how would I afford to go to school? I will use less than $50 in total to do this entire project. For this, I had to drop the “stock” part of my project because we are going aftermarket in a big way.

Let’s face the facts everyone -the stock heatsink that AMD provides is a piece of junk. How would they expect any person to use one of those things and even say overclock in the same sentence? Of course, running at around 60C stock as seen with my previous article, the heatsink had to go. In comes the Thermalright AX-7!! 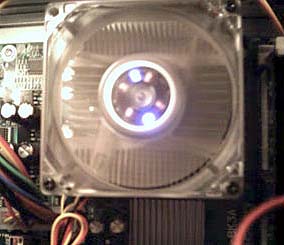 This is seriously one of the most beautiful heatsinks I have ever used. It’s a copper base/aluminum finned heatsink that cools about as well as an average water-cooling system. The reason I chose this heatsink was that it has great overclocking ability – but also it’s cheap. At about $22.95, this heatsink is a great value for the performance.

On top of that I also bought a Crystal LED fan to put on to of it. This fan is 80mm x 25mm, pushes 53 CFM at 49 decibels and adjustable to 30 decibels and 35 CFM. The AX-7 will accept 80mm fans which leaves it open for many possibilities. Although I could have gone for the Delta Tornado, I wanted an adjustable fan that would be cool looking too, so the crystal fan is a great buy and great deal.

CAUTION: The clip requires a screwdriver to put on and if you slip, you will destroy your motherboard. Use finesse and as little force as possible. The object is to put the clip on the lugs, not to push the heatsink thru the motherboard. If you require instructions on how to properly put on a heatsink, you can refer to my previous article or many others on the web site.

Of course, before I put the heatsink on I used Arctic Silver 3 (Refer to previous article for help again…).

Now that the heatsink is on the motherboard and secured, it’s time to put the fan on. The screws that come with the heatsink will work with 25 or 32mm fans, so it doesn’t matter. The thing to remember is use the rubber washers that are supplied or your fan will rattle your brain out of your skull and will effect your airflow into the heatsink – just use them.

This heatsink requires the screws to be turned into the heatsink using the fins of the sink as the screw holes. This means you can use any size fan you want. After you have it secured, make sure that the fan is PLUGGED IN AND THEN DOUBLE CHECK EVERYTHING OR YOU WILL KILL YOUR CPU AND POSSIBLY MOTHERBOARD!! Here is what it looks like after it was installed in my computer.

NOTE: These temperatures are after I OVERCLOCKED, so that’s why they are a little high. Instead of the stock 1.75 volts, I am running 1.85 volts to compensate for the overclock.
My CPU this time around is the AGOIA Y 1600+, not the AGOGA 1800+ I did last time.
So this is a 350 MHz overclock from the stock 1.4 gigs. Also my ambient temp in my room is pushing 80 degrees Fahrenheit due to a haywire heating system – LOL.

After the success of the new cooling system, I felt that I had better cool the other heat producing parts of the computer – but how would I do it on a budget?
{mospagebreak}

My Geforce 3 ti200 has been a major player in the heat that my system puts out. After playing 5-6 hours of Everquest, my graphics card is hot enough to cook eggs on. Also, considering it is passively cooled (without a fan, just a heatsink) makes it even hotter than it should be.

For those that don’t know what a slot cooler is, it is basically a fan that occupies a PCI slot. It’s good practice to use the furthest slots away from the AGP slot to avoid issues, so I didn’t care about the number one slot, so in goes the slot cooler. Slot coolers are great and cheap ways to cool a card without resorting to surgery to pry a heatsink off.

The end result of the slot cooler underneath the graphics card directly under the GPU was pretty good, in my book. It lowered temperatures in the case by almost 3C and allowed for some mild overclocking of the graphics card. I don’t have any 3DMark benchmarks, but maybe later. Well, after having better then expected results in the cooling area, it was time for making all my work look as cool as it ran – in comes the PC case window.
{mospagebreak}

OK, so you’re trying to ask me right now these questions:

How do you expect to put a window in your computer for less than 15 bucks?
Is it even possible?
And why would anyone care about what’s inside a computer?

Home Depot is the place to go for any case mod stuff. I’ll show you exactly how to do a window mod for not under $15, but fewer than 3 bucks. First off, you must measure how big you want your window on your computer. I chose the no-nonsense rectangle design that is 11″ x 14″.

This is the part where we need to address some important issues.

CAUTION: You must wear safety glasses at all times when working with any type of metal cutting or drilling project. Unlike wood, metal fragments in your eye will rust and make you blind. Just remember that you’re cutting a hole in a metal case to put a window in – Like you’re not any more of a dork as it is try explaining what you were doing to a doctor.

First off we need to layout the plexi and put it where you want it. After you do that, draw an outline VERY lightly with a PENCIL. Then after you have it laid out, measure in half an inch or more to get a lip for the bolts to secure the plexi with. If you make the mistake of cutting the outline of the plexi, you can always use trim from an auto shop and rig it – but just measure in and make a lip.

After the layout, in comes the drill to make the pilot hole. If you’re using a Dremel, then you’re the lucky ones and can just cut the case easily. For all of those using the jigsaw method like myself, then here we go. Make a pilot hole using the drill and make it away from the edge of the cutting line by at least an inch.

Getting the jigsaw started, try to make one continuous run. This part is loud, so if you’re hearing is a little bad or really sensitive, then wear ear protection also. Use the highest speed you can and go SLOWLY. IF you go too fast, then you can dent the metal or bang up your hands pretty bad.

Next, using the jigsaw, you can clean up any edges that were off a little. Then using the sandpaper in the sanding block, clean up the edges so you don’t hurt yourself or scratch the plexi later on. Make sure that any metal shavings are off the side panel or you run the risk of shorting your system parts.

Now drill holes at each of the corners and then one in the middle of each of the sides to prevent any flapping. Then transfer the holes onto the plexi and CAREFULLY drill them out. I have broken many pieces of plexi by using too much strength so be gentle. Then see if it fits and put the screws in and BANG you have a window in your computer for under three dollars. 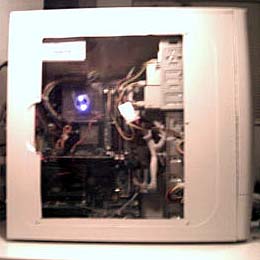 Next thing that must happen is to find a good way to spend the other $11 – did you just say Cold Cathode Tube – I did!!!
{mospagebreak}

Part Four: Why do it if you can’t see it?

This is VERY easy. All you do is place the tube where you want some light and plug it in and turn it on. My kit was from SVcompucycle.com and was very easy and cheap. I just mounted the tube on the bottom of my computer case to illuminate upwards to show off my entire computer.

If you want the switch on the outside of your computer, just drill a ¾ inch hole and slip the switch in. Since I have a mid tower, one of these lights was plenty for my whole case. I chose blue because the LED’s on my heatsink fan were blue, so might as well match. Just click it in and turn it on and WOW. 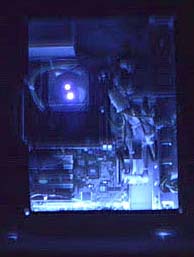 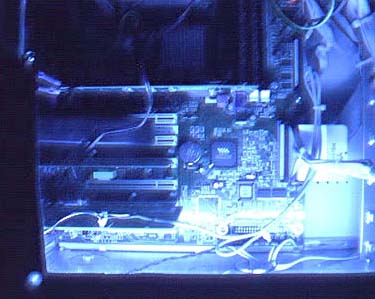 Now the comp looks and works great and all “around” my budget of 50 dollars.

Once again, I hope that I have helped show you it’s possible to be cheap and modify your computer in a great way. This will conclude my work on this computer; however, I can easily see myself doing another and another.

Now that I have a really cool working computer, I can do more crazy things and you’ll be the first to find out. I would love to hear any feedback regarding this article so I know what to improve on in the future articles I will write for Overclockers.com. Thanks again and remember to be safe and have FUN!!!!