UPDATE 4/5/00: The hack is easy – getting it work in some situations is more difficult; two experiences:

My experience using the Promise FastTrak66 RAID controller with Windows 2000.

I’m sure you’ve seen all the reviews of the Promise FastTrak66 IDE Raid controller on Overclockers.com. I can tell you from personal experience that the controller is extremely fast. I’m running it with 4 IBM 20 G Ultra66 IDE hard drives with two hardware striped sets and it works great. It is recognized by Windows 95 and 98 natively and has good drivers for NT 4.0, but Windows 2000 has problems – serious setup issues.

Windows 2000 uses Plug and Pray to recognize all the installed hardware and erroneously recognizes the FastTrak 66 as a Promise Ultra 66 controller. On Promises web site they say, “We are currently working with Microsoft to resolve the issue by the first service release of the OS”. It almost sounds like they’re blaming Microsoft for the problem.

But if you’ve been reading other articles on Overclockers, specifically, “Promise Ultra66 Hack”, you might see why this problem is occurring. Apparently, the Promise Ultra66 and the FastTrak66 are the same card except for the presence of a single resistor on the FastTrak. I believe that both cards are reporting themselves to the Plug and play subsystem as an Ultra66.

What does this mean to you? Well, without jumping through some major hoops, you cannot make Windows 2000 boot from the Promise Controller. If you try to install Windows 2000, you won’t discover this problem until after the first reboot during the install phase. You’ll see a message indicating that the Ultra66 controller cannot be found. Bummer.

Promise has a few articles on their web page that describe a work around and ONE of them does indeed work – I’ve tested it. You can find it at HERE. I’ve found two other articles on their site that are not as complete as this one and they DID NOT WORK for me.

One of the limitations of this work around is that Windows 2000 must be installed to a FAT16 or FAT32 partition. After you have the OS successfully installed, you can convert to NTFS.

I didn’t like this work-around so my solution was to add a 5th IBM 20 G Ultra DMA 66 drive to my ABIT BE6-II’s 1st UltraDMA IDE connector; I then use that drive as a boot drive for Win 98, NT 4.0, 2000 and Linux. I store all my applications on the Striped set and I’m very happy with its performance.

I’d still recommend the FastTrak66. Hopefully Promise can fix the card’s BIOS so that it will report itself correctly to PNP Operating System.

I tried to install the FastTrak66 on an existing drive – I found out that this procedure is NOT easy and the work around MAY work. If not, you must do a complete re-install of the OS.

I am using W98SE and used Promise’s work around – worked great, but only after a lot of trial and error. Here’s what worked for me:

When the second drive is defined, everything on it previously will be lost as its written over to whatever array you define, so make doubly sure that everything works as it should before you do this. There is no guarantee this will work and if not you will wind up doing a fresh install.

Take a look at my HD scores – System specs: 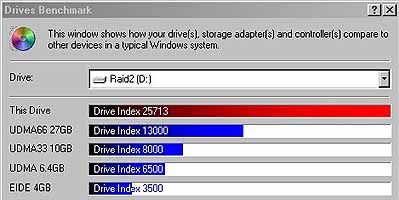 Here is a picture of the HD scores in SiSoft Sandra 2000.

I will not bother to mention the rest of my system, like sound cd burner + etc; 934 MHz is not totally stable because of my ram. However 900MHz is Rock stable.” 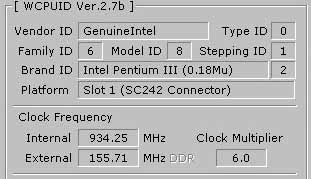 SUMMARY: For less than a dollar, you can convert Promise’s ULTRA 66 DMA card into their FASTRAK 66 Raid Controller, saving about $40 in the process. Pretty good return for 10 minutes work.

In the best overclocking tradition, this hack promises to be one of the all time greats. What is stunning to me is that Promise changes a small part on one card with a retail cost of about $30 and changes it to a card costing about $70. In a sort of internet poetic justice, an enterprising German fellow sniffs this out and tells the world how to change the ugly duckling ULTRA 66 card into a higher priced FASTRAK 66 Raid card with a resistor costing much less than one dollar.

I’m not going to go into detail on how to do the BIOS change etc. Here are two links that explain in full detail how to do it and what to expect:

Before and After Benchmarks.
Detailed How-To.

I did this and thought that some detail on soldering would be of benefit to anyone considering doing this. In the How-To, references are made to two techniques – one where you solder on the leg of the BIOS chip (not a good idea) and one using PIN 23 on the back of the card (much better idea). Soldering on the front side can cook the BIOS chip if you’re not careful; discretion says use the back side.

As the pic below shows, the hack is really simple: Find PIN 23 as indicated and solder a ¼ watt 100 ohm resistor to it and a ground connection. Rather than use the pads under the card connector, I think it is much easier to locate the little hole that goes through the card and solder the resistor lead on the front side. 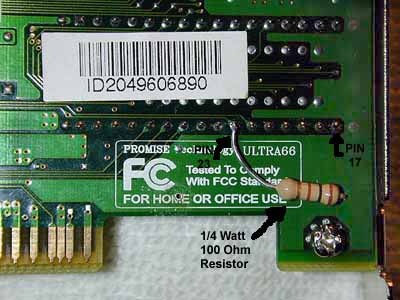 The pic below shows this in detail. Measure the resistor leads and clip to fit. Tin one lead. Tinning means you heat up one lead and put a small amount of solder on the end of the lead – not a big glob, but just enough so you can see solder on it. Push the un-tinned lead through the hole and bend over the lead as shown in the inset picture. The solder this lead to the front of the card – this is the ground lead. 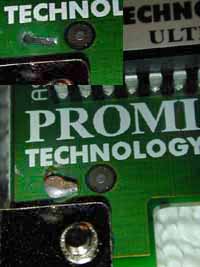 Next bend the tinned lead so that it touches the edge of PIN 23. By soldering the ground lead, you have anchored the resistor so you can place it against the lead and solder without having three hands to hold everything in place. All you have to do is heat up the PIN enough for the solder to flow and the lead is then securely in place. There is no real danger of frying the BIOS chip this way.

Use a small soldering iron – I used a cheapo 30 watt; it’s all you really need. You don’t need great gobs of solder to hold things in place on the rear pin – if you use too much there is a danger of soldering two leads together and then you have to de-solder etc. And that’s it! You now have a $70 Raid Controller for $30.

Warning! Make any modifications at your own risk. By making this modification you void your warranty and could cause damage to your other components.

All Trademarks and Copyrights are property of their respective owners.

Venice and the Internet

SUMMARY: Much better than dial-up and worth paying! The Internet Point I used – I stitched this pic together with Photoshop – the gondola is a bit off. As much as I love Venice, one of the things that drives

More today, even more tomorrow. Something to keep in mind when looking at these is that usefulness often begins in the mind of the user. Gaming The most useful computer accessory I have is a TrackIR 4. I’m a flight