After two weeks of anticipation the new Abit KT7 board arrived and I was definitely looking forward to seeing just what AMD’s latest offering could deliver when mounted on Abit’s magic board. I’ve been building and modifying systems from the days of the original TRS-80, and would definitely considered a ‘Pro’ by my friends and peers. Having heard the horror stories of others killing their Durons (and Thunderbirds) while attempting to mount their heat sink, I knew very well to be extra careful.

Well imagine my surprise when while gently tightening the wing nuts on 2CoolComputer’s water block when I hear ‘CRUNCH’! I think my heart actually stopped for a full second as I knew at once the sound could have only come from one source – the CPU core itself. Removing the water jacket revealed just how correct my first impression was. Below is what my little Duron 600 had been reduced to. 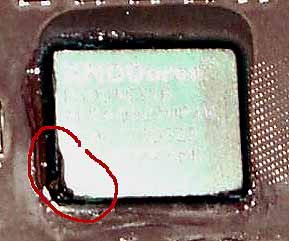 As you can see, the lower corners (especially on the left) were well crushed by the force applied by the mounting device accompanying the water jacket (Damn wing nuts! – Just couldn’t tell just how much pressure was being applied). The only redeeming thing about this incident was that I had only destroyed a $66.00 Duron and not a $250+ Thunderbird.

The accidental cracking of the core had my mind going on just how I could prevent repeating this on the replacement chip. While removing the KT7 from the case and placing the KA7 back in its place, I started staring at the ‘Thermal Plate’ which comes standard on the Slot-A CPU. The actual Slot-A CPU is assembled in much the same manner as the Socket-A units, just no thermal plate to protect it from rough handling. The obvious question came to mind:

‘Why not devise a protective plate for the Socket-A CPU?’

Well, after careful consideration for three days, I decided to attach a copper plate to the replacement CPU before mounting it. I’ve seen several heat sinks with copper inlay which have proven themselves very efficient coolers. The copper would spread out the heat over its entire length, thus improving the thermal interface between the CPU and the water jacket.

In addition, copper is a fairly soft metal, easily cut and ground to the desired shape and size. (Lets face it, have you ever tried to cut an aluminum heat sink? The saw blade constantly clogs up with the filings and its not exactly fast going!) 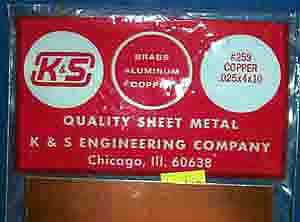 After a trip to various stores, I found a nearly perfect product at the local hobby and craft shop. K&S Engineering makes perfectly flat, smooth, and polished sheet metal plates in a variety of sizes and thickness. I picked up a 4×10 inch piece of .025 thick copper at a cost of $4.10. It’s not the thickest stuff I’ve ever seen, but it’s just thick enough to keep from being easily distorted. Using a hand-held hacksaw blade, I cut off a 1.8″ x 1.8″ square of copper from the sheet. After careful filing of the cut edges, the unit was prepared for mounting to the CPU.

NOTE: Do NOT proceed unless you are certain the L1 Bridges are properly connected if you plan to overclock your CPU! This modification, besides VOIDING your warranty, will result in preventing any future modification of the L1 Bridges!

Place the CPU sandwich into a small wood vise and gentle apply pressure until the epoxy has a chance to cure. Notice that you need to equalize the pressure along the entire length of the copper plate. I used an old heat sink to spread out the pressure. After allowing the epoxy to cure overnight, the CPU was ready for installation into the Abit already remounted into my case. Below is what my setup looked like. 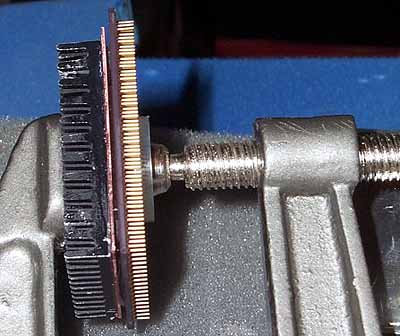 The CPU has been in use for four days now and runs extremely stable at 981 MHz (1.85 volts) on the Abit (The system actually boots at 1 Gig; however, stability isn’t 100% – still working on it!). With an ambient room temperature of 29.5C and case temp of 31C, the CPU is showing 36C after several passes of 3D-Mark 2000 preceded by a couple of hours of Quake III (The CPU sensor on the Abit was adjusted to require a certain amount of effort or pressure to fully seat the CPU, thus ensuring solid contact between the sensor and the CPU case).

My cooling consists of a 2Cool-Computers aluminum block matched to a Aqua-Stealth radiator and pump; however, I’ve replaced the noisy fan which comes with the Aqua-Stealth with a quieter Delta-Electronics unit which is slightly less powerful at 73cfm (For those interested, the Aqua-Stealth block was not used due to its inability to clear the KT7’s capacitors. My unit does not have the 90° elbows necessary to fit the KT7).

Below is a picture of the mounted CPU on my KT7. You’ll notice I chose a rather unique way of mounting things using the four holes found on all of the Socket-A boards (this is an AMD Socket A spec). 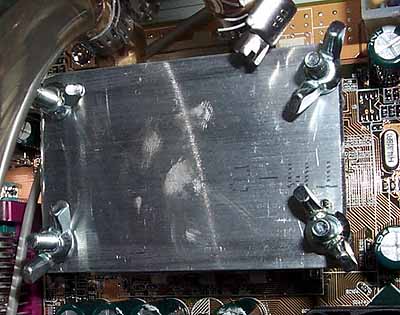 In all honesty, I cannot be certain the temperatures I’m seeing on my board are related to the fabricated ‘thermal plate’, the ‘Arctic Silver’, or a combination of both. The recorded temperatures are, however, much lower than I’ve seen posted by several others in various forums and newsgroups, and I will definitely be modifying any future Socket-A processors in much the same manner, unless of course AMD does in fact change their chips to prevent overclocking. In that case, this may be the last AMD chip I buy for myself or anyone else!

NOTE: I mentioned to Ray that the copper he used is on the thin side and might bend. If possible, using a thicker copper plate would avoid this potential problem – see page 2 for results with the thicker plate. Remember also that adding a copper plate will require adjustment to any heatsink clip you are using. – Joe.

Once my initial article went up, Joe and I had corresponded about perhaps a thicker plate might aid in cooling the CPU better than the rather thin material which was initially used. I had originally planned to use 1/8″ thick material but was unable to find any material in that thickness locally. Joe was able to locate some 1/8″ thick stock from onlinemetals.com and was kind enough to provide me with one of the ten plates he ordered from them. (Thanks again Joe!) 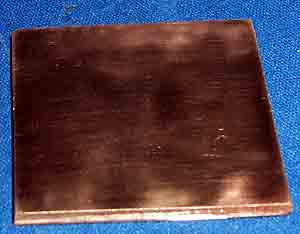 With the circulating rumors of AMD neutering most of the over-clocking abilities of the Duron/Thunderbird siblings, I had already ordered a second or spare CPU. Even if the 2nd CPU isn’t needed anytime soon, I’m ready for one of those dual SMP boards on the horizon for later this year. 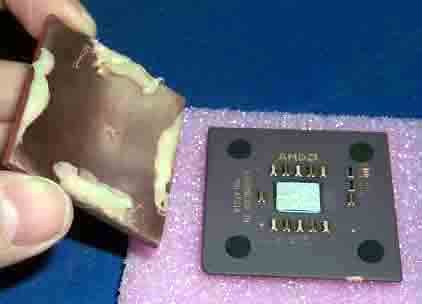 I prepared the furnished slug for mounting on the CPU by first sanding with #120 sandpaper, then with #240, and finally with #400 paper. Once sanded on both sides, I grabbed my dremel and proceeded to polish the slug with automobile grade polish. The CPU core was then coated with Arctic Silver thermal grease and the edges of the copper lined with plastic epoxy. 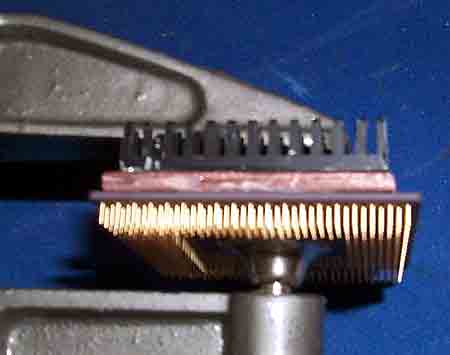 Warning: If you haven’t yet connected the L1 bridges on your Duron/Thunderbird, do so now before joining the plate to the CPU! I’ve personally had to ‘refresh’ the pencil marks on my first modified Duron 2 days after writing the article. (It wasn’t any fun using the dremel to remove enough of the copper plate to access the L1 bridges!).

I would highly recommend using something more permanent than a pencil to unlock your CPU before proceeding. I’ve found that the rear window defroster repair paint sold in most auto parts stores works quite well, and may be removed with acetone should the need arise.

Once the epoxy was fully cured, I mounted the 2nd CPU into the same KT7 setup as was used in my original article. The system was booted into Windows 98SE and the 3D-Mark 2000 demo run looping for around an hour, followed by Prime in an effort to heat up the CPU.

My first impression was that both the thin plate and the heavier plate seemed to give similar results in the cooling department. I was measuring 34C for the 1/8″ plate and 35C with the thinner plate, however ambient room temperature was recorded 1C higher during the testing of the thinner plate.

During testing, I set the speed on both CPUs to 850 MHz, and cranked the core voltage up to the full 1.85 volts to help generate as much heat as possible. (850 MHz was the highest speed in which both CPUs were willing to run stably). Keep in mind that these results were obtained using water cooling with an aluminum water block, and that an air-cooled setup may yield slightly different results.

While there didn’t seem to be much of a difference between using the thicker 1/8″ plate verses the much thinner .025 material initially, there was one notable difference in the behavior of the CPUs. The temperature of the CPU with the thicker 1/8″ plate seemed to be a bit steadier, and wasn’t as affected by small increases in CPU utilization for brief periods of time.

When 3D-Mark was loaded and run for a single pass through the benchmark, the CPU equipped with the thinner plate quickly jumped 2C during the test and then came back down within 30-60 seconds of returning to idle at the desktop, however the temperature of the CPU equipped with the thicker plate would rise and fall more slowly. The thicker copper plate seems to provide a buffer or reservoir, which helps maintain an over all more constant core temperature.

For those contemplating modifying their Duron or Thunderbird with a copper cap, the thicker material may well be worth the extra trouble of obtaining it as the payoff is a more constant temperature under normal usage.

Intel Down, Spam Down Even More

Things are getting rough out there. Even spam took a huge hit.