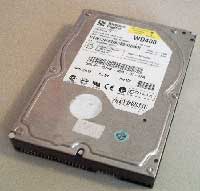 . . . for two years now and I can no longer tolerate the noise it produces. I have tried all sorts of remedies, including stuffing a ridiculous amount of Styrofoam and polyurethane foam into my case, to deaden its high-pitched whine.

When I took the drive out of its standard mounting and held it in my hand, I found that the airborne sound directly from the drive was minimal compared to the sound that was being amplified by the metal in my computer case.

Given the small size and layout of my case; I couldn’t really make a wooden frame with bungee cords.

Given that my budget had to be as low as possible, I wasn’t about to buy one of those foam lined aluminum boxes, or metal cages with rubber bands for suspension for $50.00 U.S.

Given I didn’t want to increase my hard drive temperatures, a foam-lined aluminum box wasn’t the answer.

This is where I thought the United States Post Office could help me out. I went to mail something, and took a look at the Priority Mail packaging. I found a cardboard box that, when assembled, was the same size as a CD-Rom drive. Unfortunately, I could not legally obtain a box unless I used it to mail something (they’re free and considered part of the Priority Mail fee).

Alas, I ended up building my own box. Hot glue, 1/16″ thick cardboard and translucent cellophane tape were used. The dimensions on the box were established so that the size of the box matched the size of a CD-Rom drive in height, and width, but was an inch longer than the hard drive.

I started thinking about various ways I could cram this box full of Styrofoam foam and paper-backed bubble wrap. Here’s two section views of what I decided to do:

The original design calls for airflow over the top of the drive. Since the drive’s motor is located on the bottom of the drive, it would make sense to have the airflow going under the drive, cooling the most vital part.

I did some testing and found that, in my situation, there is only a minor difference between the temperature of the drive in the two positions. I decided to construct it with the airflow going under the hard drive.

I built the box and prepared the foam which will be used later to secure everything inside. On the opposite end I cut a square hole so I could mount the small computer fan. I gathered up some foam and bubble wrap that has a paper backing and cut it to size for the box: 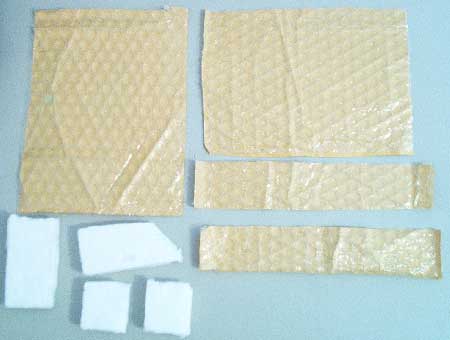 Here’s the box after construction and with a coat of silver spray paint: 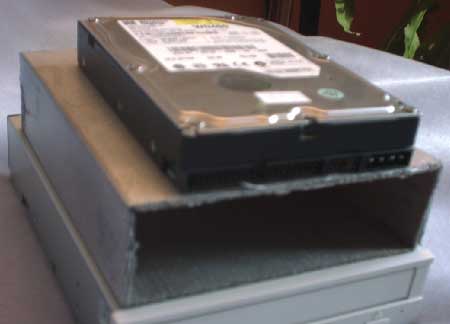 The next step is to add the two smallest pieces of foam, and the bubble wrap to the box. The two pieces of foam sit against the back end of the enclosure:

I mounted the fan to a piece of cardboard. I cut a hole in the cardboard then I squirted hot glue inside the holes on the fan frame to mount it to the cardboard:

Then I attached the fan assembly to the box on the end that has the square hole . . . 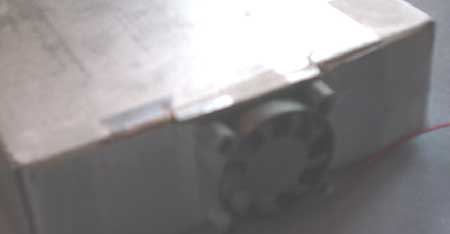 …and then I inserted the hard drive, and the four remaining pieces of Styrofoam. Two pieces hold the drive vertically, and the other two hold it horizontally:

And that, ladies and gentlemen, is all there is for the assembly.

All you need to do now is slide the enclosure into an open 5″ drive bay, hook up the power and data for the HDD, and provide the fan with some electricity. Here is the front of my case with the bezel removed: 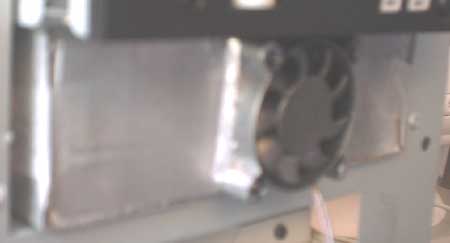 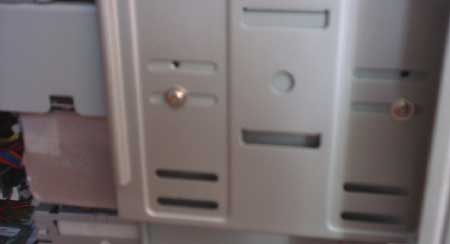 For around $7.00 U.S., I have an enclosure that keeps the hard drive noise to a minimum while ensuring it stays at normal operating temperature.

The annoying whine of the drive is now inaudible, and now the drive is only audible while it is reading/writing. When it’s doing that, it only produces a very low frequency noise, which sounds muffled, and is definitely not distracting.

All of my case fans are normally run @ 7V using a fan bus and the loudest part of my computer is the power supply fan. I haven’t done any tests of the decibel level

Matrox introduced the G550 today. Not exactly noteworthy for a largely gamer audience, except for a bizarre videoconferencing feature called Headcasting. Here’s how it works: You get a 3D picture made of your head. You find another fool with a

It Must Be The Shoes?

There’s a couple benchmarks from one of these dual video card systems that we first mentioned about a month ago. Prices will start at $5,000+. This is not chump change. Questions I’d like to ask the rabid gamers out there