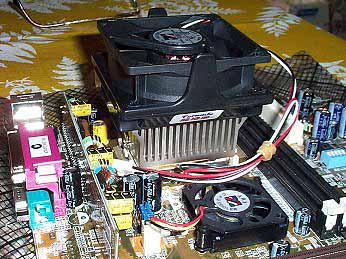 I grabbed 2 35 cfm fans (ball bearing types) for about AU$10 each from the local PC dealer, but when I looked at the case I found I was going to have a problem.

Most fans are rated at a specific CFM with no suction or discharge
restriction, but my full tower ProLine case was typical, in that it had a
perforated fan mounting area. These look nice but probably cut the
effective area that the fan can use by 50% or more, so out came the nibbler.

One fan was mounted in the front of the case (Note the picture below is of a test fan I was using, and was replaced prior to installation of the
motherboard). 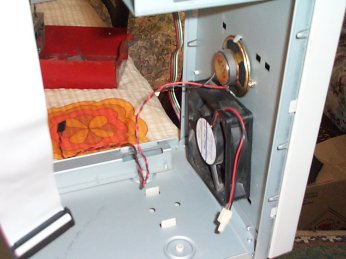 Then I noticed that the interior of the front panel did not allow a lot of
air in – what it did was suck through the exterior of the case around the
edge of the plastic front, and also recirculate a lot of air from inside the case via the floppy, HDD & 5.25 bay openings.

I got a small amount of foam sealing tape with a sticky side, like you use for sealing drafts in doors of your house, and made a nice barrier above the fan, between the case and the plastic front. This forced any air to be sucked from below the fan. Since there was no air holes there, out came the Arlec Supertool and some plastic was removed. Since this is right at ground level, you do not notice it at all. 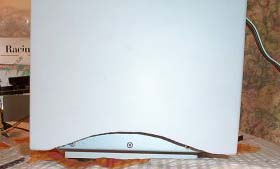 The top of this case has a section to mount the floppy drive at the front
top, and a HDD at the rear. A small vent hole lets air out, but is too small to mount a fan, so my HDD was mounted down in the bottom of the case.

During testing, I noticed that air was being drawn in through this vent and exhausted by the top exhaust fan. Sucking in cool air here did nothing but waste capacity of this fan, so I taped up the top section with duct tape so that all the air exhausted by the rear fan was from below it – the hot area! 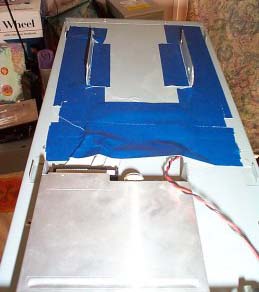 The nibbler was used to remove the excess steel from the exhaust fan at the rear, and I also made a hole that was used to mount an old Pentium cooling fan in the rear case. This extra hole is located about 2 inches from the CPU cooler when the motherboard is installed. This was initially used to blow cool air into the case, but better temperatures were noticed when it was reversed, exhausting hot air out of the case. 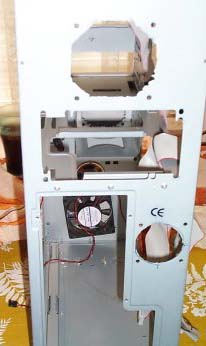 When I put all the case fans back in & powered up the system I was shocked – it was noisy! Then I realized that the fans were quiet when removed from the case, but the fans’ vibrations were being amplified when they were solidly mounted. I was stumped.

I left it like that for a while. Then one day, I saw a 20 meter roll of odd looking tubing. It’s hard to describe the shape but it is a square tube with a B on the end. See the picture below for an idea of the shape: 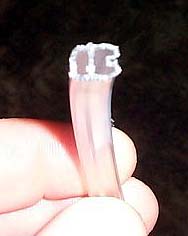 The tubing was perfect to put round the edges of the fan holes. The tubing
allowed the fans to sit about a millimeter away from the case. When you add the nylon bolts, it reduced the fan-case noise to barely a whisper.

My Athlon’s case sits about 2C above ambient temperature of 22C, and under no load, CPU temp is 38C; under load, about 48-50C (Using [email protected] for 8 hours). I expect to gain a few degrees when I replace the CPU cooler with a better brand, but $s are tight at the moment, and this is a nice, cheap and quiet alternative to mounting a fan driven by a jet engine in your case.

A Thought About Water Cooling

Some musings from one of our readers – M. C. Misiolek


Performance for Pennies (Or not, as the case may be)