The PC’s power supply is one source of noise due to the fan used for cooling. As you start to dampen noise, especially with water cooling, all of a sudden, noise from the power supply becomes more noticeable and possibly objectionable.

Silicon Acoustics is a new face on the scene, specializing in hard to find noise reduction products.

Zalman is the company that specializes in quiet products – the Zalman Flower is a good example of a low noise (but low performance) heatsink.

I decided to test these two against a “run of the mill” power supply; I rooted around and found a Sparkle FSP300-60GT¹ to throw into the mix. Each power supply is an ATX rated at 300 watts. Below is a listing of specs for each line:

The Enermax and Zalman are fairly close in specs, while the Sparkle falls short in almost all categories – not unexpected considering it’s a “price” PS.

Cooling is a key component as it affects performance. Trading off fan noise directly impacts cooling performance – less air flow, more heat. To deal with it, the PS has to increase heatsink surface area to compensate for reduced airflow (hence noise). To see how each of these stacks up, I opened each one to check out the heatsink size: 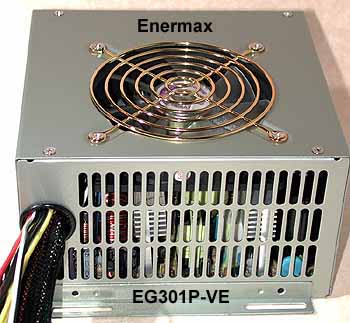 Nice venting on the Enermax – It has two fans, one at the rear and one in the bottom. The second fan should be a big plus when it comes to cooling. At low speeds, having large vent holes is a good thing. 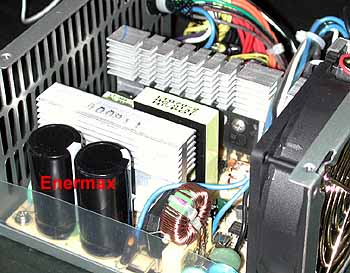 The heatsinks in the Enermax are not as large as the Zalman; however, with a second fan directing air on it, airflow over the heatsink should be fairly effective.

The Enermax has a knob at the back which allows users to vary fan speed from about 1900 to 3000 rpm. I tested it at its lowest fan setting. 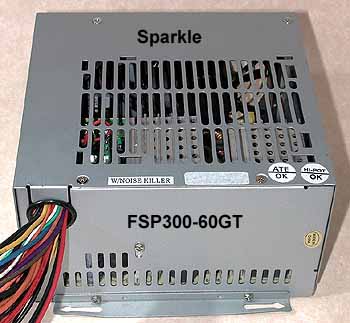 The Sparkle also has good venting which allows a fair amount of air to flow into the power supply. 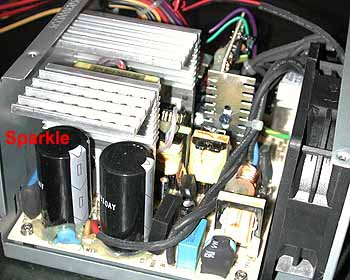 The heatsinks are interesting – they are tall and have holes in the top. I am guessing that the design accommodates airflow both from the fan and as it enters through the vent holes – a good design. 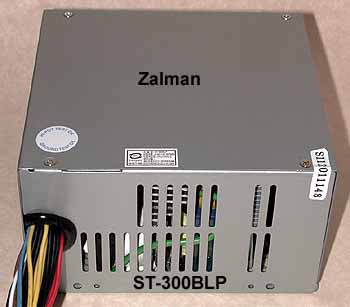 The vent holes in the Zalman are puny compared to the others; frankly, this surprised me. For a PS that is designed to be quiet, I would think that maximizing heatsink surface area and airflow would go hand-in-hand.

The Zalman was by far the heaviest, tipping the scales at almost 5 pounds, compared to about 3½ for the others. 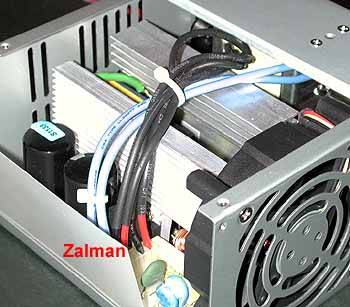 While you can see here is that although the Zalman’s heatsink is probably the largest of the three, airflow is restricted such that its efficiency may be compromised. The specs state that the fan varies speed based on the heat load – I did not see any variation as I used it, although ambient temps were about 20C. In a warm case, the fan may speed up.

Let’s take each one for a spin and see how they stack up:

To measure noise, I used a Radio Shack sound meter and found the distance at which it would register 50 dBA, its minimum. I measured noise by running each power supply in a quiet room – only the power supply’s fan was running.

I measured temps at two points – one thermocouple at the fan exit, and one at the intake vents. I ran Prime 95 for about 30 minutes to warm up each power supply and then measured intake and outlet temps. Shown in the table is the difference between the two.

I recorded voltages using Motherboard Monitor and, when measuring temps, I also recorded voltage variations; the ranges shown were over about a five minute period with Prime 95 running.

As to noise, the Zalman was virtually silent. In a quiet room, you can barely hear it running three feet away; hooked up to a PC with one other fan running, you can not hear it. The Enermax was a close second (at LOW; at high, it’s about the same as the Sparkle), followed by the Sparkle. Of the three, either the Enermax or Zalman will not contribute noise to a system with at least one other fan (e.g., heatsink) running.

The fans of both the Enermax and Zalman were barely ticking over, as you can see from the rpms. The Sparkle has no PS fan wire, but I think it was hitting about 3000 rpm.

What you also see from the Sparkle is less than sparkling performance – compared to the others, it put out less voltage. I found that I had more Prime 95 failures with the Sparkle than the others.

There was not much performance difference between the Enermax and the Zalman, although the Zalman shows somewhat less voltage variation. There was a clear difference in cooling. The Zalman clearly suffers from inadequate venting compared to the others – its temp rise is almost triple the others. Considering the small intake vents, this is not all that surprising.

If I had the Zalman in a system, I would punch more vent holes in the cover.

Either the Zalman or Enermax will deliver good performance at very low noise levels, with maybe a slight edge to the Enermax, considering temps and slightly higher voltage levels. I would not go with less than 350 watts for overclocked AMD based systems, however, and not less than 300 watts for PIVs.

Thanks again to Directron and Silicon Acoustics for sending these our way.

¹Some folks emailed me that the Sparkle PS is an old one (true) and that I may have done them disservice by including it, which I DON’T want to do. For example, Michael wrote:

And Brian sent me a link to a newer model’s specs, further stating that

“…Sparkles are considered longer-lasting, more reliable and better engineered units than Enermax and Antec, albiet much more noisy. Unfortunately I do not have hard data to back up such claims. Therefore they are a combination of speculation and experience.”

Please read what I wrote keeping these comments in mind, and as always, I’ll be more than happy to test out any other units that come our way.

You Just Keep Me Hangin’ On

AMD is breaking ground on its Dresden II fab today, and The Inquirer is there gathering up some tidbits here and there. For us, this quote from the first article is most important: “Like Intel, AMD said that new microprocessors

Mark emailed me about adding an Overclockers.com icon file so that instead of seeing a generic icon, one specific to the site appears in bookmarks. I ginned one up quickly, but there is so much creative talent in our audience

Multi Processing For All

As dual core processors become affordable, many will be tempted to enter this brave new world. I’ll spare you the typical marketing hype and hopefully shed some light on some of the technical details that will be ultimately more useful