A SECOND LOOK, AFTER SOME CUTTING.

When I finished up my initial Raidmax Scorpio 868W case review a few days ago, I mentioned that airflow could be improved by removing the stamped in “cheese grater” fan openings that are used in this case’s design.

I cut out these openings, as mentioned, and these are my results.

I started out by stripping the chassis bare to get ready for the cutting work. Removing everything ensures no debris from cutting will wind up lodged somewhere where it will cause a short and fry anything. Once the chassis was bare, I used the tools from my Heatsinks and Window Mod articles (air powered automotive tools) to cut out the holes for the fans. 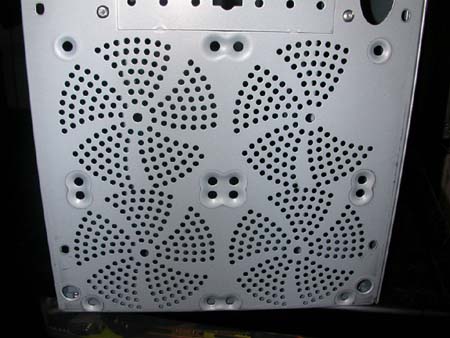 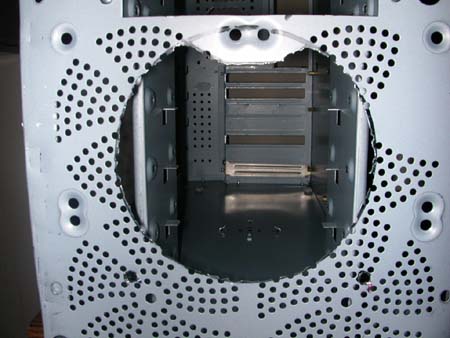 While this case has mounts for four 80mm fans, I noticed that the design of the front bezel would block off a fair amount of the air to them. I opted to use a
single high CFM 120mm fan instead, centered directly in front of the opening in the front bezel.

I cut the opening out in a way, however, that would allow me to still
mount the quartet of 80mm fans if I wanted. Each 80mm fan would still be able to use three of the four mounts, and the center of the four fans could be tied together
for stability. 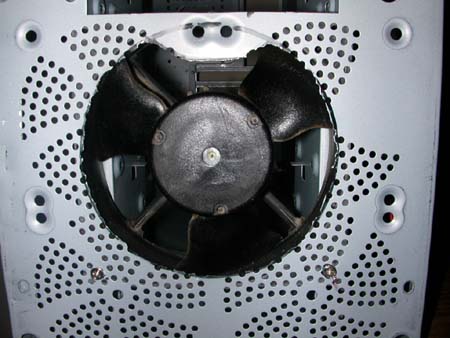 AFTER, with the 120mm fan installed

Mounting some form of filter in front of this fan might be a good idea, where it’s got such a straight shot through the front panel into the case. While this will
again reduce airflow, it wouldn’t reduce it as much as the metal openings I just cut out. I didn’t install any filter when I put the machine back together, but I know
I’m going to be in and out of the case frequently, and swapping parts often, as this machine will be a “test bed” of sorts for future product reviews. So I’m fully
prepared to do some dusting as time goes by.

Let’s look at the rear (exhaust) side next….

AND THE BACK SIDE… 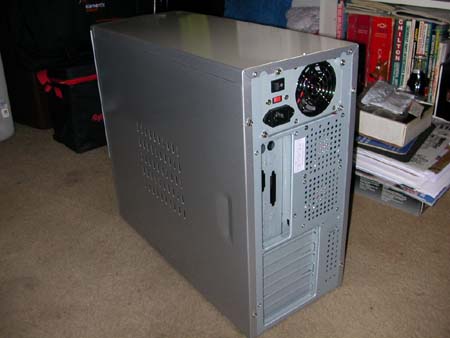 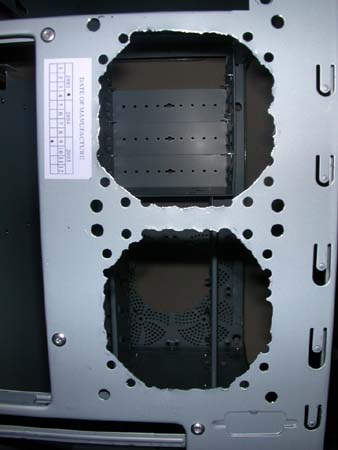 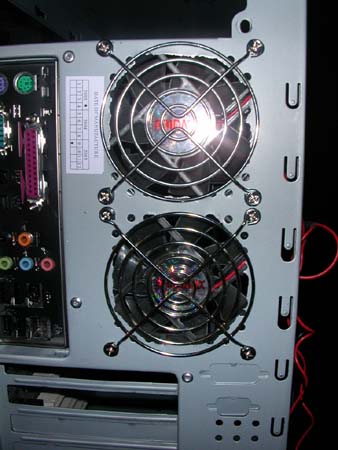 AFTER, with the two 80mm fans installed

Now, I know these holes here look like ca-ca, but they suffice for the intended project. I plan on going back and finishing those edges with a file later. I was in a bit of a rush trying
to get this done.

The system got put back together exactly as it was before disassembly. All the cables were routed the same as before, to ensure that my “airflow pattern” would be unchanged, in the sense
of internal air movement. The overall airflow pattern has changed quite dramatically however, as well see in a moment.

The system used in this build up is an intel P4 based configuration as follows (just the basics):

No modifications to the board have been done, the Northbridge HSF is the original Abit part.

I noticed that the side panel fan is blowing out, and left it alone for now.
I will reverse it to blow in and see how that effects temperatures (if at all) next. The other two (exhaust) case fans are as they came with the case.

But still, a 47% overclock is nothing to sneeze at. I’m quite impressed by this chip. I’ve a feeling better cooling on the Abit’s Northbridge, and better knowledge on my part of what to do to
really get the full potential out of a P4 system (I haven’t run intel since my P///700E, over two years ago) might get this number even higher.

Like an idiot, I forgot to take a screenshot of my “before” temps. I recall precisely what they were, but it might have been nice to have a pic to post of them.

TEMPS BEFORE CUTTING:
TEMPS AFTER CUTTING:

Now, my Ambient temp is a bit higher than the first set of numbers, by about two (2) degrees Celsius, which skews the numbers below slightly, but still….a picture is worth a thousand words:

I mentioned in the original review that I thought the side panel fan was “weak”. Reversing the air flow direction of it to blow into the case didn’t change the temps at all, up or down.

This just proves that improving the amount of air flow going through your case can directly and significantly affect the temperatures your system operates at. Cutting out the stock grills that
were part of this case directly impacted temps here by 6 to 7C. I’ve yet to try, but I wouldn’t be a bit surprised if 148 or 149 FSB might be stable at 1.65v, now that the temps have been reduced.

A simple thing like this can make a good case great. It certainly did for this case. =)

Once again, I’d like to thank the good folks at Directron for sending this case out for us to review.

Not much difference among top brands – Joe
Read More