The fine folks at Directron
were nice enough to let us take a look at another product they offer, this time a mid-tower ATX format case.

Normally, a product review starts off with a “beauty shot” of the item itself. This however, is no “usual” item, nor is it a “usual” review. We’ll pick up the story right from
the moment this item made it’s appearance….

So, the UPS guy knocks on my door, and leaves this…

As I brought the box into the house, I thought I heard what sounded like a muffled voice coming from within the box. I opened the box up, and found the case was packed quite well for shipping:

Once I had the case out of it’s packaging, and could look it in the eye, I heard the voice again, but this time very clearly… This case just screams “Stuff me full of the hottest hardware
you can get your mitts on and take me to a LAN party!!”

Note: the tape visible on the front panel is for shipping purposes, to protect the panel from damage.

Let’s take a closer look at this case, shall we?

Looking over the items above gives a clear indication of who this case is targeted for….the gamer. Physically, the case is a bit on the smaller side, making it
easily portable. Despite it’s smaller size, it’s got room for seven case fans standard, and more drives than the average motherboard supports. Plenty of cooling, plenty
of storage. And, from a modder’s point of view, plenty of options to work with, to improve upon.

So, without further ado, let’s take a visual stroll around this case, and see what it has to offer. Let’s start right out front: 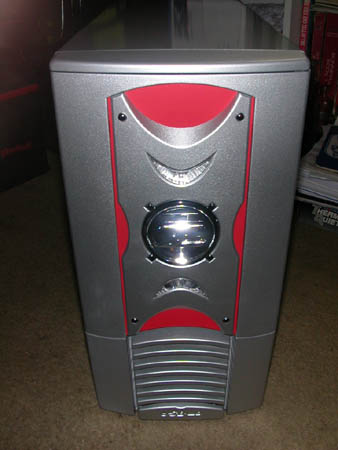 Look familiar? It should. Minor details set it apart from it’s famous relatives however.
No, I didn’t reverse the image. The door opens from the left.

Note the wire loom in the lower corner of the door? We’ll see what that controls further on.

Gamers rejoice!! They’re all built in! =)

Here we see the rear and right sides. Note the additional vent louvers in the right panel. The included power supply, and two of the three case fans can also be seen here. 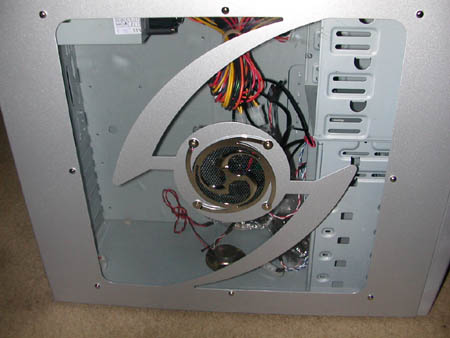 Here we see the highly stylized window treatment this case gets. Behind that chromed grill is also a second mesh type grill. Behind that, is a tri-LED fan, the third included with the case.

Let’s open it up, and see what all that “spaghetti” in there is…. 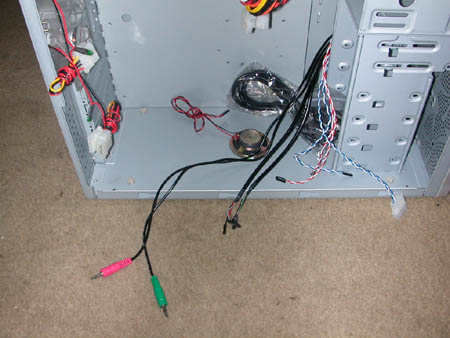 Everything is all ready installed, and just needs to be plugged in to the motherboard you’re using. Clockwise from the top; ATX power cables (just visible), the front panel switch and LED leads
(we’ll come back to these, as they’re a bit unusual), the leads for the two USB 2.0 ports, the leads for the front headphone and mike jacks, and along the left edge of the case are the wires for the two
pre-installed case fans. If you look closely at the wiring of these, you’ll notice they have thermal sensors built in. These two are thermally controlled, the LED fan in the side panel is not, however.

Sitting on the base is the system speaker, and behind it, in two bags, are the power cord for the PSU, and a bag of hardware. Let’s see what’s in that: 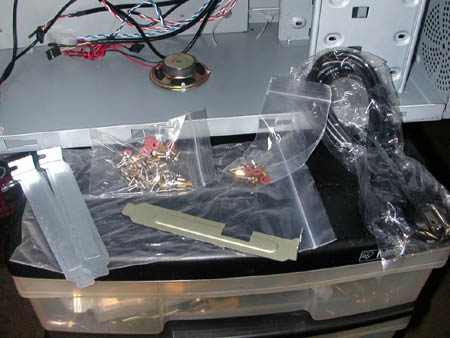 Included is a nice assortment of items: two standard expansion slot plates, one notched slot plate, a handful of screws, both fine and coarse thread, motherboard standoffs,
and the power cord. The notched plate is used for routing the headphone and mike jack leads from the front to the rear I/O panel of your motherboard. There are nine standoffs
included, and more than enough screws with which to mount the board, and several drives. 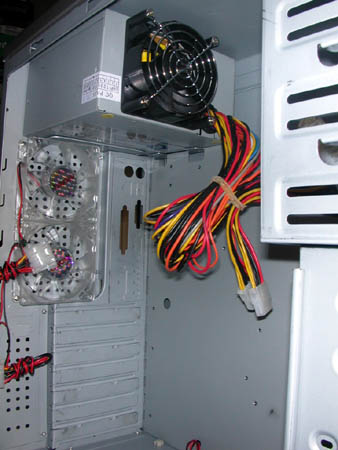 Looking inside the case to the back, we see the power supply and the two installed exhaust fans. The case uses knockouts for the slot covers, something I’ve never really been fond of. If you move cards around
a lot, you may need to get more than the two slot covers provided. The I/O plate is also a “knockout”, so if your motherboard uses a non standard I/O configuration, you can pop this one out,
and use the one that came with your board.

The included power supply is a two fan unit, but places the second fan in the front, rather than the bottom.

The PSU specs…not the best, but adequate.

There’s only four 4 pin Molex connectors in the harnesses of the PSU… Bear this in mind as you plan for fans, lights, drives, etc… You’ll likely need some “Y” adapters, or similar. All three
of the included fans use 4 pin Molex plugs. Fortunately, they all are of the “pass thru” type, so you can daisy chain them together onto one plug lead. 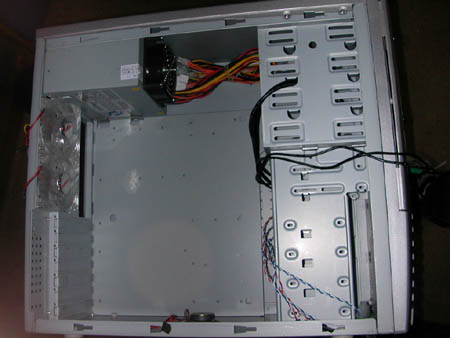 Here’s a good wide shot of the inside of the case. This model doesn’t use drive rails, or cages. Instead there’s a full length rack, with room for ten drives total. This case does however, still
lack a removable motherboard tray. This is a big drawback to a lot of people, but in one aspect, it’s good. More often than not, a fixed motherboard tray like this adds structural integrity to the case,
making is less likely to flex or twist. So, despite it’s relatively small size, this is a fairly stout case. I couldn’t detect any twist or flex as I worked with it. 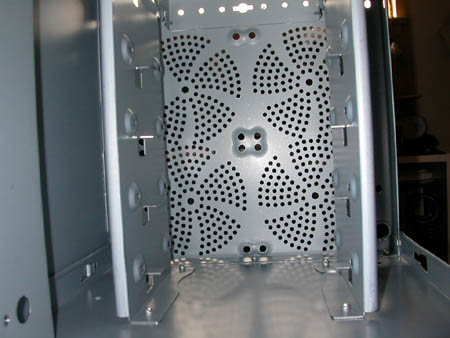 Located directly in front of the drive rack, are openings for four more 80 mm case fans (not included). With the open, louvered front panel, this will allow some decent airflow. Those “cheese grater”
openings can be “worked on” later, for even better airflow…;)

Now that we’ve looked at “the meat and potatoes”, let’s look at the gravy….

{mospagebreak}
I’d like to see something in some lights, please…

Back on page 2, I made note of wiring going into the drive bay door. Those wires are for the power and hard drive LEDs. That big circle with the “Z” in it? THAT’S
the power LED…. Those two “half moons” above and below the “Z”? THOSE are the HDD activity lights. =O

The effect in person is quite amazing. Big, bold lighting. At a LAN party, where you might be accessing your hard drive frequently, loading maps and files for whatever game is being played,
the light show will definitely get attention. The side panel tri-LED fan is bright enough to dimly illuminate the inside of the case. I’d personally like to see it put out more airflow, than any
light at all however…it’s a very weak fan.

The paint and finish of this case is very good. The panels fit on well, and don’t rattle. In fact, the left panel almost fits “too well”. With the full window, there’s no “handle” provision.
Removing the left side panel is a bit tough, as there’s nothing to really hold onto or brace against. The chassis is very well built. I could detect no flex or twist when working on it.

There is one cosmetic issue, that in searching around and reading a couple other reviews, seems to be a trend.
During shipment, the cables inside the case move around a bit, and can scratch the inside of the plexiglass. Covering the window on the inside of the panel for shipment at the manufacturer’s end
would prevent this.

The “pros” definitely outweigh the “cons” however, at least, from where I sit:

All in all, a very nice case. Lots of “flash” to get attention right out of the box, and plenty of room to add your own. And at a reasonable price.

I’d like to thank the good folks at Directron
for sending this case out for us to review.

If this case here isn’t your “cup of tea”, they stock a lot more to choose from… 😉

For those interested… follow me on over to page 6, where I’ll show you a couple ideas on making this case even better, by improving the airflow.

Ahhh….so you decided to have a look, eh? I thought you might. This really is a nice case, that with a bit of work, can be truly great.

The biggest thing this case needs, is to improve airflow. Out of the box, it’s good, with room for seven fans. Four front intakes is really nice, especially in this
small of a case. However, I had a different idea on that, which I’ll get to in a moment.

First, let’s start with the basics….

Here’s the case with the front panel off…

Those “cheese grater” openings over the fans seriously impede airflow. The average 80 mm case fan puts out in the neighborhood of 30 CFM. This type of opening in front of the fan reduces the
amount of airflow drastically. Cutting out these openings can increase the ability of air to move freely considerably. While I haven’t done this to the Raidmax yet, I can show you what I mean
with a pair of pics from the “O/C Tribute Rig” build up: 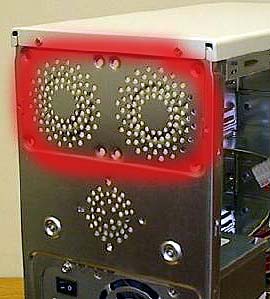 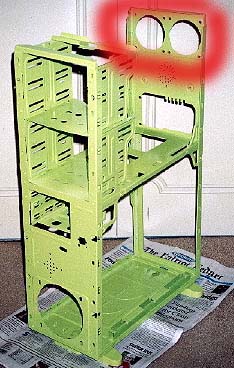 Doing this mod on not only the front four, but the rear two exhaust fan openings, will dramatically improve airflow thru this case. Better airflow means lower temps, which in
turn can possibly net you a better overclock. At the least, help make your machine more stable.

I HAD ONE MORE THOUGHT…..

While I was looking the case over after first getting it, I noticed that, while there’s provision for four intake fans in the lower front, the shape and design of
the front panel (bezel) blocks off almost half of the fans air. While four decent 80 mm fans will provide more than adequate airflow, it’s a shame that so much of it is
blocked, even with cutting out the “cheese grate”. Looking at the size and shape of the louvered section of the front panel gave me an idea…. 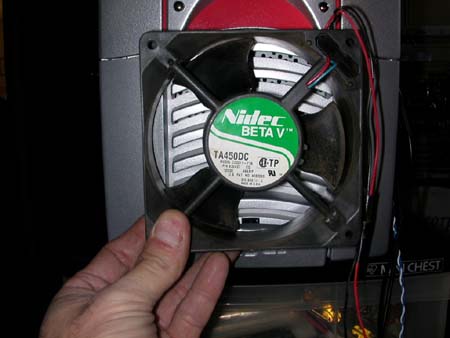 The louvered area of the front panel is just about 120 mm square. What if I… 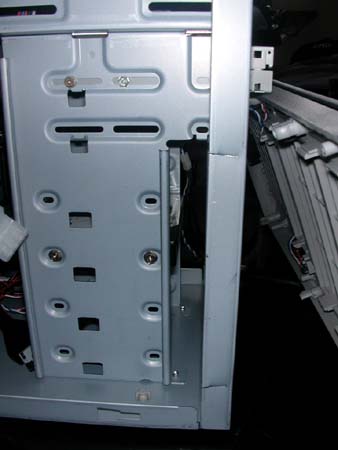 …cut a pair of notches on this edge, and fold the metal back…

Well, with a bit of work, it fits. I had to dimple out the front of the case where the four screw holes are, so the fan would spin, but it works.
Granted, the airflow is still going to be reduced until I can cut an opening in front of the fan, but when I get that done, I’ll have a straight, unimpeded
shot into the case with a pretty high flowing fan.

That’s it for now….’til next time!

A while ago, I was looking for an easy way to upgrade my old system. At that time, I had an old Packard Bell set up with at P233 MMX and only 32 MB of RAM. I spent a long

SUMMARY: Metallic foam structures have interesting properties as a heatsink material. The fan pictured above is 70 mm x 10 mm. I happened to come across a potentially new heatsink material – copper foam. This is derived from a very

In a few hours, I’ll be running off to do the Christmas thing with relatives. Unfortunately, the next couple days will have me acting like one of Santa’s elves: an elf on Santa’s bad side. What will I be doing?