AMD Thinks It Will Make A Profit This Quarter

Given the upsurge in CPU sales the last few months, and an additional boost due to initial desktop Hammer sales, this would hardly be surprising, as we’ve indicated a few times in the last couple months.

90nm Hammers To Be Delayed A Little

A matter of rather greater concern to this audience is when the second generation of Hammers is due out. A roadmap from x86-secrets.com shows the schedule for 90nm Hammers has slipped from the first half of 2004 to the second half of 2004, and AMD confirmed a delay in their recent analyst meeting.

However, the comments at the analyst meeting seemed to indicate initial 90nm production shipments of what we know now as FXs late next summer, with other models to follow.

This trend is reinforced by the introduction of new 130nm processors in the second quarter of 2004. Unless AMD plans to introduce these, then introduce 90nm versions almost immediately, it’s probably safe to say that there will be a significant amount of time between the two events.

That may be a good thing. If you think you’re confused now, wait until next year.

Too Many Plums In The Pudding…

Trying To Make Sense of It All… 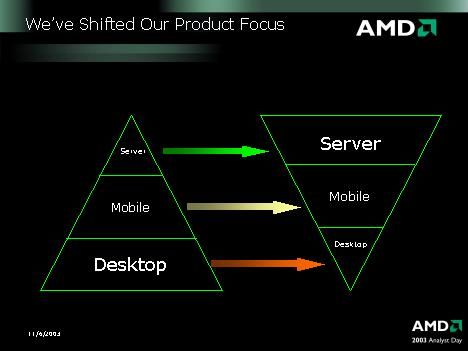 It shows two pyramids. The first pyramid shows AMD’s earlier focus, with the base being the desktop, with mobile and server sales being addons. This makes a great deal of sense since desktop processor sales are AMD’s daily bread, while the others are butter. Intel certainly knows that.

The second pyramid shows the new “improved” AMD focus, with an inverted triangle showing servers as being the top priority and the desktop being given lowest priority.

This is the kind of mindset that killed IBM’s chances of monopolizing the desktop. You can try to get more butter on the bread, but you can’t just make butter. If you do, you’ll starve to death from lack of nutrients.

The server market isn’t and never will be big enough to pay the fab bills, and it will be years before AMD can hope to be a major player in the server market (which is only about 5% of the desktop market). (Mobile could well eventually replace desktop as the main man, but not for a while yet.)

In the meantime, you can’t cripple your desktop offerings (either feature or price-wise) to protect your higher-end server offerings. That will get you an inverted pyramid, alright.

Have you ever tried to keep an inverted pyramid standing up?

If you’ve wondered why I’ve been so down on AMD, even after they managed to get Hammer right, this is the core reason. The players now look good enough. The coaches and gameplan don’t.

More Delays Look for yourself. Please note that “order availability date” means when a distributor can order the product, not when you can get it. As a connoisseur of AMD misdirection and misinformation, I sort of liked AMD “cancelling” two

System Mods – No One Can Eat (do) Just One