SUMMARY: Folded fin heatsinks will become more common and displace more expensive aluminum extrusion units as they are cheaper and perform better. The RDJD K601 is the price/performance alternative to the Alpha 6035 – a little less performance for a lot less price. 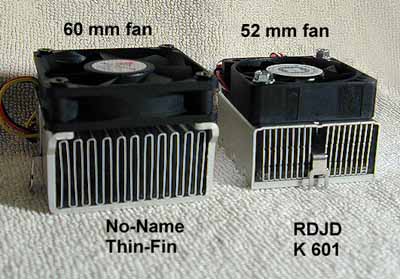 Ever since I picked up the No-name thin-fin heatsink at a computer show, I have been trying to find out what company makes these with no luck. However, RL Pierce emailed me with the URL of a company which makes a similar unit – RDJD. This is the company which makes what I tested as the best “Intel approved” PIII heatsink on the market – their P301 (HERE)..

Folded fin heatsinks are very efficient for their size and weight – this is due to the large fin surface area. The K601 packs 66 square inches in its small package, while the No-Name packs an astounding 165 square inches into its package. Interestingly, the K601 outperforms the No-Name. I think it’s because the No-Name allows air to escape off the top of the fins whereas the K601 does not.

I mounted the Alpha, No-Name and K601 on a slotket in my ABIT BX6-2. The following table lists thermal diode temps for my C366 @ 550 while running Prime 95. For this test, I let temps stabilize and then I ran Motherboard Monitor for 5 minutes, taking temp readings at 1 second intervals. Motherboard Monitor records the lowest temp, highest temp and average – in this case the average of 300 readings. 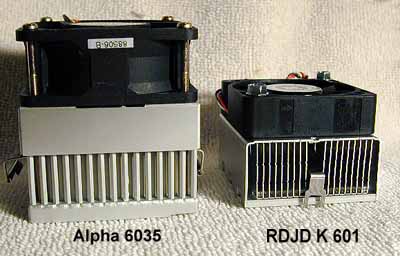 The Alpha is a clear winner but not by a lot. The No-Name comes close but only using the YS Tech 26 cfm fan. The K601 is 1.7 C worse than the Alpha with its 17.5 cfm 52 mm fan. The 2 C temp difference is incredibly close considering the Alpha’s size in relation to the K601 and No-Name. I think Alpha and others are going to face incredibly stiff competition from folded fine units to our benefit – expect prices to come down markedly and performance to go up.

Tweaking the K601 is more difficult than the No-Name due to its 52 mm fan; You can replace the No-Name’s 60 x 15 mm fan with a YS Tech, but not so for the K601. I’ve been thinking of some kind of ducting arrangement for the K601 to use a higher cfm fan, but this starts to get into a lot of work for not so much gain. Hopefully RDJD will upgrade this unit to a 60 mm fan and this will open more possibilities.

In the meantime, the RDJD is a very credible alternative to the Alpha, especially for Coppermines (less demanding re heat). Its compact size makes it perfect for the “space-challenged” motherboards on the market and hopefully we will see more performance oriented versions of these units shortly.

NOTE: Alpha is coming out with a new version of the socket 7 unit and we will be reporting on it as soon as we get it.

The boys from TENNMAX kindly sent me one of their new P3STF Pentium III heatsink and fan combos to look at. This is basically the P3TF with larger fans. The P3TF, as reviewed on other sites, was a fairly good

SUMMARY: Swiftech’s MCW372-B, featuring one of the easiest mounting systems around, proves to be a capable performer. Measurements: 2″ x 2 ½” x 2 ½” high Swiftech has a new look for its Socket A/370 waterblock – it now sports