Flailboy, one our members, approached me with a request to revive his dead motherboard. Having performed surgery on several motherboards before, I was running through the possibilities on what might have gone wrong. The usual suspect is the infamous “bad caps” phenomenon, where the electrolytic capacitors on a motherboard fail catastrophically. Analyzing modes of failure would entail an article in itself and so we will limit ourselves to a visual after the fact.

The board arrived and this is what I saw: 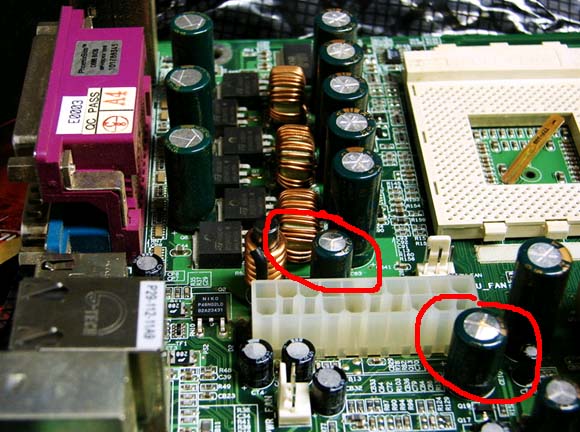 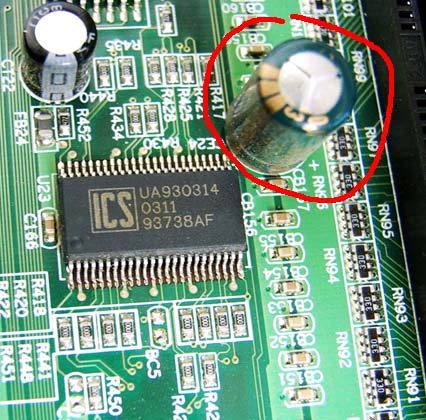 The board was filled with capacitors leaking their electrolytes (henceforth referred to as bad caps). Note that the caps that decouple VDIMM, near the chipset, near the AGP connector and the ones near the ATX connector were completely decimated. The bad caps are circled in red. 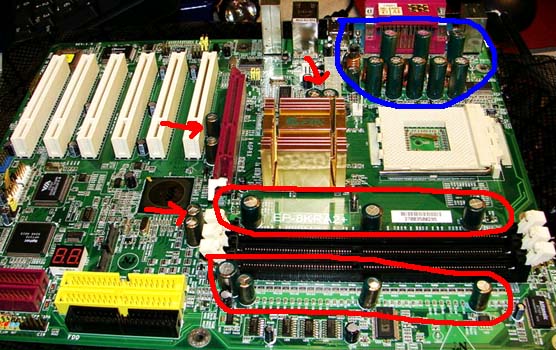 Now that we have seen how bad the situation is, I’ll list out the capacitors on this board with reference to the above picture:

Of the lot, only Sanyo has a good reputation in the tech community. There have been a few reports of dodgy Teapos before, but I have not heard any recent reports of failure. I’d mark Teapo as an average brand. GSCs, on the other hand, are clearly crap. After seeing many boards with dead GSC’s, I’m not too surprised.

So the task is clear cut it seems – replace the dead capacitors and the job is done! Is it that simple? The answer is a Yes and a No. Replacing capacitors can be done with a bit of practice, but the more important issue is to understand what the replacements need to be.

There are two ways to go about this process and I’ll try to explain both techniques. Note that everything in this article is based on my experience and ideas gleaned from reading technical documentation. I am not a power electronics engineer, so there may be inaccuracies in this write-up. If you spot anything amiss, please bring them to my attention!

Characteristics at 25 C
Before Recap
After Recap
Projected Benefits
Net ESR
4.45 mOhm
1.072 mOhm
Lower the ESR and ESL, more stable the power delivery
Required Bulk C per
1800 x 3 uF
1200 x 3 uF
On board bulk C
18000 uF
13260 uF
Not critical. It just needs to be > the required maximums
Set Ripple current per phase
10000/3 mA
10000/3 mA
Depends on the number of phases the motherboard has
Required Ripple current per cap
1667mA
1667 mA
Depends on the geometry of the setup
Available Ripple current rating per cap
1600 mA
6100 mA
After-recapping, the margin is almost 3x higher than the required. Note that at elevated temperatures, the situation becomes more serious!

There are other aspects like ESL and its influence on VDroop that make OS-CON like capacitors very attractive but that is beyond the scope of this article.
{mospagebreak}

Note that this is a 3 phase design. This can also serve as a classic example of why ripple currents in SMPS power delivery can be rather harmful. Look at this naïve example: Say your SMPS puts out an AC ripple of 250mV @ 100 kHz. The ripple current without taking ESL into account would be 6250 mA (ESL will reduce this number)! Note that although ESL seems useful here, it plays a very detrimental role in other important scenarios. 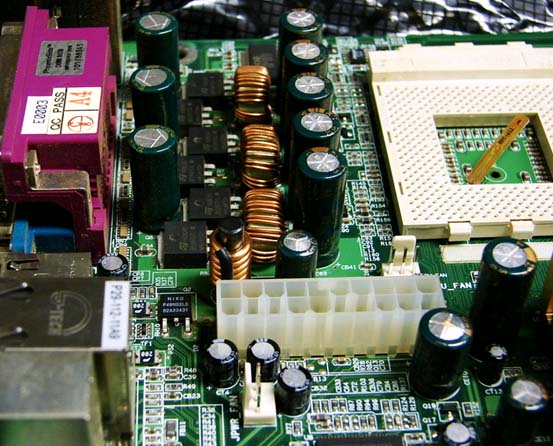 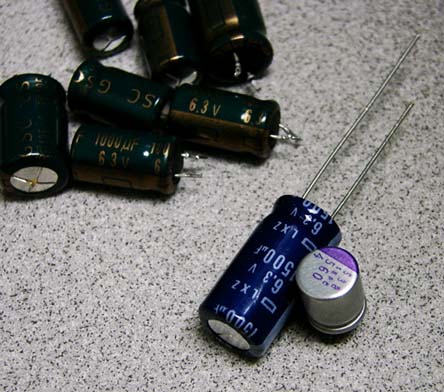 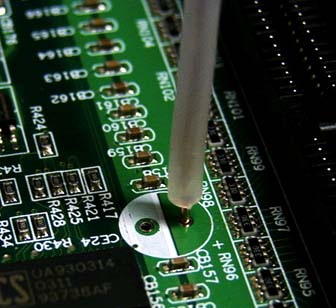 I’m using a copper BNC cable to clean the holes up. It is very easy to do if you have a good iron. The important thing to remember is to use more than a dab of solder to remove the bad caps. Solder to solder heat transfer is rapid because of the 2D spread of molten solder. Try to dab the back side of the dead cap hole with solder and it will come off easily. Using additional solder makes cleaning the hole easy because if the hole is completely filled, melting it when you insert the needle is painless and the result is shown in the next picture. 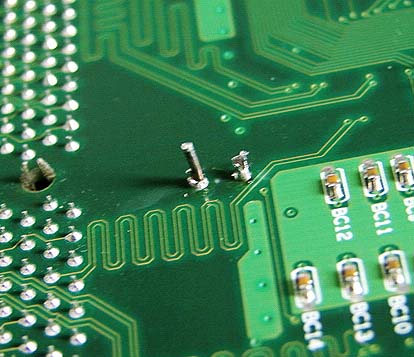 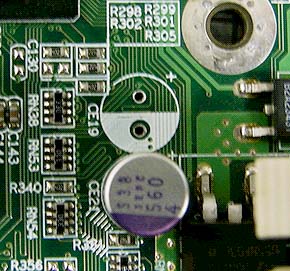 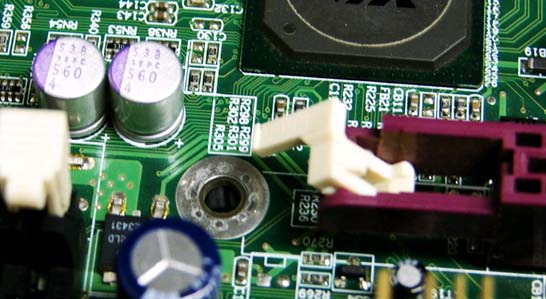 Replacements near the AGP port. 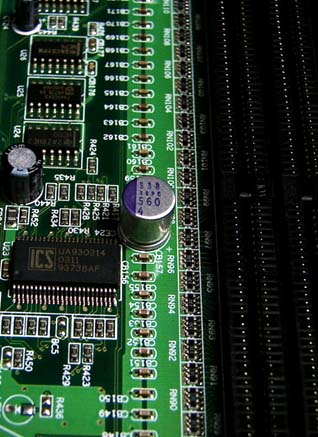 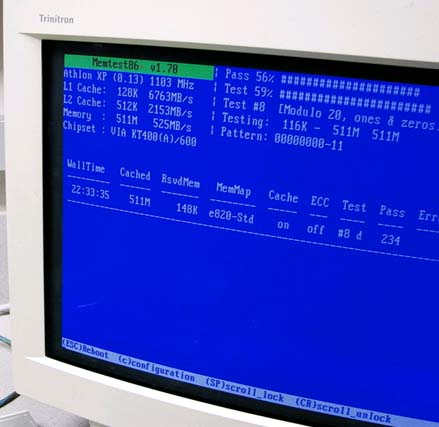 Memtest stable for 22 hours after replacing only the dead caps. 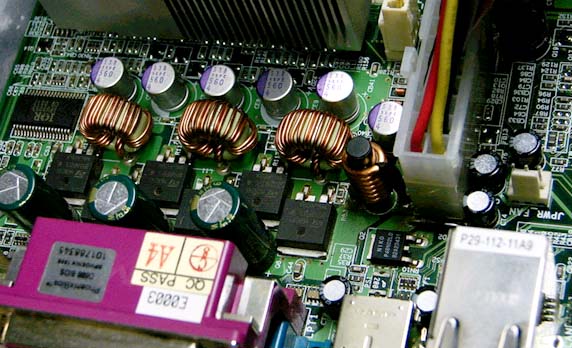 VRM Caps have been replaced. The Sanyo Electrolytics have been left untouched. 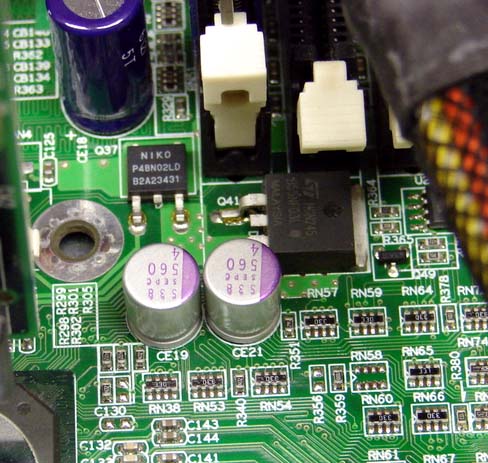 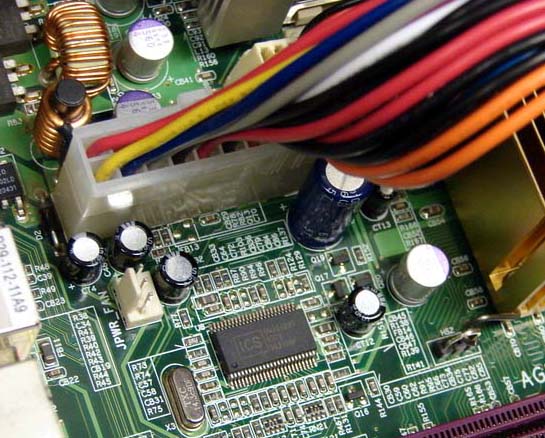 The finale – Memtest stable for 37 hours. I hope you have enjoyed reading this article as much as I enjoyed fixing dead motherboards!

Leave a message on My Blog to check for updates in analysis of this board or to get in touch with me.

Standard Disclaimer and Other Legal BS

The author is not responsible for anything (incidental or consequential) that happens to you, your dog, neighbor, mom, girlfriend… etc if you choose to tinker with electronics. The author strongly discourages amateurs, idiots and other sundry noobs from operating a soldering iron or handling sensitive electronics. If you do blow something up, do send me a postcard!

Here comes the diary of a long, tiring journey to achieve the result shown below: 1) The First Disaster: My power supply went crazy (I assume it went down first). I don’t know why or how, but the last voltage