Computex is the second largest trade show in the world and as such features the majority of the world’s IT industry and their products. Since it would require an article far too large for this medium to showcase even a modest sampling of the technical specifications of this vast array, I’ve instead endeavored to capture the overall spirit of the event. Forgive me if I’ve left out items in which you may have an interest and enjoy the images and commentary as we venture into the wonderful, congested and often wacky world of Computex. 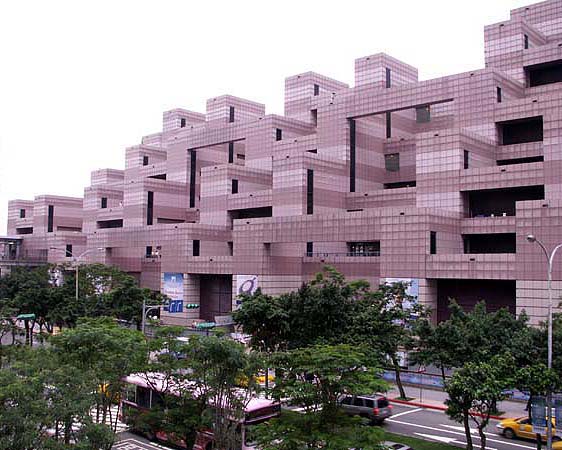 which surrounds the tallest building in the world, Taipei 101.

The first day of Computex may arguably be the best one if you really would like to make contacts with manufacturers. The crowds haven’t really arrived, so the aisles are easily navigated and vendors go out of their way to speak to you. 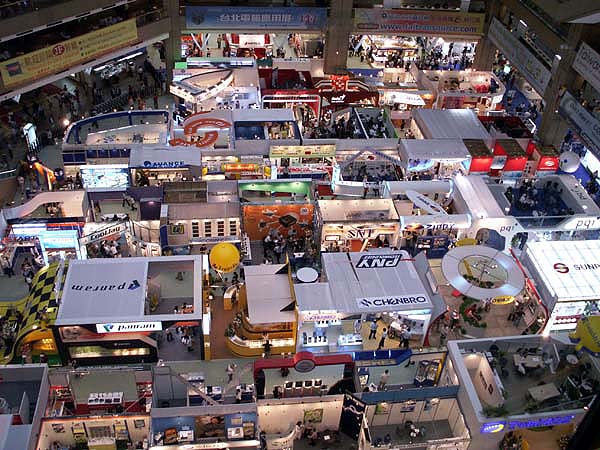 Exhibit Hall 2 had relatively few visitors on day one

By day two, however, the crowds have arrived and it can sometimes be hard to get close to the displays for the press of bodies, let alone talk to a vendor.

With the crowds comes a lot of the quirkiness (some may say charm) of the show. AMDdroids travel in large green groups down the aisles, aggressive vinyl-clad “show girls” of every stripe read memorized propaganda from their respective patrons making sure that everyone in the vicinity believes it, and costumed characters worthy of a Teletubby nightmare stalk the halls waiting for the next photo op. 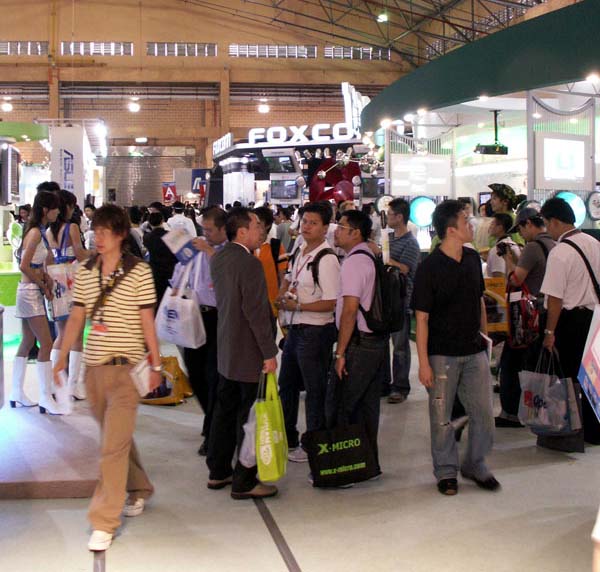 Day two of Computex saw the arrival of the ravening crowds 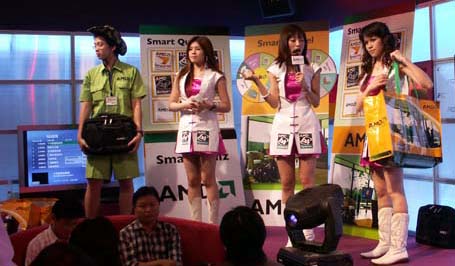 AMDdroids, showgirls and patrons. “OK! – AMD has fastest, bestest, most sophisticated architecture on planet and you buy now OK?!” 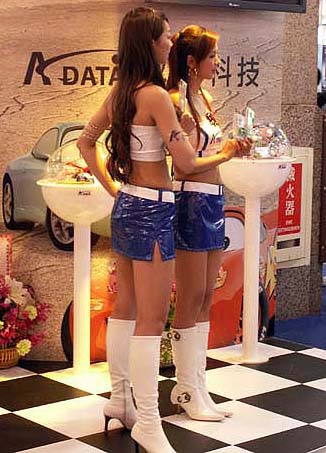 Vinyl manufactures did well this year in Taipei 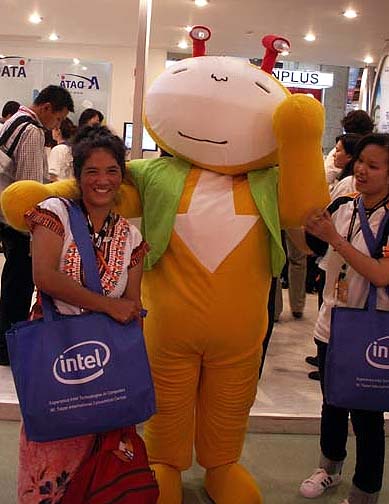 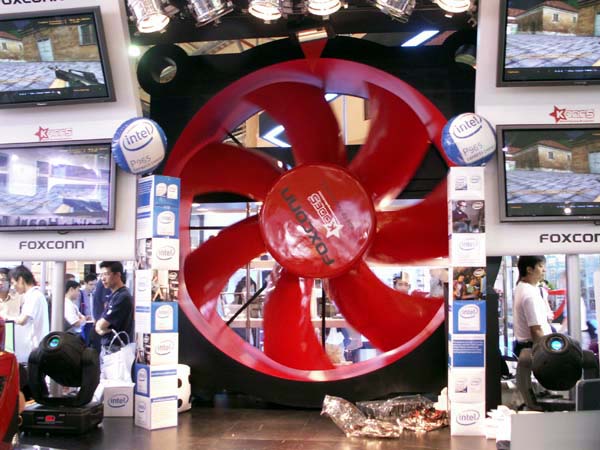 Ostentatious displays such as this were not unusual

One thing that added an extra bit of interest to this year’s show was the presence of Greenpeace outside the registration area on the second day. They came to raise awareness of the issue of the massive amount of toxic waste generated by the computer industry and the lack of an effective global strategy to combat it. Their placards convey the message quite clearly. For more information on the issue go
HERE. 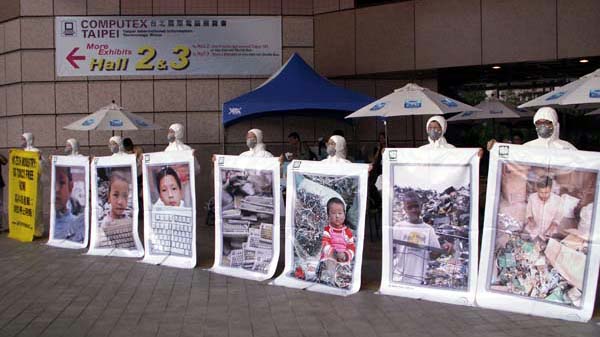 Despite the wackiness, protests and “passionate” show girls, the main purpose of the show is hardware. Socket AM2 was officially launched at the show, Intel demonstrated machines running the Core 2 (“Conroe”) family of processors and motherboard manufacturers had displays featuring both platforms. 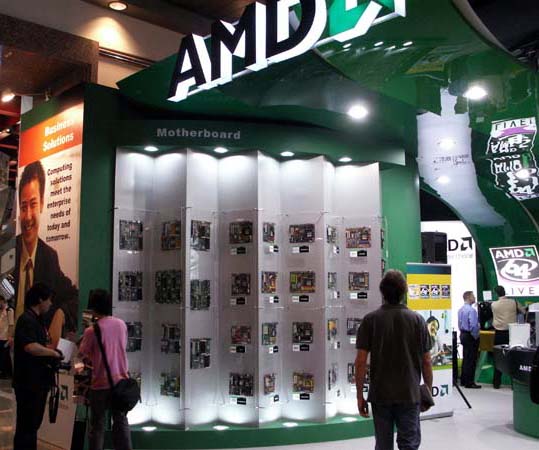 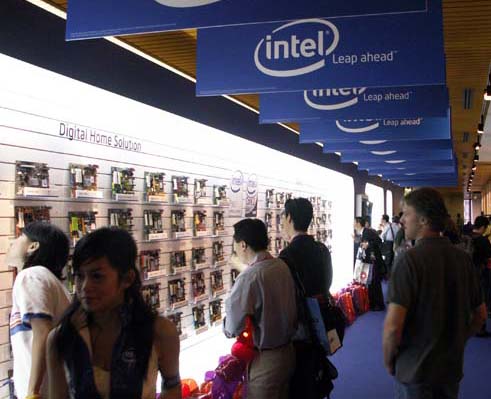 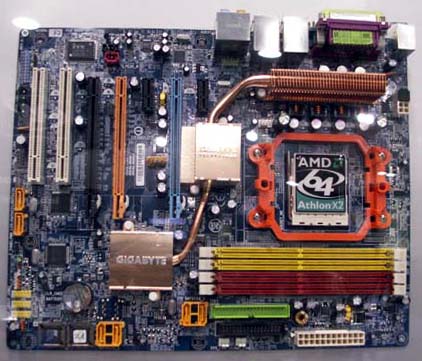 Enthusiasm was high among motherboard manufacturers for both AMD and Intel processors, but since the Core 2 family has not launched yet, they had far more socket AM2 boards on display (unofficial launch date for the Core 2 family will be the first week of August, according to an Intel rep who requested anonymity). 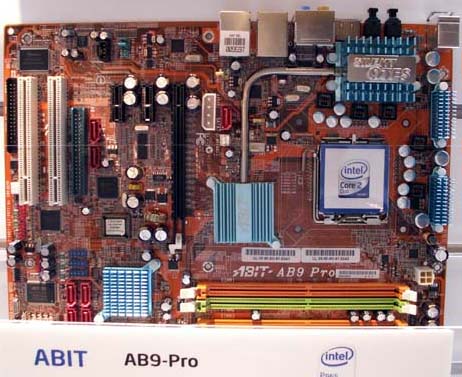 On the server side, there seemed to be far more enthusiasm from industry leaders Tyan and Supermicro for the AMD platform. While there were Xeon displays, there were a wider range of products displayed for the Opteron. At the Intel pavilion, however, there was a very wide range of products on display focused on maintaining the entire enterprise infrastructure. 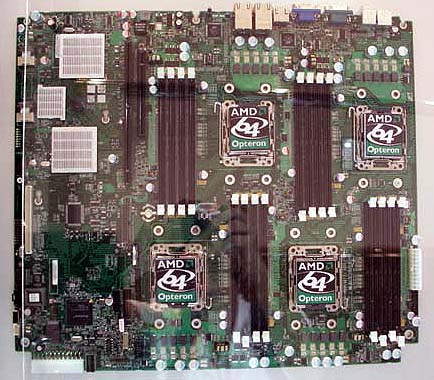 A wide array of Opteron products were on display. Tyan 4-Way Opteron board shown 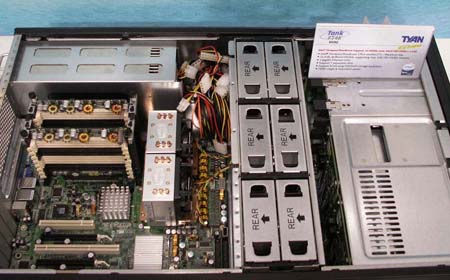 Xeon products were also featured, but not in quite as wide an array – Tyan Xeon server shown 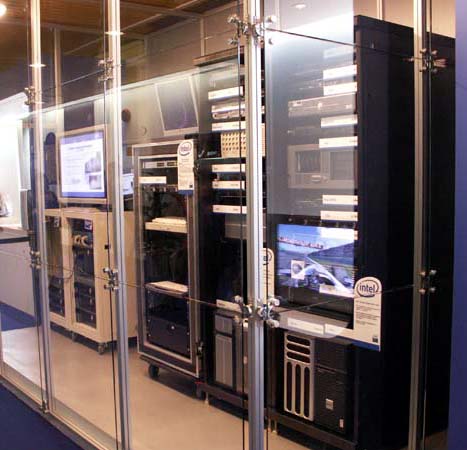 On the GPU front, both ATI and NVIDIA had a strong presence, with NVIDIA (as expected) displaying both chipset and GPU technologies. Video card manufacturers who use both GPUs tended to favor NVIDIA over ATI in their displays. 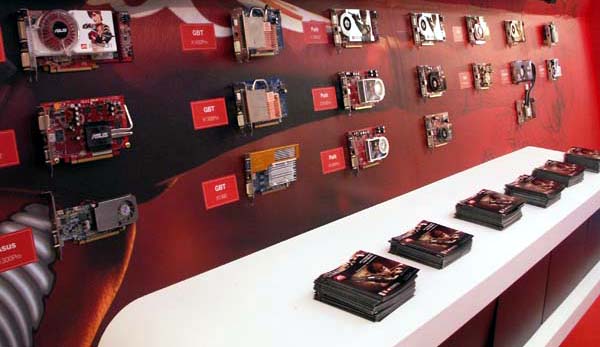 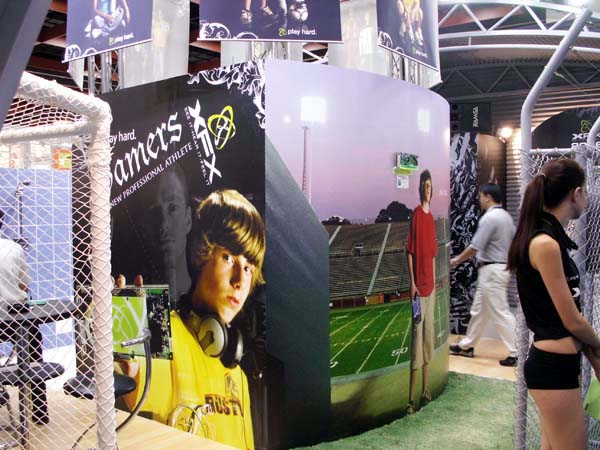 The XFX booth had goal posts, showers and free beer for dedicated buyers, but no cards on display
MINI ITX

Mini ITX promises to be a major force this year, with many manufactures demonstrating new models at Computex. These low-power systems are designed for home entertainment, industrial control and care entertainment systems. 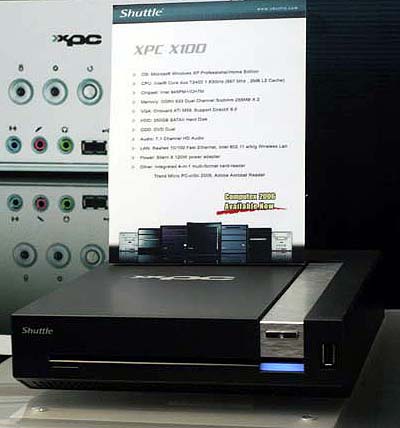 There were a wide variety of manufacturers offering elaborate heat-pipe cooling systems. Many of these are relative newcomers who are trying to break into the market. Designs vary widely with a great deal of copying of basic reference designs going on. The only manufacturers to show water cooling systems were Gigabyte and Coolermaster. 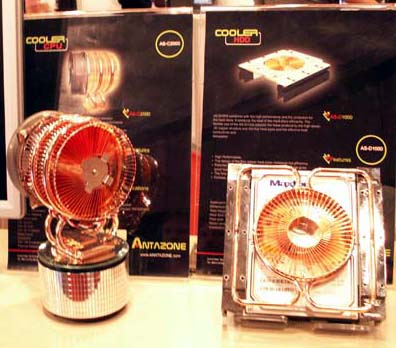 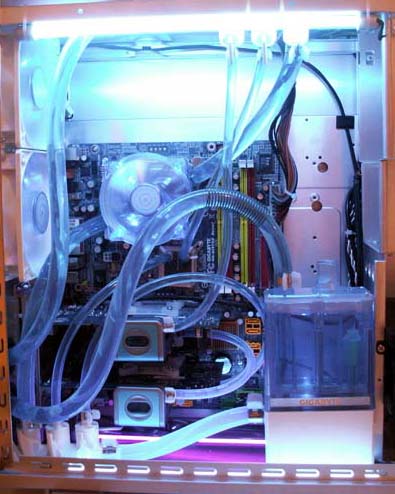 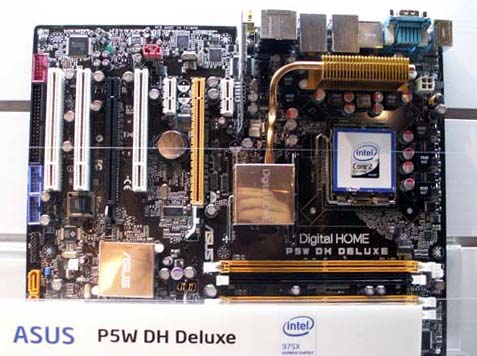 And Gigabyte extends heatpipes to both controller chips:

Virtually every manufacturer had a wide array of laptops on display. Models ranged from sub-mini tablets measuring 8 x 6 inches to massive desktop replacements with 19 inch screens. Turion processors seem to be making inroads, with most manufacturers offering models including the Turion X2 in their lineup. 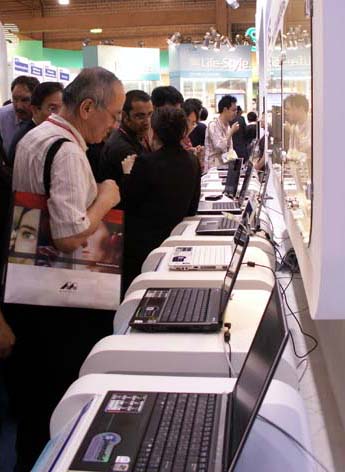 Laptops were ubiquitous throughout the show
MONITORS

Wide-aspect ratio monitors/LCD TVs dominated the show. Outside of the manufacturers specializing in medical display technology, there were few standard desktop monitors on display. 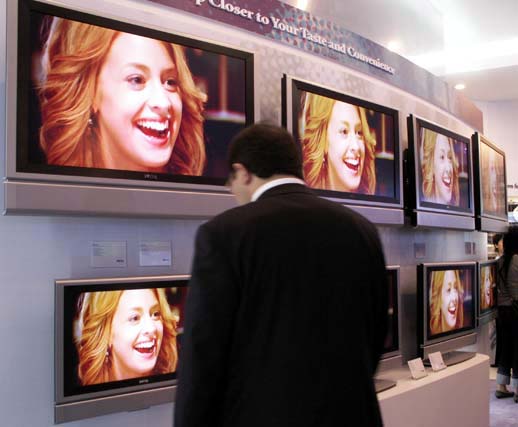 The scope and range of Computex is truly immense. In addition to consumer products, there are hundreds of manufacturers making everything from cables to embedded ICs represented. It’s an invaluable resource for the small business or enterprise seeking to make contacts with manufacturers and an excellent opportunity for individuals to learn about the latest technologies to get a “look and feel” for up and coming products.

From Wikipedia: “[W.C.] Fields spent his final weeks in a hospital, where a friend stopped by for a visit and caught Fields reading the Bible. He enquired as to why, since Fields was an atheist, to which Fields replied, “I’m

After I wrote the article criticizing some of the Northwood reviews, I got emails from quite a few people who basically said they had pretty much lost faith in the opinions of most hardware websites and just looked at their

There’s one huge problem with any digital copy-protection scheme. What about the old stuff? Music and movies have a much longer shelf-life than, say, software. If “golden oldie” radio stations work today, one could easily see “golden oldie” P2P networks