I have been toying with the idea of building a HTPC (Home Theater Personal Computer) for quite a while. The benefit of an HTPC is the ability to play digital media of virtually any format through a home entertainment system without having to swap CDs or DVDs on a set top player. The digital media could include DVDs, digitally recorded TV shows, music, internet video – you name it.

The TV becomes the monitor and, using a decent TV card in the computer, you basically have a DVD player on steroids with all the capabilities of a “regular” computer. I’ll also be able to copy all the races and movies I’ve recorded on my Dish Network DVR to this system to burn to DVDs for archiving.

Computers have been another hobby of mine for quite some time, so I figured this would be a pretty easy project to complete technically. I’m also a system administrator by profession so I have plenty of experience fooling with this kind of stuff. I’ve been building and tweaking computer systems for years, and although I never play computer games or anything like that, I did water cool one of my systems a while back just to see if I could.

It was also an experiment to see how far I could push the performance of the machine, which eventually allowed me to run an 1800 Mhz CPU at a clock speed of 2400 Mhz back before 2400 Mhz processors were even available. The articles I wrote on that project were published HERE and HERE if you’re into that sort of thing.

I had collected enough spare parts over time to build a complete system. The only issue was the drab beige case that just wouldn’t look all that great sitting in the living room next to my entertainment center. I wrestled with what color to paint this vanilla computer case and considered black, black with flames, red, red with flames, and finally had an epiphany: 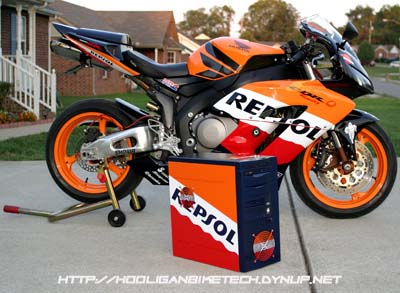 Not only can I show my support for one of the best products I’ve tried, Repsol Lubricants, but also combine two of my hobbies – computers and motorcycles. For those that aren’t familiar Repsol sponsors Honda in the MotoGP class of motorcycle racing. This is basically the WORLD level making the riders the best in the world. I own Honda’s replica Repsol 1000RR machine, so this paint scheme was perfect.

Once I spent a few days convincing my girl friend that a Repsol Replica computer would be a great addition to the otherwise tame furnishings in my living room, I was off to pick up the primer, paint, tape, and wet dry sandpaper. 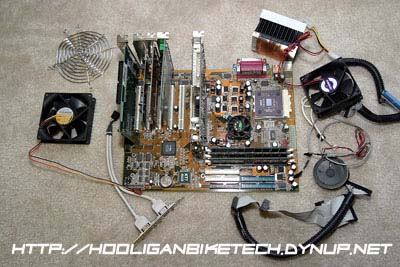 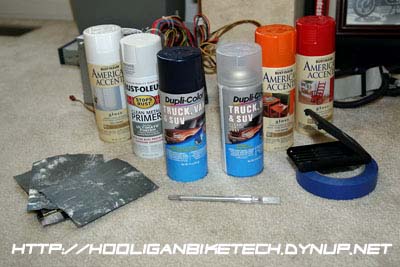 I wanted to keep this project on the cheap side, as I wasn’t sure how it would turn out, so I used Duplicolor automotive spray paint in Dark Blue Metallic (color # T164) and Duplicolor clear (color # T125) for the top coat. For the orange, white and red I used Rust-oleum paint and white primer that I got from Lowe’s.

I got the Repsol decals in the correct font and color from wristtwisters.com who do WONDERFUL work for a very reasonable price. I’m not sure the primer and wet sanding are 100% necessary, but I like everything to be as near perfect as possible, so I was willing to go the couple of extra steps to insure a nice smooth finish.

Using some tips I learned from watching Chip Foose on Overhaulin’, I made preliminary sketches to decide how best to paint the graphics on the PC case. I used an angle finder to determine the angle and a tape measure to determine the ratio of the color stripes on the Repsol Edition CBR1000RR fairings. I emulated this angle and ratio on the sketches.

After a few drafts I decided it would look best to have the top and front dark metallic blue similar to the bike, and the sides orange, white, and red – again just like the bike. This is supposed to be a replica after all.

With everything I needed at hand, I disassembled the computer case, CDROM drive, and floppy drive in order to get the bezels separated from the electronics. I washed all the parts I intended to paint in warm dish water, rinsed well and let them dry over night.

I did a quick test to make sure the Rust-oleum primer was compatible with the Duplicolor paint, and once confirmed I followed the directions on the can, putting three coats of primer on all the parts I intended to paint and set the parts aside to dry over night.

Once the primer was dry, I started with the dark blue and painted the top of the computer case, the front bezels, the CDROM bezel and the floppy bezel with three coats of dark metallic blue, again following all the can’s instructions. One thing I noticed was that the can claimed it was OK to paint as long as the humidity was below 60%, but I found this not to be the case. It really needs to be below 50% humidity for the paint to work properly, which caused me to have to wait several days for good painting weather as Tennessee summers regularly have 65-75% humidity. 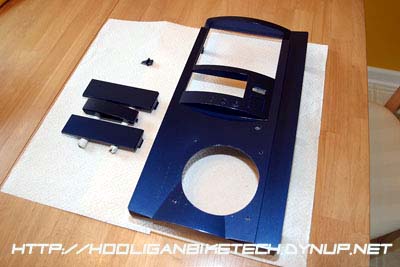 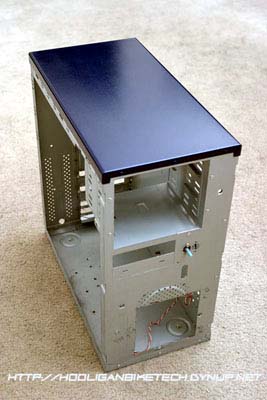 Once I had the blue parts painted, I followed up with three coats of clear, following the can’s instructions of doing two light coats followed by one medium coat and allowing 10 minutes in between. The clear really brought out the color and metal flake in the blue to make it look very nice. I set the painted bezels aside and began to work on the sides of the case. 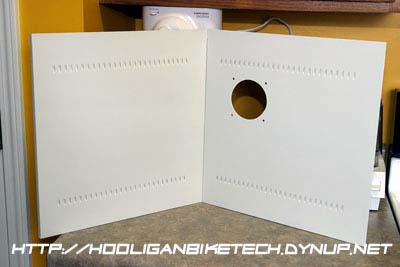 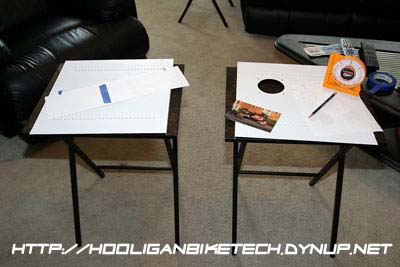 I applied a white base coat to the primed and sanded computer side panels and let them dry overnight. I then went back to my measurements to determine the angle and how wide each color would be on each side of the case. I made a template to mark the wavy edge the red would have where it meets the white and then traced this template onto a strip of tape applied to the case sides. 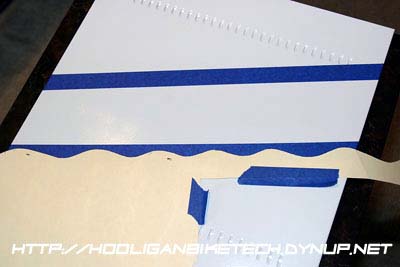 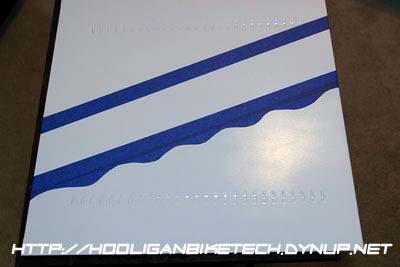 I then used a razor to trim the tape to the wavy edge so that the paint matched as closely as possible to the graphics on the CBR1000RR Repsol Edition motorcycle. With the orange, red, and white areas marked and matched to each side of the case, I masked off portions of the case sides with painter’s tape and paper to get the three colors applied. 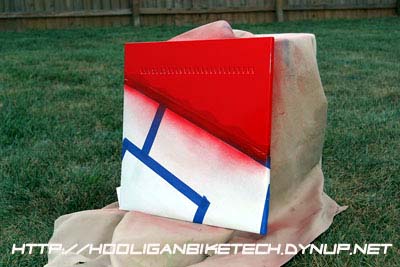 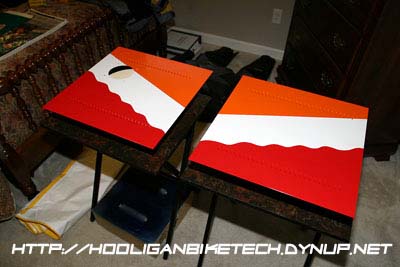 Finally, I applied the decals from WristTwisters to finish off the replica look: 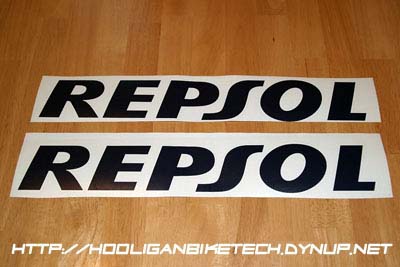 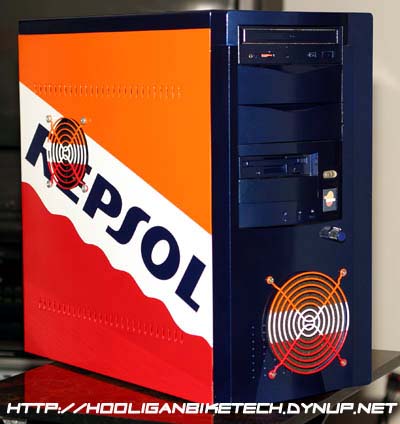 The components I put into this system are old left over pieces from previous systems I’ve built. The TV out functionality of this video card was connected to my receiver using an S-Video cable. I don’t have HDTV, so that was a non-issue for now. I have this system connected to the network in my office to have access to the digital media library, DVD burner, and the internet via a Linksys 54 Mbps wireless card which has worked flawlessly. For those that care about what components I put into this thing, here they are – cheap and effective:

I’m pretty surprised at how well the case turned out, especially for $35 in rattle-can paint.

With the system setup and connected to the entertainment center, it is functional and makes for a nice conversation piece. I used Windows XP MCE 2005 for the OS, but so far I’m less than impressed with MCE. Finding drivers for everything made me feel like I was using Linux but I eventually got most things working under MCE.

My TV tuner card isn’t recognized by MCE and although I found some news group posts saying there were hacked drivers available that worked, I could not find them. The ATI Remote does work with MCE as well as other applications, so that’s a plus. I’ve been using the included ATI Multi Media Center software and am quite happy with that along with PowerDVD. It seems the ATIMMC can do just about everything MCE can do and some things a little better.

I do use MCE for a few things like slide shows and music occasionally. Some of my issues, I’m sure, are from using dated hardware in this system, but it doesn’t take the latest greatest to run a HTPC effectively so I don’t see a reason to upgrade anything at this point. If I end up using this system A LOT, I will get another WinTV PVR-150 tuner/capture card as I have in my main computer system and a sound card with digital output. The WinTV PVR-150 has a hardware MPEG2 encoder/decoder for better quality and digital sound would be nice.

If anyone has suggestions on getting the ATI AIW 9000Pro to work with MCE, I’m open to suggestions. If I do eventually get it to work, I’ll update the info here with what was required.

The Inquirer has an article about some of the requirements for socket 775. The most obvious item of note is the need for a new power supply. Two 12 volt rails will be needed. Another item is talk about an Read More

The Inquirer points to another AMD roadmap. This roadmap is a bit different than the one they showed a few days ago in that this one shows which processor belongs to which socket. According to this, by Q4 2004, AMD Read More

SUMMARY: Very good choice for CPU cooling with moderate power waterpumps. Silverprop was nice enough to send a Cyclone Evolutions V2.0 waterblock to test. The Cyclone EvolutionS features ½” integrated hose fittings with only one seal between the top & Read More