In addition, Jason Weaver sent this in:

“This will probably be of use to a lot of your readers. It is a site with pictures, sizes, and make/models for heater cores so they know which cars to rip them out of at scrap yards.”

Have you ever noticed how expensive those watercooling kits are? Two hundred bucks – you have got to be kidding! 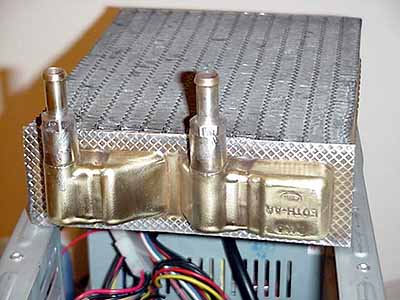 As many of you know, you can put together your own water cooling rig for one-fourth the cost, sometimes less. But where do I get the radiator? The heater core from an automobile works great. Heater cores a often made of copper which has superior thermal conductive properties compared to aluminum.

But the second you take a look at one of those grimy, dirty heater cores, you will be turned off instantly to the idea of putting it in your computer case.

Heater cores are easy to clean. The first step is to remove the dirty foam rubber shroud and throw it away. Next, take a garden hose to it, making sure you flush out the inside as well. But even after all of this, it is still nasty and corroded. There is grime on the inside of the heater core’s fins.

Take a 5 gallon buck and fill it half way up with the hottest water you can get your hands on. Dump plenty of toilet bowl cleaner in the water – the kind containing hydrochloric acid works the best. Submerge the heater core in the water. Be sure to check on it periodically because if you leave it in the water too long, the acid may dissolve too much of the metal and create a pin hole. It usually takes about a half an hour.

OK – your heater core is clean, it no longer smells like dog crap, but it isn’t quite a thing of beauty. The best way I’ve found to clean them up is to rub them with a 3M Scotchbright pad until they shine. If its still not shiny enough and you have access to powertools, I recommend buffing it with a mechanical buffer.

I don’t plan on using half inch diameter hose in my computer; this problem is easy to fix, as long as you have access to a propane soldering torch and a hacksaw. 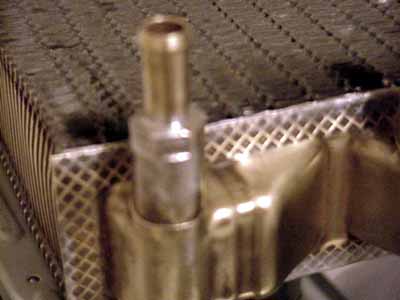 Not the clearest pic, but you get the idea.

Remove the ends of the tubes so that only three-quarters of an inch of tube remain. Then solder three-eighth inch diameter, threaded air nipples onto the tubes.

You now have a great radiator that looks swell and works like a million bucks. All you need now is a pump and a waterblock for your liquid cooling rig. So remember, women might not find you handsome, but they sure will find you handy.

SUMMARY: Looks like the performance race is on! Global Win’s latest is a good choice for Socket A CPUs, although the clip is a finger buster. Heatsink Factory* sent us a review sample the Global Win WBK38, its latest entry

Email from Gabe at Swiftech: “You know that I am always in search for added performance, so when EBM (Pabst) notified me that they were discontinuing my NGHH (rated at 33cfm), I immediately contacted the Delta people. I received a