First off, the standard disclaimer:

This volt mod is not easy, and there is great potential for killing your beautiful A7V, so think twice before starting. Ideally you should be prepared to replace the board in case the worst comes to the worst and your hand slips! I don’t want to scare people too much, but equally I don’t want somebody frying their A7V and complaining that I said it was easy. So don’t say I didn’t warn you 🙂

Now on to the article…

I’ve seen a lot of articles dealing with the basics of the A7V voltage mod, as first described by Tom’s Hardware. All I’ve really been able to find are lots of pictures of ‘before’ and ‘after’ shots of the voltage regulator showing where to solder the resistor, but never anything on how to actually do the soldering. I still suggest checking out the Tom’s Hardware article, so you can see exactly where to solder.

My aim in this article is to hopefully give clear enough advice on the actual soldering technique, so that somebody with little previous soldering experience can do it. I think most people can do it, because before I tried the mod I had never done any soldering on the small scale of the SMD components and the only practice I had was on the mobo while trying the mod (hardly practice I know!).

I have, however, soldered lots of basic wiring joins before while rewiring fans and my PSU and wiring up a relay to switch my pump on, etc… so that experience with a soldering probably helped. 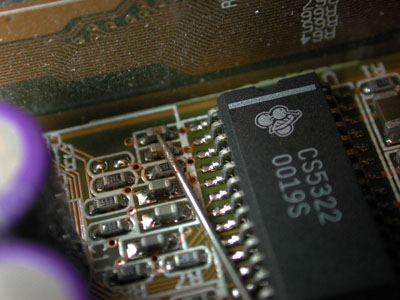 The pin tip gives you an idea of the scale involved. 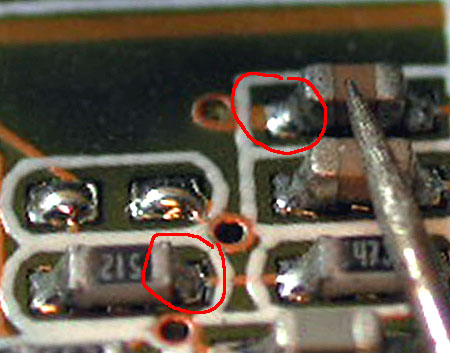 Still, the amazingly small scale of the soldering to be done shocked me when I opened the case and saw the voltage regulator module – I’m supposed to solder there???!! It’s only a few mm between the two points, and before you rush out and buy a smart soldering iron, look to make sure you’re confident. I used a 0.5mm tip, which sounds small but actually looks pretty big compared to the points you’re supposed to solder to. Now here’s how I soldered it:

First make sure you’ve got plenty of room – it’s worth the extra hassle of taking your mobo out (and off its tray if you have a case with a mobo tray). Take all PCI cards, CPU and RAM out to make sure you have as unrestricted access as is possible. I don’t think it’s possible to remove the module without desoldering the dozens of pins holding it in, and I definitely would advise strongly against this – it’s not necessary. Give yourself plenty of light – an anglepoise light is great so that you can really see what you’re doing. Remember, with an A7V at stake, you want to make it as comfortable as possible for yourself!

As prompted by Azz (cheers!), I used thin, insulated wire to connect to the points on the mobo. Strip both ends of each piece of wire first – if you try to strip it while it’s soldered to the mobo you may well pull it and the SMD component off the board… bad news. You can allow plenty of length in the wire, and the easiest way to keep the wire in place is to blu-tac it to the nearby capacitors and bend the ends into position. That way you don’t need to hold it, so shaking hands aren’t a problem – God knows mine were shaking, holding a soldering iron next to a £130 mobo… 🙂 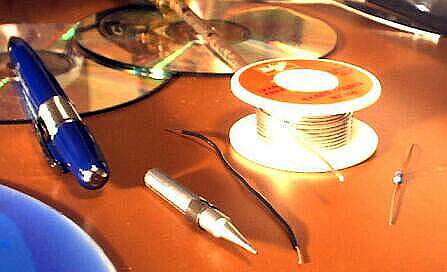 L – R: soldering iron tip (0.5mm), thin wire, multicore solder, 24k resistor. As you can see, I used quite thick solder – it doesn’t matter too much as you are applying it to the soldering iron.

With the ends of the wires in place, apply a very small amount of solder to the end of the soldering iron – if you use the flux cored solder it should flow more easily, which is essential for working in such small places. As you’re applying the solder to the iron, then to the work, it doesn’t matter what the size of the solder is – just make sure there isn’t so much on the tip that you risk smothering the whole area with it!

With a molten blob of solder on the end of the tip, press it against the base of the wire, where it touches the SMD component. Tease the molten solder into place, making sure it makes good contact with the PCB and fully covers the end of the wire. You may need to hold the iron in place for a second or two – the track on the circuit board needs to be hot to accept the solder.

Take the iron away, and the wire should be joined to the SMD component. One thing I’ve been thinking of is applying a generous amount of epoxy to the soldered joins to reinforce them – I can’t see any problem with this other than if the wire does somehow come loose it’ll be impossible to solder it back on.

Then it’s just a case of soldering the resistor to the ends of the wires, and voila! – the volt mod is complete! 2V+ is now yours to play with… just remember to keep those temps low; I personally wouldn’t be comfortable running above 45C with more than 2V if you want to keep that processor for long.

Lastly, a quick word on what I achieved with the volt mod.

At my previous max voltage of 1.94 v (set to 1.85 in BIOS), I could only get my Duron 600 to 918 MHz stable (watercooled with temps of 39C under full load). I have raised my voltage to 2.2V now, and the max temp I have seen is 43C – I’d prefer it if it was cooler, but I can live with it, especially as I don’t plan to keep the Duron for more than a few months and it won’t have much resale value anyway.

I can do a Gig absolutely solid – it’s been running for a couple of weeks now doing SETI nonstop – that’s what I call stable! I’m glad I did it, it was fun and damn satisfying when it worked.

I’m not a qualified electrician by any means – this is just the best method I found while trying to do it myself. If anyone knows whether I’m doing anything blatantly wrong please let me know so the article can be updated. Hope this helps some people thinking about the volt mod.

I just installed BIOS Savior RD1-2M kit from Multiwaveon my Soyo 7VCA motherboard. Followed the instructions started on my original BIOS chip MX29F002NTPC, switched over the BIOS Savior chip and flashed in the latest BIOS. Shut everything down and restarted