After Michelle at Evergreen
technologies
was kind enough to allow me to review the RumbleFX
force feedback headphones (which I love!), I was all too happy to
review their latest product – the RumbleFX 3D Sound Amplifier – when the chance arose. It showed up at my door, packaged in the same quality manner as the headphones, and I put aside some time the coming weekend to test ’em out.

That Thursday, my son brought home from preschool what can only be described as the “evil” flu. This miserable little “kiddie cold” kicked my 6-foot-4, 275 pound _ _ _ , and left me quivering on the floor. After missing 7 days of work, I can finally hear well enough again to give the 3D amp a fair shake. 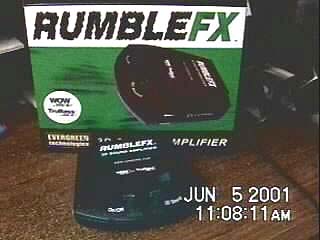 I have to admit, when I first opened the box I was a little put off by
the color….I-mac teal, but I have been seeing a lot of ATX cases
using it lately, so maybe it’s not so bad. It’s fairly compact, about
the size of a CD and comes with a 12v “wall wart” transformer and a six
foot 3.5mm jack cord.

There are 2 buttons on the top, one for power and the other to enable
the “3D” effects I will talk about in a second. 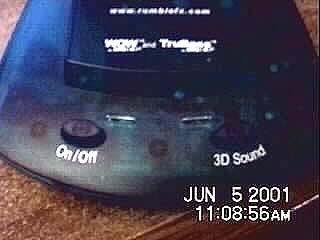 On the right side is a volume wheel and a headphone jack: 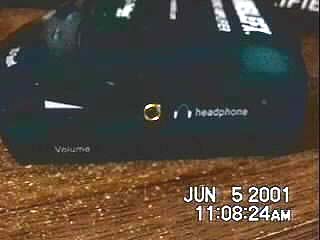 To the left are wheels to adjust the “WOW” and “TruBass” effects: 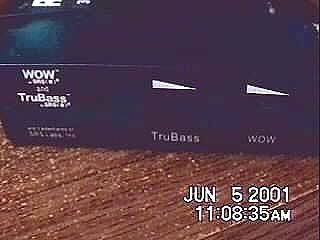 The back side sports RCA style line in and out connectors,
a 3.5mm stereo input and 3 watt amplified jack, and the connector
for the transformer. 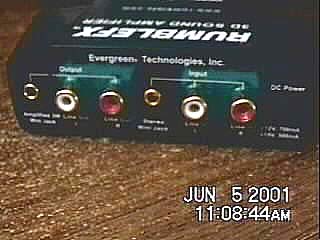 The construction is pretty solid. Transparent blue plastic with
nice rubber feet, similar to a good USB or network hub. One problem
I did have is the power cable falling out of the back of the unit. The
jack doesn’t hold the cable end very well, and it’s prone to being knocked out. The rest of the connectors are gold plated – first rate stuff!

I guess I had better explain the 3D a little.

This device uses 3 technologies licensed from SRS labs. “WOW”, “TruBass” and “Focus”. Here’s what their web site says about them:

Let’s see if it works!

My first test was with the anemic AC97′ onboard audio from my
Iwill motherboard. I started out in game with the effects turned
off. I hit 3D sound button and you could immediately tell the difference,
although it’s hard to explain the effect. Just as Dolby, EAX and A3D all
sound a little different, so does WOW.

Next I hooked it up to my home tape deck and ran it back to the receiver. The effects worked as as advertised, with basically the same results as the PC.

For the last test I hooked my personal CD player into the “mini-jack” in, and a pair of $5 PC speakers to the 3w amplified out. I was pleasantly surprised at what these cheap-o speakers sounded like once you turned the “3d sound” on. It was almost as if they had a little bit of bass, and was a 100% improvement to what they sounded like with it switched off.

As far as price goes, at the time I was writing this, I noticed that this unit was selling for $52 at E-cost.com. That’s a bit higher than I expected.

All in all, it’s a nice unit, does its job admirably,
and works perfectly to run the RumbleFX headphones on anything with an
out jack.

But as versatile as it is, it’s not for everyone. I would probably only use it to run my personal CD out in the shop. For this, I would be better off buying some cheap, powered PC speakers for $10. Also, if your sound
in your PC is lacking, I recommend you buy a premium sound card with the
$50.

But If you really want 3D sound and have an older TV/VCR/HI-FI that
doesn’t support it, or are determined to play console games with better
sound, this may be just the ticket!

I am gonna’ give this product the DrSurlyjoe “frost point” rating.
It’s really cool, and has only a minor issue, but is kinda’ pricey.

Two AMD news items haven’t gotten much play, but they are important: AMD now “plans” to go to 45nm high-K CPUs. Bulldozer is still alive and should show up as samples in 2009. It’s hard to say whether the first

I see the Chinese are up to their old tricks again. The Peking city government took something called “Red Flag” Linux over MS for its OS. For at least a century, Westerners with things to sell have been mesmerized by