As long as “shooter” games have been around, I have been playing them. I’ll never forget the day I got my first real sound card and sub woofer/satellite setup. Once again, I was aghast at what marvels technology could conjure up; the immersion level of the games rose to a new level, almost equal to the wonder of the first 3D accelerators.

Now that I am a family man, help run a web site, design water-cooling and
work a real job, it seems like the only time I get to play my beloved games is when the house is dark and I’m the only one awake – this basically means headphones. I have, after several bad purchases, ended up with a couple of pairs I was happy with, but still hated knowing that my
sub woofer was sitting down there dormant. I have listened to a
lot of headphones and pretty much have heard them all – but force feedback was gonna’ be a new thing for sure!

They come in a nice enough box and
were securely packaged. Upon opening it, you see a bulletin warning you
that these are high powered headphones and could possibly damage
your ears if set improperly. Also included were the manual, the cord, a
gold plated 1/8″ to 1/4″ adapter for your old tuner and a couple of AAA
alkaline batteries (YES, it takes batteries). At first I thought “Why not USB and skip the alkalines?”, but realize now that would have limited its use to PCs only. 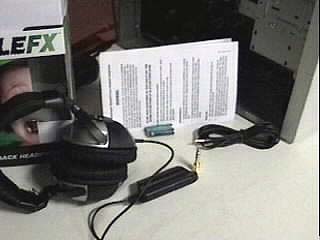 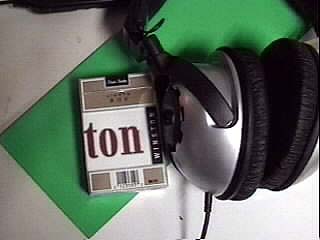 These are pretty good sized units – they remind me of the recording
studio headphones from my saxophone playing days. This is a blessing for
me since I have very large ears. I was quite pleased that I did not have
to fold them up to get them inside the ear cups. I also noticed that, unlike the studio headphones, you can still hear the phone or the doorbell ring if you don’t have them turned up too loud. The padding is soft and the overall construction looks pretty durable. They are not particularly heavy – I would guess about 1 pound – but didn’t have a way to accurately weigh them.

At first, I had trouble deciding which way to put them on my head, but after further investigation I found this marking inside the headband: 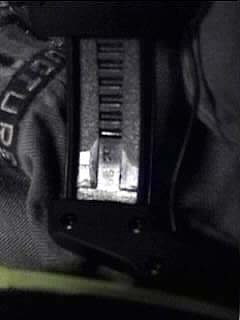 After wearing them a few times it’s not a big issue, but they could
have labeled the sides a little more clearly. The detents for the headband
adjustment are nice and stiff, and the padding is equal to that of the
ear cups.

One thing I really like about the headband are these little vertical
swivels. These keep the ear cups snug against your head without a bunch
of excess pressure to compress the foam: 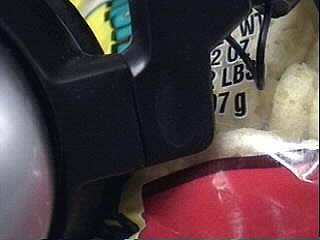 Here’s a shot of the control unit. It’s slightly larger than a disposable
lighter and houses the two AAA batteries that power the transducers for
the force feedback: 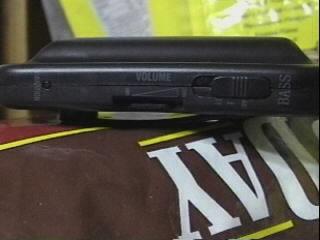 There is a thumb wheel for the volume and a three position
slider (off / low / hi) for the Force feedback.

There is about 18″ of cord between the headset and the controller,
not enough to sit it on the desk. You can almost make out the clip on the
bottom to attach it to your clothes, or just let it dangle, but it might
stress the cord. It would be nice to have the cord a couple of feet longer. It also comes with a 12 foot, double male connecting cable that plugs into the control unit; this is a nice feature so that you can replace the cable with a standard headphone extension and not have to do any repair work.

Of course, I had to mod them out a little for personal
use! (too bad I didn’t have any black tech ties). 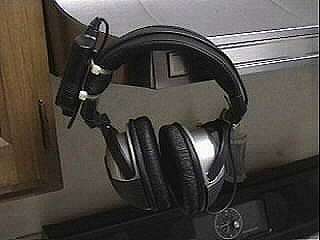 Time to plug them in! It states in the
manual that you’ll need to plug them into speakers with an amplified
headphone jack. I tried plugging them straight into the sound card – the
results were unimpressive. However, Evergreen Technologies has a new product coming called the RumbleFX 3D Sound Amplifier (availability end of April) so you can use them with any device with a 1/8″ audio jack and get the full effect.

The first thing I did was check all my volume
controls and make sure I wasn’t gonna’ fry my brain, then I fired up a
little Primus “dueling banjos” to see what the sound quality was
like. I was very impressed – the banjo and guitar were crisp and clean, as good as any consumer headphone I had ever tried. Next was “too
many puppies”, a hard hitting metal tune driven by Les Claypool’s legendary bass plucking. Again, I was impressed with the quality of the sound and noticed no distortion at levels that made my eyes water; but wait…..there’s still the bass slider.

My reaction to turning on the force feedback was the same as everyone
else that’s tried them – a great big smile!!

Not only do they work, they work very well! I have to get in my
car and risk blowing the back glass out to get bass like that. The effect
varies from a subtle hum to a serious rumble that tickles your sideburns.
Never have I enjoyed listening to loud music with headphones like I do
with these. But these are for games right ? Let’s find out!

My favorite game is Action Half Life, so that’s
what I started with. The sound quality is as good or better than my $45.00
Sony music headphones that I was using before, but now it has bass! They
worked equally well with EAX and A3D as well as my old “Ensonic” beater
card, although the 3D cards as usual sounded a far cry better.

I can’t begin to describe the feeling of a grenade going off to the
side of you in the game while wearing these – you can almost feel the blast.

And unlike my under desk sub woofer, you can tell which side of you the explosion was on. The other weapon sounds were equally impressive.
After 10 minutes I had to set the force feedback slider to low because
it was just too much of a good thing!

Next I played a little Q3 “excessive overkill”.
This has to be the loudest game I have ever played. The multiple explosions would make my Sony’s sound like they had gravel in the drivers; not so with the FX’s. They sounded great and never distorted, even when I jumped down onto 2 grenades and was lunched to the heavens. These are some LOUD! headphones, and extremely clear at a loud enough volume to deafen you in short order.

Now I know a lot of you are saying: “Ya, but they’re
headphones! I can crank my sub woofer as loud as I like!”

The one advantage these have is that there are 2 bass drivers, one for
each ear. That doesn’t sound like a big deal till you notice, all of a
sudden, you can hear the battle from afar and determine the direction of
the explosions that were normally reproduced monaurally through the sub
woofer. On the flip side, you have to wear them on your head and you’re the only one that can hear them.

Here’s my Pros and Cons:

Overall, I highly recommend this product to anyone like
myself that has to settle for “fraggin’ with phones”, or listening to heavy music with little or no bass.

Also, those that play games competitively will definitely benefit from having essentially separate sub woofers for left and right channels. My two big issues, the cord and the markings, are trivial after you are familiar with using them. The batteries are a necessity at this point, but it would be nice to see a USB-PC only version in the future.

This is a very well designed and built product. It is
well worth the few extra dollars you’ll pay over regular head phones
of similar audio quality to have bass that rivals that of a high end sub
woofer.

Seeing as this product is targeted at people like me, it’s no wonder I like it so much. They’re “just what the doctor ordered!”. I’ll mail them my 60 bucks before I let ’em have this set back! I’m giving this product the Dr. Surlyjoe “sub-freezing” stamp of approval for being so damn cool!

Ed note: Be sure to check out DrSurlyjoe’s latest creations at Spodes Abode.

Also check out the homepage on RumbleFX’s website – special effects make the whole screen vibrate! And thanks very much to Michelle for sending these our way!

The Bad News In a sentence, the nForce FX does little better than a Radeon 9700 Pro in some things, and usually does worse when you want to use some of that raw power to spiffy up the image. For

Intel will shortly push aside its “Intel Inside” logo in favor of (at least for the V//V line) “Leap Ahead.” While we shouldn’t analyze logos like they were make-or-break decisions, after all, any logo slogan more positive than “This sucks”

There’s been a number of articles the past number of days saying that Vista’s licensing terms are rather more restrictive than XP’s. This article tries to claim that this isn’t so, then seeks to reassure the average reader by saying