This guide sheds some light on some little known features of Ghost.exe (operating in DOS mode) by me before I delved more deeper into it. This text is a simple How-To Guide hopefully assisting a person too lazy to read all Ghost Documentation and willing to quickly use Ghost.exe to easily backup her or his computer’s OS partition onto an image on a bootable CD.

If Your PC Has a Floppy

I hope you have never lost your machine’s bootable and carefully tuned OS partition, often referred to as the C-partition, but I did, and couple of times. So I wanted to find a relatively easy solution to make a snapshot of the perfectly working C-partition of my laptop and be able to restore it quickly in case of disaster, which I normally cause when trying new hardware or new version of drivers on my PC hardware. I would have to spend a day or two, or sometimes three, to install the OS – in my case Windows XP, get the internet up and running, get all the drivers and tune up my C-partition to a perfect working condition.

Well, I have tried several backup programs which came along with my PC’s, laptops or OEM manufactured CD/DVD burners, such as Nero or Sonic, but I could not figure out how to create bootable set of CDs so I could just stick them one by one into my dead machine and get it up and running to the snapshot stop point in half an hour. This let’s me experiment with my machine’s C-partition and if I screw it up, then quickly restore it to its nice and shiny pre-screw-up condition.

Eventually came along Norton Ghost 2003, available as free download for a month. I installed it and after watching several videos was so happy that now a bootable backup will be possible. Well to make a long story short, I have spent a week trying to follow videos, reading through Ghost documentation and digging through smarter than I am people’s blogs and forums, but still I could not make the Ghost installed in Windows XP produce a bootable set of backup Cds of my C-partition.

My main problem was the bootable floppy produced by Ghost could not find some needed Adaptec drivers for the CD-burner. I could not figure out how, where from and which drivers exactly to add to Ghost’s configuration setup panel before Ghost creates the bootable floppy, which I am supposed to use later to burn my bootable set of Cds, containing the image of my PC C-partition.

So after a week of beating my head against the Ghost wall, I was very close to giving up and thought “Well, presumably Ghost is cool software, but, as you became old and silly, you cannot comprehend it, so just forget it all together”.

But the thought about other people mentioning in their posts that Ghost is capable of making a bootable CD would not let me give up completely. So I de-installed Ghost from XP completely, stuck in the diskette it generated and booted from it. I did one thing differently this time – I would not let it run its config.sys and autoexec.bat files. I started browsing the diskette, paying attention to details and, finally, discovered and ran the Ghost.exe by itself from the diskette subdirectory it was sitting in.

That is where fun began.

Ghost.exe is worth looking at it, a clean and beautiful program. I looked through each and every menu choice it has. Of course I enjoyed reading the command line options panel – very rich functionality is there. I said to myself “If only an idiot like me could put at least a fraction of this power to do the bootable backup work… and those drivers which are missing are not letting me use all this power of Ghost.exe.”

Couple cups of coffee later and much sooner than I expected after the whole week of frustration of being not smart enough, and thinking I am complete idiot, I start feeling I am close to some important discovery… and it happened!

Browsing around Image Save menu I suddenly saw the list of ALL drives my little old laptop has – Ghost is so smart it actually showed the CD burner, recognizing its model… OMG! Even though I skipped all config and autoexec settings and none of the generated diskette drivers have been loaded at this point at all! But Ghost is cool to see my HDD partitions, floppy and the CD burner!

At this point I felt like a total, round and complete idiot. I remembered all my days spent reading through documentation, forums, blogs, Symantec web site help section, talking to friends etc, if only I would have known the answer is inside just one cool DOS executable called Mister Ghost.exe!

The rest was all intuitive steps through Ghost menu: choosing the source backup partition C, the destination CD burner, confirming to make the first CD bootable, selecting the current floppy as the source for boot sector and DOS files, choosing no compression – and it flied! In half an hour Ghost.exe spit out four CDs, the first one being bootable and the four together now contain my PC’s C-partition image.

Just to stay on the safe side, I asked Ghost to verify the newly burnt Cds, which it did and confirmed they were all good. It took another half an hour with my PCs slow CD burner, of course, but that is the price for safety and reliability.

Next I went wild and wiped out my laptop’s HD as a whole, using one of these Zero Writer tools which came with my hard drive OEM CD (I am using 7200 RPM HD in my laptop).

So I killed all data completely, all these billions of little magnetic particles on all surfaces of my HD’s aluminum disks are now heading “south” into their zero position, nice and clean – data is none, nothing, zip.

I rebooted the machine. It was dead sitting in the black screen telling me there is no OS. That is what I wanted to complete the experiment, pretending I got hit by a virus which wiped out the hard drive, escaped back to the Internet and shut down my machine, and I have heard such things could be caught in the wilderness of the Internet.

Now the moment of truth came.

I put the first backup CD in and rebooted. My laptop booted from the CD into DOS. I ran Ghost.exe from this CD. I told it to restore the image from this CD. Ghost started working, asking me for the next and next CD and in half an hour, – finished! I rebooted the machine.

The machine came up into my OS welcome screen quicker than before, (most likely zeroing the HDD helped at least a little bit 🙂

I logged in and here I am, inside my working environment nice and shiny, as it was before – thanks Ghost.exe, and you, the reader, as I hope this short article may help you a little bit too.

NB: All software/hardware or other products/programs mentioned in this article are copyright their respective creators/manufacturers, I am not affiliated in any way with any of them, nor should I be held liable for mentioning their names in this text.

Well, some of my, if you will, “oversimplified guide to” ghost.exe has generated a noticeable splash in my email inbox, ranging from “floppy? What is it?” to “Ghost 10 solves it all out of the box”, to “help! Need more details to make bootable CD set!”

OK, all fair, shall I continue describing my Ghost experience? Maybe, if at all, and with a bit of extra salt and pepper:

Well, now that all my home PC-s and laptops have been reliably backed-up and tested, I have had this nice feeling of being bored; start forgetting these three weeks of fun with Ghost. Sometimes thought “Would I ever need this CD?”

When I’m home, my kids and grandkids use my PCs and laptops a lot, so sooner than later these young gentleman caught me in a nice presence of spirits and insisted I would stop being crazy about security and drop login passwords, as they are bored asking me all the time as I change my passwords often.

My older grandkid also managed to null the password on my wireless hub as he was playing with his new Christmas present – X-box – and, no wonder, having been excited I forgot to restore it along with the MAC filter and 256-bit key on the wireless hub.

Things happen when some old kids like me allow younger kids play with home network.

Yes, the day had come.

I was glad though. Because here my backup CDs came in handy and I could restore my “who is the boss” thingy in the eyes of grand/kids. I felt important and honored again! We all together worked as a rescue team, disconnecting each machine from the home network. We wiped out and zeroed out all HDs (my mid-grandson was so excited – it is NOT a GAME or MATRIX movie – it is real-life VIRUS ATTACK!!!).

We restored all machines from their Ghost bootable backup CDs. It took us about 30 minutes per machine. Being old and slow, I would spend at least two days per machine if not for these backup CDs.

With the wireless hub, we have had to perform the “factory hard reset button” thing which wiped out all corrupted memory brains so we could get back into the wireless access point business and configure the wireless router from scratch, ensuring strong passwords for admin and user, fresh MAC filters and the strongest available 256-bit security keys.

All over with the excitement, three machines and the wireless router were back online in about two hours. It would have taken me much longer would I have not had the wonderful team of grand/kids plus my magic bootable recovery Ghost CDs. And the key word is “bootable” – all machines hard drives had to be zeroed, including master boot record and file allocation tables – we did not need any OS / Drivers / Internet setup / etc CDs at all.

Once all machines were up and running, we made sure no “extra” processes existed in the Windows Task Manager. After some experimentation, and kids loved to “kill” the garbage processes; it appeared the following set of about 24 processes, shown below, are quite enough in our home “all purpose” PC, so to speak, general Internet browsing wireless configuration. 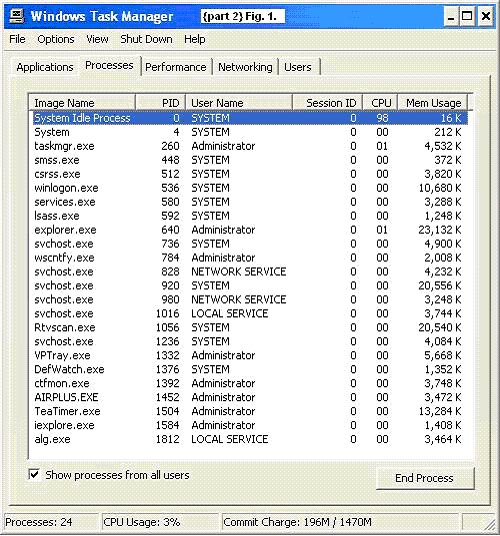 NB: All software/hardware or other products/programs mentioned in this article are copyright their respective creators/manufacturers, I am not affiliated in any way with any of them, nor should I be held liable for mentioning their names in this text.

Windows 7 is starting to show how impressive it can be, showing off its real colors in its performance; but what about disk performance?