Samsung has just announced the 980 NVMe M.2 SSD. This will be Samsung’s first SSD drive that lacks onboard DRAM. Instead, the 980 SSD relies on the CPU’s DRAM via the PCIe. The approach of utilizing a DRAMless controller still provides NVMe speeds via PCIe 3.0 x4 while reducing overall costs. With rated sequential read and write speeds of  3500 MB/s and 3000 MB/s, the 980 isn’t a slouch. While these drives will not be at the bleeding edge of performance, they will be some of the most affordable based on the performance you receive. 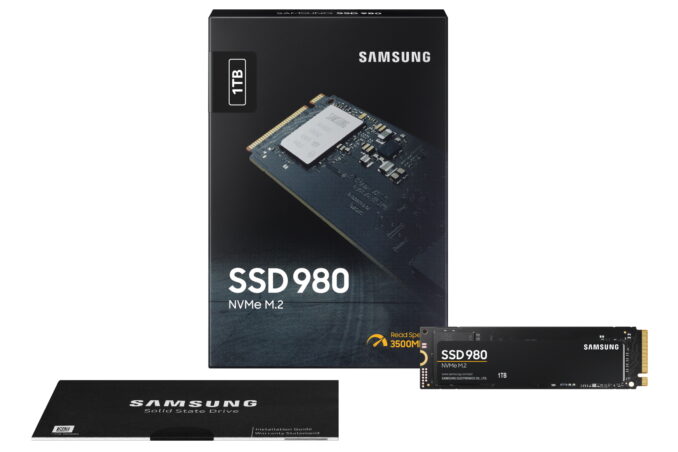 Previously, DRAM-less designs have presented a disadvantage in speed without the short-term memory at hand for fast access to data. Samsung’s 980 utilizes Host Memory Buffer (HMB) technology, which links the drive directly to the host processor’s DRAM to overcome any performance drawbacks. This technology, coupled with the company’s latest sixth-generation V-NAND as well as optimized controller and firmware, enables the 980 to provide NVMe performance with six times the speed of SATA SSDs. Sequential read and write speeds come in at up to 3,500 and 3,000 MB/s, while random read and write performances are rated as high as 500K IOPS and 480K IOPS,3 respectively. 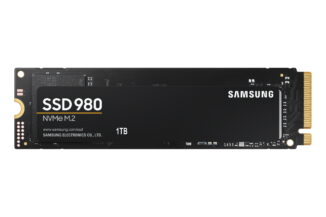 The newly upgraded Intelligent TurboWrite 2.0 also offers significantly enhanced sustained performance over the previous iteration4 by allocating a much larger buffer storage area inside the drive.

Additionally, consumers will no longer have to worry about their drive overheating, thanks to its advanced thermal designs. With Dynamic Thermal Guard technology, nickel-coated controller and heat spreader label solutions available in Samsung’s high-end 980 series, users can enjoy stable and reliable performance even during prolonged use.

The SSD further features improved power efficiency of up to 56% when compared to the previous 970 EVO,5 allowing laptop users to better manage power usage. 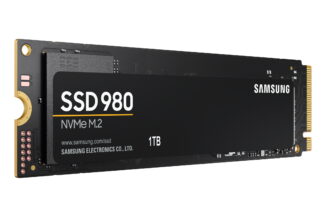 1 The NVM Express® design mark is a registered trademark of NVM Express, Inc.

6 Samsung Electronics will not be responsible for any damages not covered by the limited warranty, including but not limited to any loss of data or other information stored on Samsung Electronics product or any loss of profit or revenue which may be incurred by user due to loss of data. For more information on the limited warranty, please visit samsung.com/ssd.


7 Product covered for five years or until fulfillment of the TBW rating, whichever comes first. For more information on the warranty, please see the warranty document enclosed in the package.

Today we’re back with ADATA’s latest model, the XPG Gammix S70 Blade. This M.2 NVMe PCIe Gen4x4 SSD shares a similar nomenclature as the Non-Blade, but is this the same drive with a new slimmer heatsink? The answer to that question is actually yes, and no. Before we dive into that, let’s first look at the listed specifications and features of the Gammix S70 Blade.

With the cancelation of Computex 2020 due to Covid-19, some computer vendors have been getting creative with launching new products. Just this last September, Team Group hosted a consecutive three-day online launch event with new products being introduced every day. One of the products released was the Cardea Ceramic C440 Gen4x4 NVMe SSD. This new drive features a unique aerospace-grade ceramic heat dissipater and excellent performance.

Samsung has just announced the 980 NVMe M.2 SSD. This will be Samsung's first SSD drive that lacks onboard DRAM. Instead, the 980 SSD relies on the CPU's DRAM via the PCIe. The approach of utilizing a DRAMless controller still provides NVMe speeds via PCIe 3.0 x4 while reducing overall costs. With rated sequential read and write speeds of 3500 MB/s and 3000 MB/s, the 980 will be no slouch. While these drives will not be at the forefront of speed, they will be some of the most affordable based on the performance you receive. The 980 is available in three capacities, 250 GB, 500 GB, and 1 TB, and can be purchased directly from Samsung or any vendor that normally carries Samsung products. Pricing will start at $50 for the 250 GB model, $70 for the 500 GB, and $130 for the 1 TB. Here is the press release from Samsung.