Over the last 6 years I have lived in houses, apartments, and general communities that did not provide access to high speed internet or broadband of any type.

Then Hughes came up with a satellite system that could receive via satellite, but still only transmitted via modem. No great help to a gamer there, until now.

A friend got me a DW4000 DirecWay Two-way Satellite system for Christmas. 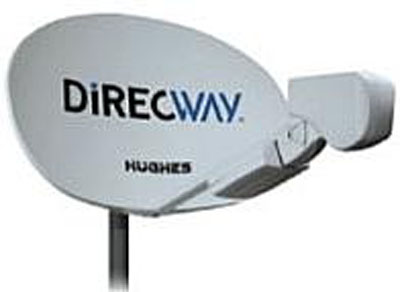 The dish is approximately 9 inches wider than my TV-Satellite dish and is more oval than round.

The manufacturer says that the FCC requires professional installation (??), so do-it-yourselfers won’t.

The installation kit comes with lags only, no bolts. If you want it secured in an area that has no solid tie in point, you’ll want to have 3/8″ bolts, washers and nuts on hand when the guy arrives.

Here are the functional parts of the system: 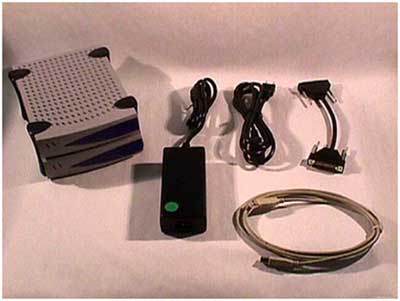 On the left is the receiver (top) and the transmitter (bottom), then the power
supply/converter, the patch cable to go between the two units, and the USB cable.

The receiver and transmitter units snap together with plastic mounts that are made to compliment the cases. By the way, the cases will fit inside a tower in the 5.25 slots. It’s a tight fit, but do-able. I would avoid getting them too close to your other components simply because each of them gets almost as hot as a busy hard drive. 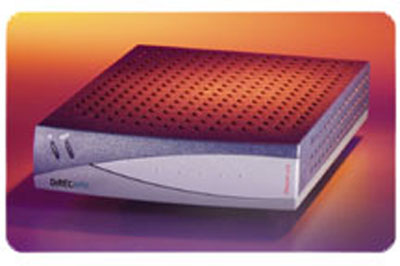 The front of each unit has two green LED indicators and the face plates are color-coded. The receiver is silver-faced and the transmitter is gold-faced. The LED lights flash to indicate data flow, but the one on the right, the “Ready” LED, also flashes to let you know that it is busy working on data.

Analog modem (used only once for commissioning the account on two-way systems; continuous connection required for one-way systems such as DW3000)

Click here
to get the actual pdf form/spec sheet for yourself.

What You Pay And What You Get…

Here’s what this normally costs:

Rain doesn’t affect the system very much at all. I lost two points of signal strength during a really bad storm.

Wind, on the other hand, can cause a temporary drop of up to 20 points, putting you way below what is the recommended minimum to have a “stable” connection.

Normally my system sits at about 55 to 61 on the signal strength bar, 40 is normal and 30 is absolute minimum for system operation. 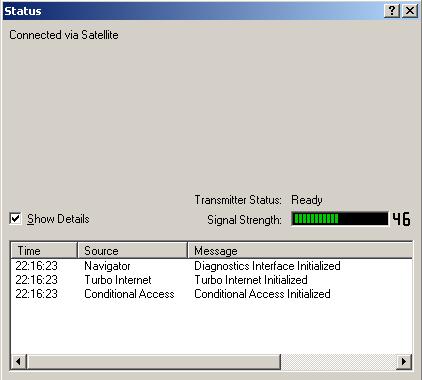 First and foremost, don’t even think about gaming with a satellite!!!

Earthlink’s web page says to discuss it with a counselor before purchasing. Well, my counselor told me that (and I quote) “Games like EverQuest and Dark Age of Camelot will be fine. But don’t try CounterStrike or Quake and stuff like that. The ping time is just way too slow. You’ll be fine in EQ.”

I have found trying to play CounterStrike, Quake, EverQuest, Dark Age of Camelot, Ultima Online, Head to Head Mech Warrior…. the list goes on and on…. a bad idea. The lag time from the time you tell the system to do something and the response actually makes it to the server and back is anywhere from one to 45 seconds.

In the mean time, you see your character running around and doing all the actions you “think” you are doing in the games, while everyone else sees you and your teammates laying dead in front of a bunch or players wondering why you did not shoot back.

I have tested this with friends on the phone while gaming. Typical conversation:

To add insult to injury, the satellite does not show a lag, so I was always at a ping of 0 while in-game.

The worst part is getting killed 30 seconds before your system even shows you are under attack.

The Web is No Better

If ups and downs make you seasick, you may want to take something to calm your stomach before watching the reaction times on the web also. Here’s a small list of the times, sites, locations and ping times that I got for typical web contacts that I use. (I used Neo Trace and TraceRoute for my test software).

(The game was still unplayable)

As you can see, ping time is not even close to acceptable for anything needing a decent contact and return signal. Could you imagine talking to a client on a webcam conference and not know whether he/she is actually talking to you or if they are just looking at the cam?

You may as well be on the Mars for these types of communications. (Ed.note: Actually, Mars would be worse, but this is a lot worse than being on the Moon.)

Downloads are supposed to be rather painless at 128K upload and 400+K download. To get an idea of real download speed, I decided to go to a site, www.iencentral.com, where I know they have large files and stable servers for their online flight sim game WarBirds III.

This sometimes gets me upset. Sometimes it’s feast . . .

I’ll just say that downloads can be a joy, or a real trial. I have even had a one megabyte file download in 7 seconds the first time, only to take 14 minutes the next try. Ugggh, what else can one say? Do moths flying in front of my dish cause lag . . . but it’s winter. Must be aliens.

Failure To Connect To Web Server

Failure To Connect To Web Server

The connection to the web acceleration equipment in the DIRECWAY Network Operations Center suddenly failed indicating a possible problem in that equipment. Retrying the web page may correct the problem.

The satellite link was operating properly up until the most recent web page request, but the last request could not be successfully sent across the satellite link to the DIRECWAY Network Operations Center. Possible causes for this include recent changes in weather conditions or equipment problems in the DIRECWAY Network Operations Center. Retrying the web page may correct the problem.

Last, but not least, the pop-up: 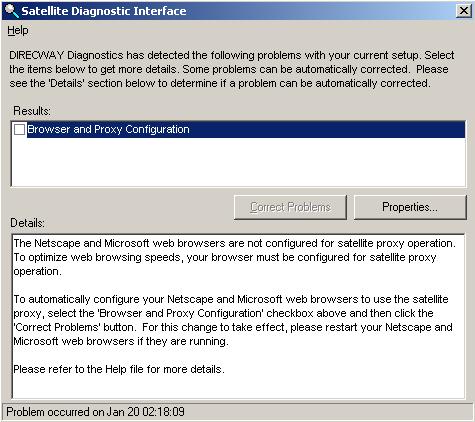 And trust me, no matter how many times you do the “Correct Problems” routine it describes in the box, it ALWAYS comes back later to say the same trouble is still there.

I feel that a friend just wasted $600.00 worth of Christmas present. When I make the call on Monday to cancel the service all together, if I don’t get some tremendous answers from tech support, then I will have wasted another $400.00 for the early cancellation.

The system may work great for someone who has no phone and is still using an outhouse, but if you live anywhere that has phone lines that at least connect at 14.4 bps, you are better off staying away from this infant technology.

It is too early and too young to be worth even one quarter of what they charge.

“Fold it or Search it, but for the sake of mankind, do something with the extra clock cycles”– Arkamedies

The article is here. Not a lot of news, which says something. Couple points are worth commenting on, though. Recession, Depression, Or Both? “Recently, spokespersons for several manufacturers mentioned that the past few weeks have seen a noticeable increase in

I Need A Date

The Horse That Wouldn’t Go Away These Palominos just refuse to leave. It’s been almost six months since AMD stopped making them, but they’re still around. This may or may not shed some light on when we might expect them

If you want to see the important number, go here and look at the very bottom of the page. Intel’s processor division held up pretty well considering. Total revenues were almost identical to last quarter, and I see no reason